Football
News
After a long absence, the Frenchman has returned as a key figure for Frank Lampard's men
Sean Cole
10:56, 08 Mar 2020

After two years, Olivier Giroud’s Chelsea career seemed to be over. Frank Lampard had made his decision and was determined to take his squad in a different direction. There was no room for an ageing striker who always gave his best but rarely scored.

Despite featuring in Chelsea’s first three league games, Giroud was soon a peripheral figure, not even guaranteed a place on the substitutes’ bench. Tammy Abraham made the starting spot his own with a run of goals and promising performances, while Michy Batshuayi was increasingly preferred as the back-up option.

Lampard extolled the virtues of youth, energy and mobility in his new-look team. Giroud was out of place in such a set-up. His movement was clever but not remotely quick. He couldn’t offer a threat in behind or close defenders down as readily.

It was widely accepted that his time at Stamford Bridge had run its course. Left out of Frank Lampard's squad for ten consecutive Premier League games, there didn't appear to be a way back for Giroud. Whether he was going to stay in England or not, a move elsewhere seemed inevitable.

Giroud had plenty of suitors, all with quite different ambitions. Aston Villa and Newcastle United wanted his experience to guide them to safety, while Tottenham Hotspur were keen for him to help fill the gap left in Harry Kane’s absence. Two Italian title-chasers, Inter Milan and Lazio, saw him as an impact player who could boost their attacking options.

In the end, as the transfer deadline approached, Tammy Abraham suffered an ankle injury and the goalposts suddenly shifted. Attempts to bring in Dries Mertens and Edinson Cavani were unsuccessful so Giroud had to stay put.

Michy Batshuayi was preferred for the 2-0 defeat to Manchester United but was withdrawn after an ineffective showing. Giroud replaced him and has since started Chelsea’s last four games. Gifted an unexpected opportunity just weeks after he was meant to leave, the 33-year-old has set about proving his worth to a manager who had given up on him.

So far, it’s worked. Giroud’s resurrection began with the opening goal in a 2-1 win over Tottenham and continued with a fine performance against Liverpool in Tuesday’s FA Cup tie. Acting as the springboard for so many attacks, Virgil van Dijk and Joe Gomez both found him awkward to defend against. He challenged for every ball and brought midfield runners into play.

Giroud has never been a prolific goalscorer but there's a reason why he continues to be such a key member of a France squad that boasts more talented alternatives. He recognises his limitations and adapts his game accordingly, providing a physical presence and a focal point for others to work off. He's a consummate team player and makes those around him perform better. 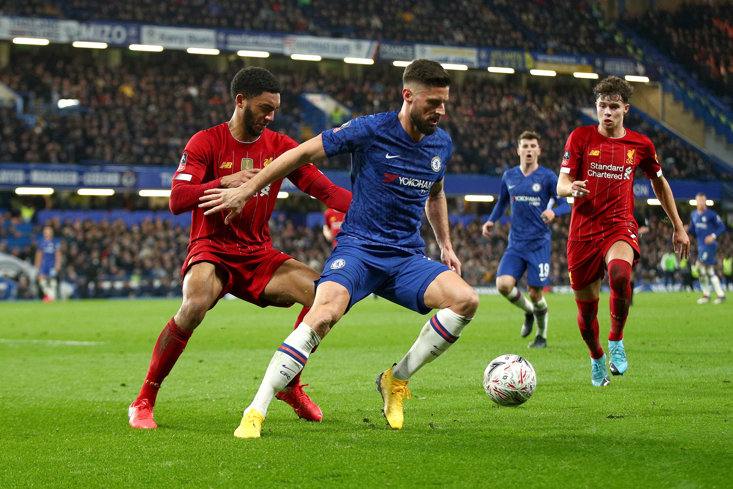 This was evident at the last World Cup, where Didier Deschamps resisted calls to drop his goalless striker. He stayed in the team as France emerged with the trophy, thereby emulating the role played by Stephane Guivarc’h in the same tournament 20 years earlier.

The best players in terms of individual ability don’t always make for the best team; it’s about finding the right blend. Attitude, awareness and work rate are important considerations, and Giroud contributes a great deal in this regard for both club and country.

That isn’t to underplay his technical ability either. A striker of his height and strength is commonly perceived as an old-fashioned target man – big, brutish and unsubtle. Although Giroud certainly wins his fair share of headers, there’s much more to him than mere aerial power. He’s an intelligent and dextrous player who can finish smartly in a variety of situations.

Nobody can forget his scorpion kick against Crystal Palace, which won the Puskas Award, and he demonstrated neat footwork to open the scoring in the FA Cup semi-final win over Southampton shortly after joining Chelsea. On the big occasion, he often delivers.

Giroud is by no means a long-term solution, and will no doubt surrender his place as soon as Abraham returns to fitness, but he’s once more stepped up when required. Against all the odds, he's back in favour and hopeful of playing an important role in Chelsea’s pursuit of a top-four place, and perhaps another trophy too. With his record in the FA Cup, anything’s possible.

He hasn’t ruled out extending his contract, which expires this summer, either. Considering how close Giroud came to leaving in January, it would be a remarkable turnaround, and one merited for his patience and professionalism in testing circumstances.