Boxing
News
The Sportsman spoke with Amir Khan ahead of his huge February clash with Kell Brook
Joey Mills
14:05, 28 Jan 2022

Amir Khan is back. The unfairly-maligned Olympic silver medalist and former unified world champion returns to fight long-time rival, first-time opponent Kell Brook in a fight that has been speculated about for years. After nearly three years out of the ring, it was the idea of settling this dispute once and for all that got ‘King Khan’ out of unofficial retirement. Speaking to The Sportsman during a pre-fight media conference, the Bolton boxer explained his motivations for climbing back into the squared circle.

“What brought me back was when all this talk was happening about the Kell Brook fight, it just kind of motivated me. I want to just shut him up. I want to really put a beating on him and show the public who the better fighter is. I mean through COVID, when everything was opened up again, everywhere I’d go people were talking about the Kell Brook fight. “When are you going to fight Kell Brook? When are you going to beat him? When are you going to put him in his place?.” I used to be like, “I don’t need to beat him. I know I’m the better fighter”. But people were like, “but we want to see that fight. We want to see it.” And that kind of gave me that push to make that fight happen. So a big thank you to Sky and Boxxer for making this happen.”

Many have criticised this fight for coming too late in each man’s respective career. Both have long since lost their world title belts, and have had a series of traumatic losses to Saul ‘Canelo’ Alvarez (Khan), Gennady Golovkin (Brook) and Terence Crawford (both). It turns out that agreeing upon a weight class for the fight was a major sticking point, and that this bout’s unusual 149lb catchweight is a result of these political squabbles. Khan explained these seemingly minor disagreements to The Sportsman, and outlined what changed to make the fight happen now.

“The reason why it's never happened is because of a few little things that we've never really agreed on. The weight was one issue. Obviously, I was never happy making 149. I agreed to it, because I look the bad one. When I say I'm not going to do the fight because it's not at 147 then people are like “But it’s two pounds”. But two pounds makes a massive difference. You know, people don't understand that especially when you cut your weight. So I thought, “You know what, I'm just gonna go ahead with it. I'm going to go ahead with it. We're going to make the fight happen.” And I agreed on everything that they wanted. So I’m glad we’ve got here now. We’re only four weeks away from the fight now. We’re both going to be in the ring and people are going to get to see the fight they want to see.” 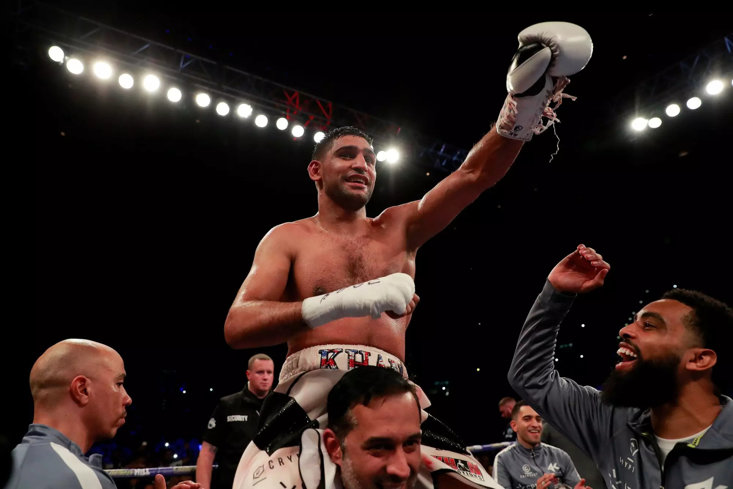 Boxing is often a confirmation of the axiom ‘speed kills’, and Khan’s carry is testament to that. The Bolton speedster has befuddled many a foe with dazzling, swift combinations down the years. But after joining up with new trainer Brian ‘BoMac’ McIntyre, who also handles former conqueror Terence Crawford, Khan has added layers to his game. The former WBA and IBF light welterweight boss offered us an insight into his preparations for the Brook clash.

“I'm not going to rely on my speed, because I think we need a little bit more than speed to win this fight. We know that Kell has decent timing, we know he's a good boxer. He has decent speed himself as well as power. But I think when it comes to what I’ve learned in these last couple of months being here, it's about knowing the right positioning and knowing when to throw the right shots at the right time. Also working on a little bit more power sitting down on more shots. Having a game plan that you're gonna stick with throughout the whole fight. Sometimes when you’re told the game plan you have to kind of think about sticking to it. But this is a game plan for the Kell Brook fight, which I don't have to think about. It’s part of the training regime that we've been doing every day, so it's gonna come so naturally.”

For all the talk of the fight arriving too late, there is immense interest in seeing two of Britain’s modern greats square off. The fight sold out the AO Arena in Manchester in record time, with a bumper pay-per-view payday also expected. Khan seems focused, seeking self-improvement at the age of 35 by learning new tricks from a trainer who once masterminded his downfall. It remains to be seen whether Amir can back up his plan to “shut up” Kell Brook, but the fight will undoubtedly be exciting despite arriving later than we had hoped.

For more on Amir Khan vs Kell Brook, as well as this week's biggest boxing stories, check out Split Decision. A brand new boxing podcast from The Sportsman.