CHANGINGOFTHEGUARD – One of three in the race for eight-time winning trainer Aidan O’Brien and an impressive six length winner of the Chester Vase. Taking the same route as connections 2013 winner Ruler Of The World and has plenty of stamina. Major player.

DESERT CROWN – Big ante-post plunge horse who won his maiden last year at 11/1. Striking success in the Dante at York and bids to be the third Sir Michael Stoute trained winner of that race to win the Derby. Would be a popular success on many levels and while having major claims, price is a little cramped.

EL HABEEB – Listed fifth on debut but may need to start now to play a hand.

GLORY DAZE – Off the mark at fourth attempt on seasonal return but put in place by Stone Age at Leopardstown and more exposed than most.

GRAND ALLIANCE – Second in the Blue Riband Trial at the track, a half length behind Nahanni after winning a Doncaster Handicap. Not a usual path to victory and has plenty to find on the leading contenders.

HOO YA MAL – Useful juvenile but had limitations exposed in classic trials this year. Also has stamina to prove.

MASEKELA – Stamina doubt on breeding but runs like further will suit. Took a while to get organised at Newmarket when favourite on seasonal debut and was only just held by Native Trial as a juvenile. Has the form to be competitive and may have more behind than in front at the line 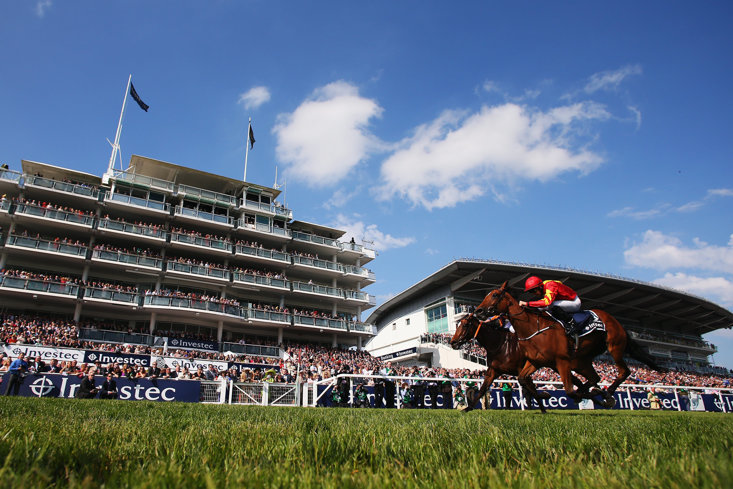 NAHANNI – Winner of the Blue Riband Trial so automatic entry into the race. We know he stays, handles the track and represents last year’s winning Jockey/Derby combination but form doesn’t quite stand up to the best on offer. Can still run well and has frame claims.

NATIONS PRIDE – Stable companion of Nahanni and won his last four by a combined eighteen lengths. They were all small fields but is the choice of William Buick from three possible and has been supplemented at a cost of £75k. There has been strong vibes from the camp in the last fortnight and is another major player in a wide open Derby.

PIZ BADILE – Rallied well to win the Ballysax Stakes at Leopardstown but that form let down badly in the Irish 2000 Guineas. Promises to stay and is the mount of Frankie Dettori so guaranteed supporters.

ROYAL PATRONAGE – Beat 2000 Guineas hero Coroebus in the Royal Lodge last year and a fair eighth in the season's first classic. Three lengths behind Desert Crown in the Dante and with stamina in the dam’s side, could improve to reach the places at a decent price.

SONNY LISTON – Bolted up on debut at Sandown last July and not seen again as a 2yo. Well held on seasonal return at Newmarket and again in the Dee Stakes at Chester. Needs to find something with hopes pinned on an extra trip.

STAR OF INDIA – Impressive Dee Stakes winner at Chester and only blip came in the Craven. Looks like the third string of Aidan O’Brien’s but that hasn’t prevented them from winning before.

STONE AGE – Second in Saint Cloud Group 1 in October and made no mistake with two scorching successes this term, by an aggregate of fourteen lengths. Looks stable main hope after Luxembourg was injured and major claims of giving trainer a ninth Derby success.

WALK OF STARS – Still green when a beaten favourite at Lingfield but appeared to handle the track well enough. Beat expensive stablemate on seasonal return at Newbury and is not easily discounted but does need to find some improvement in the last month.

WESTOVER – Carries the famous Juddmonte silks and narrowly won the Sandown Classic Trial in April. Lively outsider but not fared so well with the draw as no winner has been drawn 2 since stalls were used which is a major negative.

WEST WIND BLOWS – Unbeaten in two starts, both in novice contests so a world away from what’s required here. Five length victory last time though and is a total unknown quantity who has been the subject of bullish reports from trainer. Another interesting outsider.

SUMMARY – A large field of 17 will line up for the 243rd running of the Derby and Desert Crown would be a topical winner on the Queen's Platinum Jubilee weekend. He has huge claims on his Dante win and has been the talking horse for most of the season. Two of Sir Michael Stoute’s Derby winners took the same route and he is a worthy favourite, but short enough.

Stone Age has impressed this season, but I prefer CHANGINGOFTHEGUARD of the Aidan O’Brien trio and he just edges the call for me with his assured stamina a big asset. He ground it out from the front at Chester, an excellent trial for the Derby and the trainer has reached for the cheekpieces to aid his focus and eke out some more improvement.

Royal Patronage was three lengths behind the favourite at York and could run into a place at a big price, as may Masekela for those betting the four places on each way bets with Betfred.