David Silva has announced he will leave Manchester City at the end of the 2019/20 season which will mean he’s spent a decade for him at the club.

The Spaniard has been instrumental in the revolution at City, a key component of their success over the past decade. But as he turns 34 in January, he has decided to call it a day.

Next season, Silva will look to win his third Premier League trophy on the bounce and his fifth in total, in a time when City have transformed from the ‘noisy neighbours’ to the dominant force in English football. Last season’s unprecedented domestic treble was an unbelievable achievement that no other side has matched in the modern era, but there is one trophy missing from Silva’s collection and one he will be desperate to get his hands on next season, the Champions League.

Silva, along with Vincent Kompany, has embodied the progress that City have made over the past decade. Having been brought to the club by Roberto Mancini in the summer of 2010 for £28m, many fans were unsure whether his silky Spanish playing style would be suited to the Premier League. Little did they know that a decade later he would have won almost everything and become their greatest ever player.

That phrase is not one that I use lightly and City, perhaps contrary to popular belief, have had many club legends during their illustrious past. Colin ‘The King’ Bell made 500 appearances for the club in the 1970’s, Bert Trautmann turned from prisoner-of-war to FA Cup hero and Peter Doherty was arguably their most talented player pre-2000.

In the modern era, players like Shaun Goater, Shaun Wright-Phillips, Richard Dunne and Vincent Kompany have all endeared themselves to the City faithful, but nobody has possessed the technical ability, skill on the ball or ability to change a game that Silva has over the past nine years.

His ability to control a game with clever touches, somewhat in the mould of the great Andres Iniesta, has made City a joy to watch in recent years. If football is art then Silva is Manchester’s Michelangelo, his brush is his wand of a left foot and his canvas the Etihad pitch.

Manchester City season ticket holder Pete Marsden shared his views on Silva’s departure with The Sportsman: “Honestly watching him over the last ten years has been an absolute pleasure.

“I’ve never seen someone play so consistently for us at such an incredibly high level. The man makes football look like the easiest game in the world and it’ll be a shame when he’s gone, but we have the perfect replacement in Foden.

“In terms of being City’s greatest, I never got to see Colin Bell play but I don’t believe I’ll ever see someone as good as David Silva play for us again.”

Perhaps it is testament to Silva’s brilliance that City fans already appreciate how good he is and how much he will be missed at their club, far too often players are only cherished once they have left. This way every Silva touch next season will be cherished by his adoring fans and he will get the send off he truly deserves.

Football on BT Sport
@btsportfootball
The good news: There's still one more season of David Silva at Manchester City 😁
The bad news: That's all you're getting ☹️
Next season will be the Spaniard's last in the Premier League 🎩👏 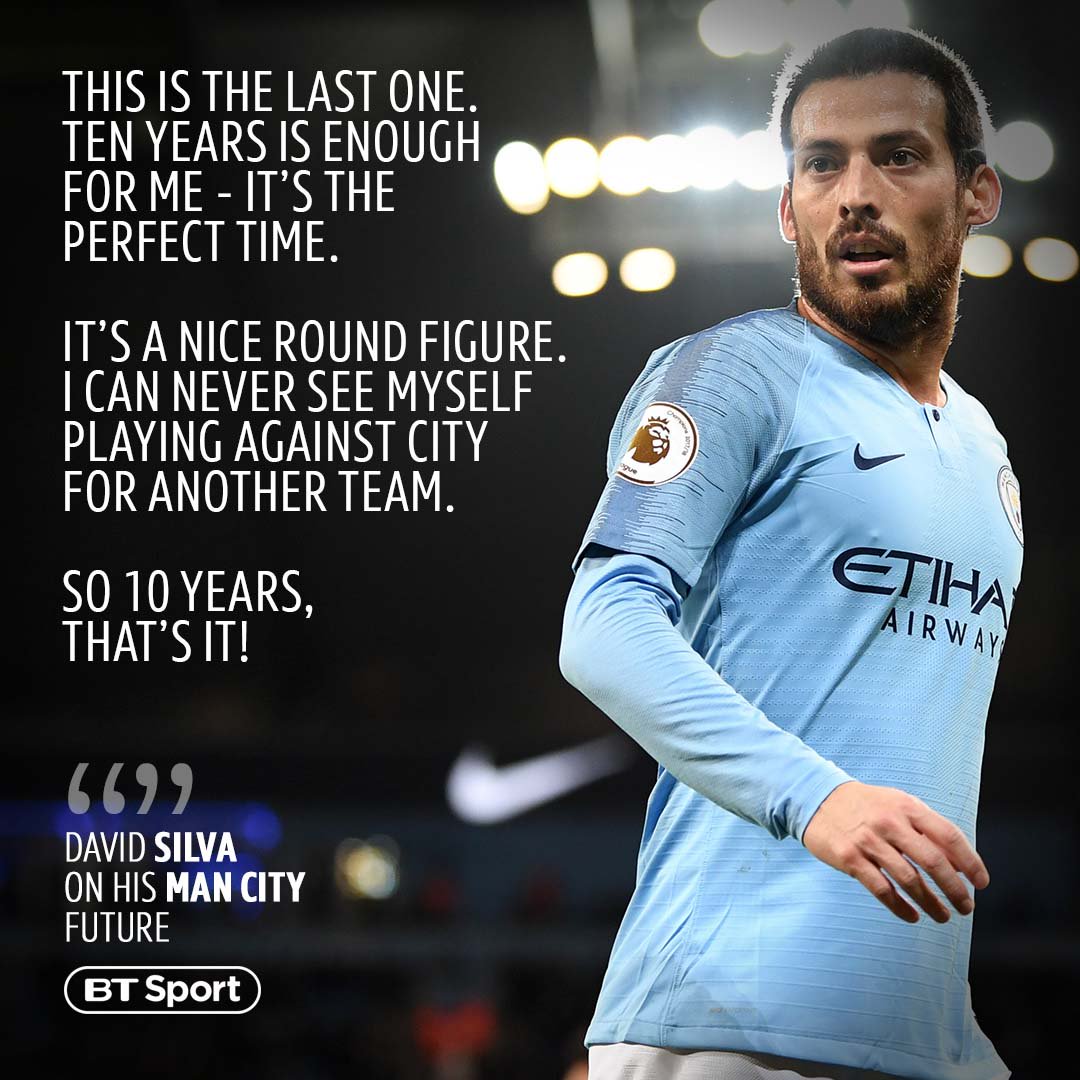