“Lend your platform to other people, lift other people up, share your success, we have a unique opportunity different to any other sport in the world, to use this beautiful game, to actually change the world for better.”

And with that, Megan Rapinoe signed off a bar-raising speech.

The United States’ World Cup-winning captain collected the award for Women’s Player of the Year at the FIFA Best Awards in Milan, Italy, and in speaking out so passionately and defiantly she set a new precedent. Expectations at sports ceremonies have now changed.

Less than two months into the brand new seasons across Europe’s major leagues, the ordinary football fan may be forgiven for avoiding awards nights. They are normally little more than a continued celebration of the privileged, the great and the greatest, with further gushing adoration for over-indulged professionals.

It was two recipients of FIFA awards at the Teatro alla Scala opera house in Milan who ultimately defied expectations. The pair commanded the most attention, injecting a much-needed legitimacy as well as setting a moral benchmark to the often fantastical circus of the awards ceremony.

In September 2016, Rapinoe attracted the ire of the US Soccer Federation by showing solidarity with NFL player Colin Kaepernick by kneeling during the US national anthem ahead of an international game with Thailand. Three years later at The FIFA Best Awards, the same guts and gaul were once again brilliantly on show.

In a venue which has hosted some of the world’s leading operatic talents, Rapinoe’s voice was just as loud and as powerful.

The winger was the exceptional talent at this summer’s World Cup in France, winning both the Golden Boot and the Golden Ball for best player at the tournament. Remarkably she mirrored peerless pitch performances with an off-field audacity by going tête à tête with the White House, a place she was adamant she was “not f*cking going to” should the USA win the tournament.

In Italy, Rapinoe used her platform as one of the most recognisable sporting personalities on the planet.

Firstly, to applaud her football colleagues Raheem Sterling and Kalidou Koulibaly for their respective stances in the face of racism, and then to address her fight as a woman of the LGBTQ+ community.

“I feel like that’s my ask of everybody. We have such an incredible opportunity, being professional football players. We have incredible platforms. I ask everyone here – lend your platform to other people, lift other people up, share your success.

“We have a unique opportunity in football to use this beautiful game to actually change the world for better. I hope you take that to heart, and just do something, do anything. We have incredible power in this room.”

Her words and message have provoked praise from her peers.

“This message is clear. Thank you again Megan Rapinoe, for leading the way on and off the pitch. Congratulations [on] this amazing achievement.” proclaimed Wolfsburg goalkeeper Hedvig Lindahl, whilst Rapinoe’s compatriot Meghan Kingenberg produced the simple but profound statement: “Thanks for using your platform for more than football.”

Rapinoe, however, wasn’t the only figure to draw attention to matters outside of celebrating football. At the same ceremony, manager Jurgen Klopp won the award for Best Coach for his 2018/19 Champions League winning exploits with Liverpool.

In the subsequent speech whilst family were duly checklisted, as well as showing humility and modesty in saluting the work of runner-up Mauricio Pochettino, the charismatic German, never one to shy away from a soundbite, diverted the attention of his own achievements elsewhere.

“I want to use this stage to say one thing. Today is an individual prize. I don't 100% understand individual prizes but I get it. I'm here for a lot of people but we are all on the really good side of life. That is why we are here, legends.

"The past was great, the present is really good and the future will hopefully be good for us as well. But there are people out there who don't have the situation. I am really proud to announce from today I am a member of the Common Goal family."

The Liverpool Echo subsequently reported on the website crash as online attention to this last bit of information avalanched, and ‘Common Goal’ illustrates its mandate simply:

“Members pledge 1% of their earnings to a central fund. And together we allocate this fund to high-impact organisations that harness the power of football to advance the United Nations Global Goals.”

This initiative relates to the 17-step plan decided by world leaders In 2015. With an ultimate 2030 projection, these goals include ending poverty, removing famine and hunger, and providing clean water and sanitation, as well as such objectives as improving gender equality and economic growth worldwide. That 1% donation supports a group of 120 charities working on social projects across 80 countries, an idea established through the charity streetfootballworld and supported and brought to mainstream attention by footballer Juan Mata.

Klopp is just the second men’s football manager - after RB Leipzig’s Julen Nagelsmann - to join the cause.

Unsurprisingly, Rapinoe is also one of the 180 supporters of  Common Goal, and in the manner of collecting The Best FIFA Women's Player on the night, the World Cup winner has gone on to share the majority of the headlines with the Liverpool gaffer, for all the right reasons.

In the summer Donald Trump despairingly attempted to curtail Rapinoe’s rhetoric and position of power in the sporting spotlight;

“Megan should WIN first before she TALKS!”

She did. She won everything.

She talked as she won, and she won as she talked.

Rapinoe and Klopp have now helped set a precedent and helped fuel an expectation of the responsibility of the football community. The annual rigmarole of the awards show might very well become less back-slapping than a much welcome cause célèbre, provoking debate and interest in matters outside of the sport.

A footballer who perfectly balances ability with activism, performance with philanthropy? 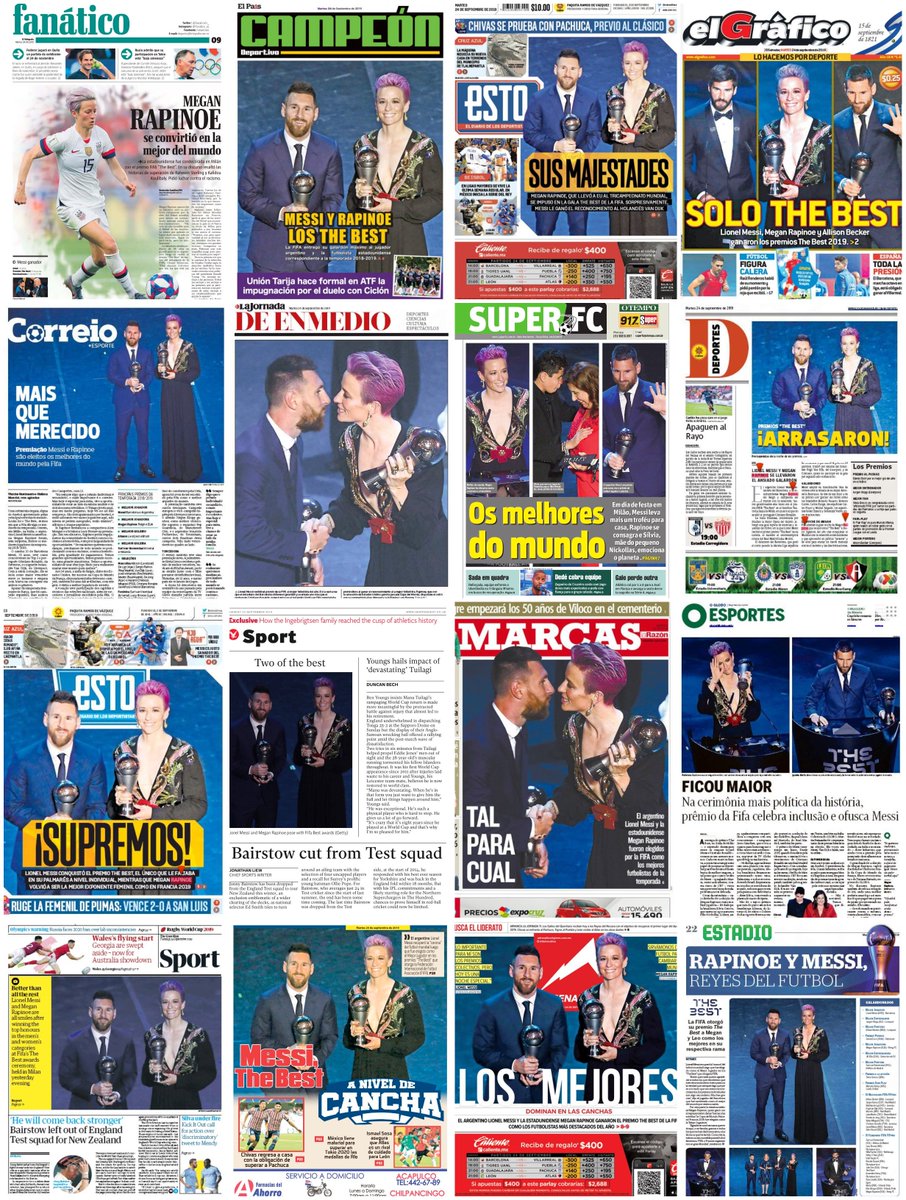 3
9
More
football
Book Review - King Eric: Portrait Of The Artist Who Changed...
Leeds. Irwin. £1million. Title. Double. Palace. Kick. Ban. Seagulls. Return. Liverpool. Double. [ ... ]
football
Replacing Rapinoe And Morgan? The Ladies Who Can Light Up The...
Write off 2020. The best thing about it is remembering how good 2019 actually was. One of the undeniable [ ... ]
football
Wembley Woe: When England Lost To Germany At Euro ‘96
In the summer of 1990 England tasted their first ever penalty shootout heartbreak when they went out [ ... ]
football
Get Ready For A Nostalgia-Fest With Italia '90 Podcast Vincerà!
Hosted by Mark Godfrey and running from June 8th to July 8th, Vincerà! is a 24-part podcast series [ ... ]
football
Harry's Heroes, Vinnie Jones And Revenge At The Battle Of San...
When Vinnie Jones started crunching San Marino players left, right and centre, it was clear the friendly [ ... ]
football
Prodigal Talent Of The German Game Is Turning RB Leipzig Into...
This article first appeared in The Sportsman on 07/12/19 What were you doing at the age of 28? If it [ ... ]
football
''I Was Really Wasted'': When Jurgen Klopp Woke Up Hungover...
This article first appeared in The Sportsman on 05/09/19 Anyone watching the Amazon Prime documentary [ ... ]
football
Book Review - Yer Joking Aren't Ya?: The Story Of Middlesbrough's...
In 1997, Middlesbrough Football Club reached the finals of both the League and FA Cup, had the might [ ... ]
football
Carragher's Brilliant Podcast Shows The Greatest Games Are The...
What’s the greatest football game you’ve ever seen?  Jamie Carragher doesn’t [ ... ]
football
Red Bull And The Football Training Centre Of The Future... Today!
It is now 33 years since Red Bull sold its first ever energy drink. Pre-April Fool’s Day 1987 [ ... ]
football
On This Day Messi's Barcelona Tally Hits 500 In El Clásico Triumph
If you’re going to hit a milestone, and one that no one in your club’s illustrious history [ ... ]
football
The Secret Behind The Success Of Lineker, Shearer And Wright's...
The unavoidable hiatus to the broadcast of the BBC’s flagship football programme will not deny [ ... ]
football
Neymar Jr... Junior! Santos Like The Look Of Ronaldo-Imitating...
On March 7 2009, a slightly-built 17-year-old from Mogi das Cruzes, São Paulo, walked out onto [ ... ]
football
Business As Usual: A Beginners Guide To The Belarus Premier...
If you’re going out of your mind without your football fix, well we’re sorry you just haven’t [ ... ]
football
Why June 30 Could Be D-Day For The Fate Of Premier League Season
England captain Harry Kane has added his voice to the growing calls for the Premier League season to [ ... ]
football
You Heard It Here First - Brescia's Sandro Tonali Is Italy's...
Since winning the World Cup in 2006, it has been turbulent time on the international stage for Italy. [ ... ]
football
A Reunion With Ancelotti Could Resurrect Rodriguez's Stuttering...
No club chews up and spits out world class players quite like Real Madrid. Yet, their sense of entitlement, [ ... ]
football
'Quickly Kevin' Is The 90s Football Nostalgia Podcast To Beat...
While the majority of sports podcasts scramble to fill the minutes within the disruption of the [ ... ]
football
Where Did It All Go Wrong For Phil Neville And The Lionesses?
Winning, Phil Neville recently said at the SheBelieves Cup, is what would bring England’s women [ ... ]
football
''Drop A Few Hand Grenades'' Keegan's Advice To Scholesy The...
A packed out Wembley roared like one of those indomitable Three Lions to greet England’s new messiah. [ ... ]
football
Rise Of The Couch Coach: Coronavirus Causes 119% Surge In Football...
Thousands of us are flocking to virtual reality and gaming to help fill the void of no live football, [ ... ]
football
Review: Diego Maradona - Drop Yourself Into The Great's Chaotic...
When Diego Armando Maradona arrived at Napoli in 1984 for a world-record fee, the entire city ground [ ... ]
football
Arsenal's Tough Choice - Is Donyell Malen The Ying To Aubameyang?
Arsenal’s inability to manage the contractual situations of their biggest stars has plagued them [ ... ]
football
Robbie Fowler Is Making His Mark As A Manager With Brisbane...
The curtains came down on one of the last bastions of football standing in 2020 this week. Before the [ ... ]
football
Long Live The King: Eric Will Always Be Manchester United's...
“If ever there was one player, anywhere in the world, that was made for Manchester United, it [ ... ]
football
I Was There - The Day Football Came Home To Wembley
The closest I ever got to attending the original Wembley Stadium was on its final day in operation in [ ... ]
football
'Sunderland Til I Die' Heads To The Boardroom In Netflix's Second...
The docks have been left deserted. The wealth has dried up. Wearside has become an impoverished place [ ... ]
football
How Chief Creator Silva Became New Face Of Premier League
Football has been cast into uncertainty by the coronavirus pandemic. As it stands, nobody is sure if [ ... ]
football
Lookback:Chelsea 6-0 Arsenal When Arsene's 1000th Game Went...
It was supposed to be an occasion to celebrate for Arsene Wenger, but his 1000th game in charge of Arsenal [ ... ]
football
Ronaldo, Kane, Hazard - The Winners And Losers Of Euro 2020...
So as of this week Euro 2020 became Euro 2021. Another casualty of the global Coronavirus epidemic. [ ... ]
This website uses cookies
Cookies help us and our partners provide statistics. By browsing this website, you consent to the use of cookies in accordance with our Privacy Policy and Cookies Policy.
Accept & Close