After more than a year away from the ring, former heavyweight world champion Andy Ruiz Jr is back on track with his eyes firmly “focused on the prize” says his trainer, who also believes that Tyson Fury can provide the inspirational blueprint for a successful comeback.

Ruiz Jr stunned the world in June 2019 when he stopped Anthony Joshua in seven rounds at Madison Square Garden for the IBF, WBA, WBO and IBO belts but a lack of motivation and a party-heavy lifestyle meant that Ruiz turned up to the rematch in Diriyah six months later overweight and a shadow of his former self, conceding the belts in a unanimous decision defeat. 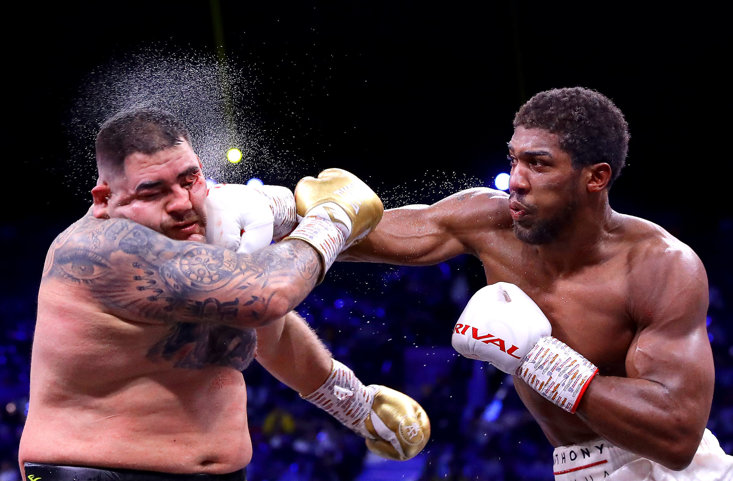 It’s a situation Fury is familiar with. Having been crowned heavyweight champion of the world against Wladimir Klitschko in Dusseldorf in 2015, his own weight ballooned amidst personal mental health battles, but after a stunning comeback over the last few years, the Gypsy King is now the WBC king and is on the verge of a huge unification bout with Joshua later this year.

Ruiz’s trainer, Jorge Capetillo, has trained the Mexican-American for most of his biggest fights and is also close to Fury having worked in the Brit’s corner against Otto Wallin, even saving the 32-year-old from disaster by keeping a horrendous cut above his eye under control. Had Fury not had Capetillo at his side, his unbeaten record might not still be intact. 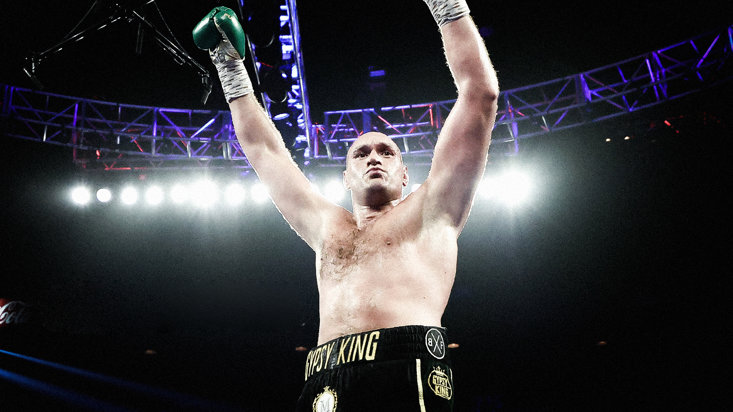 Having benefited from working with both men and experienced generosity from each, Capetillo believes that if the two men were to meet outside of the ring, it would be invaluable motivation for Ruiz. "It would be huge for me, professional and personally, if they could share the gym, share a chat, share how their families are," Capetillo told Sky Sports about Ruiz Jr and Fury. "It would be positive motivation for Andy.

"Andy knows that Tyson has also taken care of me. Andy speaks highly of Tyson. They share the same faith too.

"Andy, like Tyson, is a man of faith and family. We all make mistakes. They have a good feeling for each other.

"This is what life is about. We make mistakes, we fall down, but we have to get up and move forwards.”

It is important for Capetillo that Ruiz understands that his first win over Joshua wasn’t just luck and that the 31-year-old deserves to be amongst the heavyweight elite. He added, “A fighter never loses because they get knocked down. They lose because they don't get up.

"I want Andy to prove to himself that it was not a lucky shot. Because it was not lucky, let me tell you, because Joshua went down but got back up. Joshua didn't run. But you saw what happened.

"I would love to see Andy as a champion again."

x
Suggested Searches:
Tyson Fury
Manchester United
Marcus Rashford
Lewis Hamilton
F1
Air Jordan
More
boxing
Claressa Shields Makes History By Becoming Undisputed Champion...
Was it ever in doubt? Claressa Shields made boxing history as she became the first person to be undisputed [ ... ]
boxing
The “GWOAT” Claressa Shields Targets A Place In The Boxing History...
Claressa Shields, boxing’s self-proclaimed ‘GWOAT’ (that’s the greatest woman [ ... ]
boxing
Chisora Vs Parker Heading For May After The Pair “Pinkie Promise”...
After a nasty spider bite put a halt to their scheduled bout in 2019, Dereck Chisora and Joseph Parker [ ... ]
boxing
''All Points Agreed'' On Joshua Vs Fury - Five Boxing Stories...
All systems are go for the biggest fight of a generation, there’s some good fights brewing in [ ... ]
boxing
Tommy Fury Should Focus On A Promising Career In Boxing, Not...
With good looks, bundles of boxing ability and crossover appeal thanks to his stint on Love Island, [ ... ]
boxing
Billy Joe Saunders Beating Canelo Is About The Perfect Game-Plan,...
Billy Joe Saunders’ trainer Mark Tibbs believes his fighter can overcome Mexican superstar Saul [ ... ]
boxing
Andy Ruiz Jr Returns To The Ring After 16 Months Out With Peculiar...
Andy Ruiz Jr is finally set to return to the ring after 16 months away when he takes on fellow Californian [ ... ]
boxing
Anthony Joshua Names Tyson Fury Date - Five Boxing Stories From...
Saturday night belonged to Saul ‘Canelo’ Alvarez and Sunday was all about his upcoming world [ ... ]
boxing
Canelo Stops Yildirim In Miami To Set Up Collision Course With...
Saul ‘Canelo’ Alvarez will face Billy Joe Saunders in a world title fight on May 8 after [ ... ]
boxing
Joseph Parker Wins Battle Of New Zealand To Set Up Chisora Clash...
It certainly wasn’t pretty but Joseph Parker emerged victorious from his all-Kiwi heavyweight [ ... ]
boxing
Canelo Targeting Legacy-Cementing 2021 If He Can Overcome Yildirim...
The first fight in a potentially blockbuster year for Saul ‘Canelo’ Alvarez takes place [ ... ]
boxing
Canelo Expects Avni Yildirim Will Try To ''Knock His Head Off''...
Saul ‘Canelo’ Alvarez returns to the ring this weekend when he defends his WBA, WBC and [ ... ]
boxing
Chisora, Usyk And Joyce Could Await Joseph Parker Should He...
The battle between long-time rivals Joseph Parker and Junior Fa in Auckland this weekend (February 27) [ ... ]
boxing
Fury “Not Optimistic” On Joshua Fight, Five Boxing Stories You...
Not everyone is convinced that the biggest fight in British boxing history will take place this year, [ ... ]
boxing
From Canelo To Arturo Gatti, Five Of Floyd Mayweather’s Best...
Undefeated in 50 professional fights, the winner of 15 major titles in five different weight-classes [ ... ]
boxing
Billy Joe Saunders Could Be The Man To Give Canelo Problems,...
It’s always a big week in boxing in the build up to a Saul ‘Canelo’ Alvarez fight [ ... ]
boxing
Josh Warrington Prepared To “Call It A Day” If He Loses Rematch...
Josh Warrington’s career was dealt a huge blow earlier this month when he was shockingly stopped [ ... ]
boxing
New Date Set For Whyte v Povetkin, The Weekend's Five Biggest...
It was heartache for Josh Kelly, Eddie Hearn had a warning for Deontay Wilder, while the Rumble on the [ ... ]
boxing
Josh Kelly’s Long-Awaited Moment Of Truth Dashed By Avanesyan...
Boxing is a cruel sport. Josh Kelly had to wait 26 months for his moment and it was all over in just [ ... ]
boxing
After 26 Months Of Delays, Kelly v Avanesyan Is Going To Be...
It’s taken the best part of three years but fight fans will (touch wood) finally get to see Josh [ ... ]
boxing
The WBO Orders Usyk Vs Joyce, Five Boxing Stories You Might...
Carl Frampton’s bid to become a three-weight world champion will have to wait a little longer, [ ... ]
boxing
Josh Kelly Fully Focused Ahead Of Long-Awaited Shot At European...
“I’m going to go in there and I’m going to be the best version of Josh Kelly. I don’t [ ... ]
boxing
Josh Kelly Will “Completely Outbox” David Avanesyan, Says David...
David Coldwell has backed Josh Kelly to defeat David Avanesyan when they meet in the ring this Saturday [ ... ]
boxing
Wilder Vows To Clean Out Heavyweight Division, Targets Fury,...
Deontay Wilder has vowed to clean out the heavyweight division, naming Tyson Fury, Anthony Joshua and [ ... ]
boxing
Josh Kelly's ''Found A New Gear'' Ahead Of The Toughest Fight...
It’s been a long two years for Josh Kelly but, at last, the Sunderland welterweight will return [ ... ]
boxing
The New Four Kings? Boxing's Lightweight Division Is Heading...
During the 1980s, a quartet of boxers reignited a sport that was dying. As the world crossed the borders [ ... ]
boxing
Josh Warrington’s Bid For Featherweight Supremacy Dealt Blow...
Josh Warrington’s plans to take on Can Xu and Gary Russell Jr in super-fights that would help [ ... ]
boxing
Josh Warrington Hopes A Victory Over Lara Will Help Make His...
Josh Warrington is ready for his much-anticipated 10-round featherweight bout with Mauricio Lara but [ ... ]
boxing
Josh Warrington To Pay Tribute To Rob Burrow With Special Shorts...
Josh Warrington will carry a tribute to Leeds Rhinos icon Rob Burrow when he faces Mexican Mauricio [ ... ]
boxing
Eddie Hearn Teases Return Of Fight Camp, Five Boxing Stories...
Another Brit will be in a huge world title fight in the coming months, Daniel Dubois has changed trainers [ ... ]