Football
News
The former Arsenal goalkeeper has been in imperious form for the Villans this season
Simon Lillicrap
19:46, 06 Mar 2021

Emiliano Martinez, this season, has without a doubt been the best goalkeeper in the Premier League. He proved his top class credentials with his 14th clean sheet of the season, the second-highest in the division, in Aston Villa’s goalless draw with Wolves, and perhaps showed Arsenal once again that they were wrong to let him go this summer.

His close range save from Conor Coady to earn a point was outrageous. The Wolves captain controlled the ball on the spin in the penalty box and poked the ball towards goal but, with seemingly no time to react at all, Martinez managed to get down and push the ball around the post. Yet again, Villa relied on the goalkeeper to save them this season and although he has organised a solid backline in front of him, once again he was the standout performer.

The way he commands his area, comes for crosses and stops shots is impressive, but perhaps his organisational skills go under the radar. In front of him, Ezri Konsa and Tyrone Mings form a solid partnership and while Martinez always demands perfection, you can see how much it means to the entire back four. When Matt Targett got a vital touch to a Wolves cross in the last minute to deny a goalscoring opportunity, his reward was a big kiss on the forehead from his goalkeeper. The Argentine just loves clean sheets. 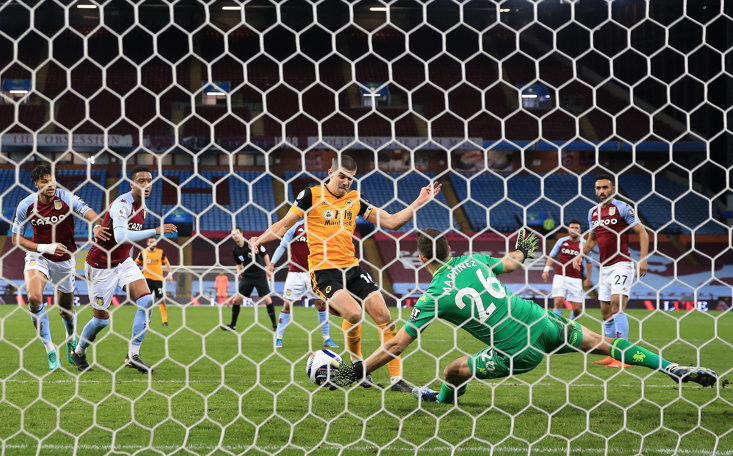 Villa’s summer transfer business was admirable. Ross Barkley and Ollie Watkins brought attacking intent while Matty Cash, one of the Championship’s hottest properties joined as a top class right-back from Nottingham Forest. Although seen as a sensible signing, few saw the £15m they spent on Martinez as a transfer that would change the course of Villa’s season. He has been nothing short of remarkable.

Statistically, the numbers back up his performances. He has the highest save percentage in the league (78.6%) and given he is only behind Manchester City’s Ederson in the race for the Golden Glove, you can see the value he has brought to this Villa defence. His move away from Arsenal where he spent eight years and was sent on six loan spells is without a doubt, the best decision he has ever made.

Despite impressing when given the chance at the end of last season, Bernd Leno was chosen as the number one for this term, forcing the Argentine to leave.

“I love everything about Arsenal,’  Martinez told Sky Sports. “I still love them and I’m still watching the games, but I just felt like they didn’t trust me like they should have.

“They didn’t say to me that I wasn’t going to play, they just didn’t guarantee me the games that I wanted to play.”

Villa, who had tried out Tom Heaton, Pepe Reina, Orjan Nyland and Jed Steer in between the sticks last term, knew they finally had a chance to secure a top class goalkeeper and promised him the first team football. That was enough to make the move a reality and neither party have looked back since he made the move from London to Birmingham.

Ederson, Alisson and David de Gea all have their different qualities, but Martinez is better than all of them this season. Arsenal must feel a tinge of regret that they let the best goalkeeper in the league walk out the door last summer.