Anthony Joshua’s training camp for his rematch with Andy Ruiz Jr is going great guns, with reports emerging that he's knocked out several of his sparring partners in the build-up to the fight.

American heavyweight Timothy Moten, who has a similar frame to that of the Mexican champion, has been training with Joshua over the past three months and told Sportsmail about the brutality of AJ’s sparring sessions.

“There have been guys here, I don't want to say any names, but I've seen guys come into the camp, get blown away and get sent home that same week. He's dropped a few of his sparring partners and he's rocked a lot. Joshua is by far the hardest hitter I've been in the ring with.”

Moten himself has shared more than 60 rounds with the British boxer in an attempt to teach the 6ft 6in giant how to deal with a smaller fighter like Ruiz. In the first fight, the Brit was caught on the inside by the powerful puncher, who got up from a third-round knockdown to hand AJ the very first loss of his professional career. 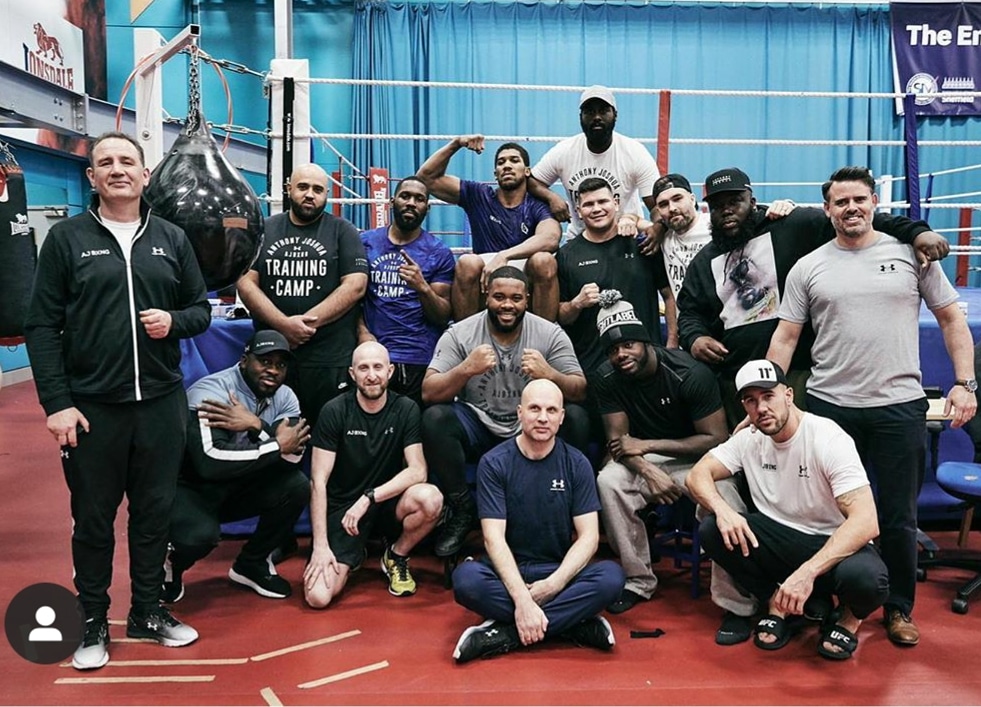 “Almost every session I ask him how he's doing, what he's thinking,' he continued. “He says to me, ‘Ready, ready’. Mentally he is in a good place. I can see that in his eyes. He's got a focus I've not seen.”

This loss seems to have focused AJ, who is keen to take things back to basics in the rematch, and the shock loss could be the making of his entire career.

“I think he may have needed that wake-up call. He needed to get that hunger back and I'm telling you, it's there again. He's got that warrior's spirit. His mentality is to destroy. He is like a focused, caged lion and when the time is right, he will unleash."

Last week, we spoke to AJ's 2012 Team GB teammate, Luke Campbell, who described to The Sportsman just what happens in camp in the run-up to a fight and how they affect a fighter both mentally and physically.

Elsewhere, aerial images have been released showcasing the stunning 15,000-seat Diriyah Arena that will host the weekend's showdown.

Construction on the arena kicked off on the October 7 and used almost 300 tons of steel to cover an area of 10,000 sqm at the centre of historic UNESCO heritage site, Diriyah, the birthplace of the first kings of Saudi Arabia. It took 175 working dedicated staff to finish the works in time for what is considered the biggest fight in the past fifty years.

Anthony Joshua said: “It’s going to be an incredible night and I’m thrilled so many of my fans are going to be there, particularly from the UK.

"It’ll definitely be a night people will tell their grandchildren they were at, one of those iconic evenings of boxing.  Everyone from Saudi has been brilliant to work with."

The Sportsman has just landed in Saudi Arabia and will be reporting live, bringing you exclusive content from Riyadh. You can subscribe to our YouTube channel here.

The Sportsman
@TheSportsman
.@anthonyfjoshua: â€œIt's going to be an incredible night and I'm thrilled so many of my fans are going to be there"
The stage is set in Diriyah for #RuizJoshua2... 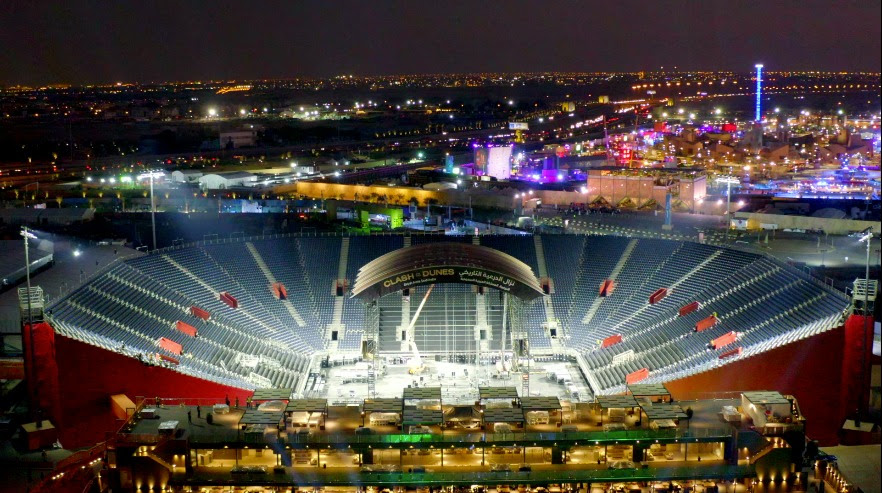 1
11
x
Suggested Searches:
Tyson Fury
Manchester United
Marcus Rashford
Lewis Hamilton
F1
Air Jordan
More
boxing
Everything You Need To Know About Game Of Thrones’ The Mountain’s...
In preparation for ‘the world’s heaviest ever boxing match’ between himself and fellow [ ... ]
boxing
Tyson Fury And AJ Set For $100m Each, Five Boxing Stories You...
There’s been more news on Tyson Fury and Anthony Joshua’s titanic heavyweight showdown, [ ... ]
boxing
Logan Paul, Mayweather And McGregor Are About To Make Boxing...
As we take our first tentative steps into the New Year, there’s a lot to be hopeful for in the [ ... ]
boxing
Ryan Garcia Vs Gervonta Davis Heats Up, Five Boxing Stories...
We’re only a week into the new year but already the world of boxing has served up some interesting [ ... ]
boxing
We Get It DAZN, Ryan Garcia Is Good But He’s No Sugar Ray Leonard...Yet
Ryan Garcia will never forget Luke Campbell’s name. The self-proclaimed future of boxing was knocked [ ... ]
boxing
From Gervonta Davis To Daniel Dubois, Five Boxers To Watch Out...
The next 12 months are going to be huge in the world of boxing. Not only are we on the verge of a number [ ... ]
boxing
He’s The Favourite But Garcia Will Need To Go Through Hell To...
Ryan Garcia is widely considered one of the most exciting talents in the whole of boxing right now, [ ... ]
boxing
De La Hoya Ups Ante On Ring Return, Five Boxing Stories You...
The festive period certainly hasn’t slowed things down in the world of boxing with talk of legendary [ ... ]
boxing
Anthony Joshua, Tyson Fury And Five Blockbuster Boxing Matches...
2020 might not have set the world alight when it came to boxing (although there were certainly high [ ... ]
boxing
Lopez Vs Lomachenko, Fury Vs Wilder II, It’s The Blockbuster...
It’s been a strange old year for boxing, with fewer events than ever thanks to the onslaught of [ ... ]
boxing
When ‘The Takeover’ Took Over, Why Teofimo Lopez Is Our Fighter...
In a year where boxing was curtailed by the onset of coronavirus and one where opportunities to shine [ ... ]
boxing
Callum Smith Ready To Show The World He’s Part Of Boxing’s Current...
When the man you’re facing is considered to be one of the best and most popular fighters of a [ ... ]
boxing
De Le Hoya Says Golovkin Would Be “Easy,” Five Boxing Stories...
Oscar De La Hoya is talking about his rumoured ring return, Dillian Whyte could face another top heavyweight [ ... ]
boxing
Klitschko, Mayweather And Ali Among International Boxing Hall...
The inductees to the 2021 International Boxing Hall of Fame have been announced this week and, boy, [ ... ]
boxing
60 Years Of Prizefighting Captured By The Ali Of Boxing Photography...
From a five dollar seat watching Ingemar Johansson stun the world by stopping Floyd Patterson at the [ ... ]
boxing
Treat The Boxing Fan In Your Life To These Punch Perfect Christmas...
2020 had a lot of promise for boxing fans but unfortunately fell short of realising any of its potential [ ... ]
boxing
The Stage Is Set For Fury And Joshua’s Battle Of Britain, But...
A showdown between Anthony Joshua and Tyson Fury, the biggest fight to be made in the world right now, [ ... ]
boxing
Let’s Be Brutally Honest, Nobody Cares About Boxing Belts Anymore
Name the four belts Anthony Joshua currently holds. Too tough? Ok, name the one belt Tyson Fury won [ ... ]
boxing
Fury Calls Out ''Big Dosser'' Joshua, Five Boxing Stories You...
It’s fight week for Anthony Joshua as he aims to end 2020 on a high, Dana White slams the sport [ ... ]
boxing
From Maidana To Malignaggi, Amir Khan's Five Best Performances...
As a former unified light-welterweight world champion, an Olympic silver medallist and one of the [ ... ]
boxing
Snoop Dogg’s Here To Take Over, Five Boxing Stories You Might...
Snopp Dogg is aiming to change the boxing game forever, Tyson Fury doesn’t need a Sports Personality [ ... ]
boxing
Jake Paul’s Demolition Of Nate Robinson Sets Dangerous Precedent...
It was hard not to feel at least a smidgen of sympathy for Nate Robinson, the NBA journeyman whose first [ ... ]
boxing
From Mics To The Matrix, Five Facts You (Probably) Don’t Know...
The boxing world will be standing back and watching on in either excitement or bemusement this weekend [ ... ]
boxing
Five All-British Heavyweight Fights To Whet Your Appetite For...
We’re being delivered a real treat when British heavyweights Daniel Dubois, 15-0 (14), and Joe [ ... ]
boxing
Golovkin Targets Middleweight History, Five Boxing Stories You...
As ‘Iron’ Mike Tyson gets ready for his showdown with Roy Jones Jr this weekend he gives [ ... ]
boxing
Ahead Of Conor Benn’s Toughest Test, Let’s Leave Comparisons...
His father was ‘the Dark Destroyer’ a man who swept through the super-middleweight division [ ... ]
boxing
Deontay Wilder's Heavyweight Wishlist, Five Boxing Stories You...
Deontay Wilder is on the hunt for a new opponent, DAZN could bring some much needed festive cheer to [ ... ]
boxing
Tyson Fury Helps You Transform your Mind, Body & Goals With...
He is the most famous - and quite possibly the best - boxer on the planet. The undefeated lineal heavyweight [ ... ]
boxing
Dame Helen Mirren Blasts Boxing Robbery, Five Boxing Stories...
Hollywood royalty rages over results, Bob Arum has some home truths for Terence Crawford and Tyson Fury’s [ ... ]
boxing
Terence Crawford Is Special But Next Year's Plans Can Wait Until...
"I go into the ring knowing that, on any given day, any fighter can lose. I don't carry myself [ ... ]