It is being reported that Anthony Joshua could be on the verge of accepting a ‘step aside’ payday to forgo his unified heavyweight title rematch with Oleksandr Usyk. The apparent plan is to stage a clash between WBO, IBF and WBA champion Usyk and WBC, The Ring and lineal king Tyson Fury to crown an undisputed heavyweight ruler. A figure of £15 million is being mooted for Joshua to allow the bout to take place, with the added bonus of a guaranteed shot at the winner. Despite the clear business sense of such a decision, not just financially but in clearing the way to fight for the undisputed belt rather than the current fractured championship, Joshua is being criticised. This is part and parcel of a career in which ‘AJ’ has been consistently maligned and underrated.

Recency bias can perhaps be used as a reason why Joshua’s career appears to be so undervalued. Certainly, when the Olympic gold medalist appeared third on our ranking of the Top 10 British Heavyweights of the Modern Era, many readers had a problem with the choice. There were arguments that Frank Bruno and Henry Cooper should both be above him. Not to disparage those two legendary names, but the reasons ‘AJ’ superseded them are clear. Cooper was a beloved warrior, but his career zenith was knocking a young Cassius Clay down en route to a stoppage loss on cuts. Bruno reigned once, briefly, as WBC heavyweight champion. Joshua has unified three of the four major belts, defending those titles seven times across two reigns. The power puncher also stands tenth in the all-time list for knockouts-to-wins ratio in heavyweight title fights, one place above a certain Mike Tyson.

That would be the “will he or won’t he?” situation surrounding his potential rematch with Oleksandr Usyk, the man who took his belts at Tottenham Hotspur Stadium in September, has not helped matters. Joshua originally triggered the rematch clause in his fight contract, with a spring 2022 meeting between the pair mooted. However, it has emerged that Joshua is being offered money to step aside and allow an undisputed title unification between Fury and Usyk take place.

The former champion had previously hinted he was expecting such an offer in an interview with IFL TV, saying "That step aside thing, it may not go with what I stand for in terms of bringing me respect, fighting the best, but it may make sense for business". Joshua’s promoter, Eddie Hearn, went even further at the time, saying that an offer of £40 million and a mandatory shot at the winner would do the trick. The price appears to have dropped dramatically, but the guaranteed shot at the new undisputed champion is thought to still be at the centre of any deal. 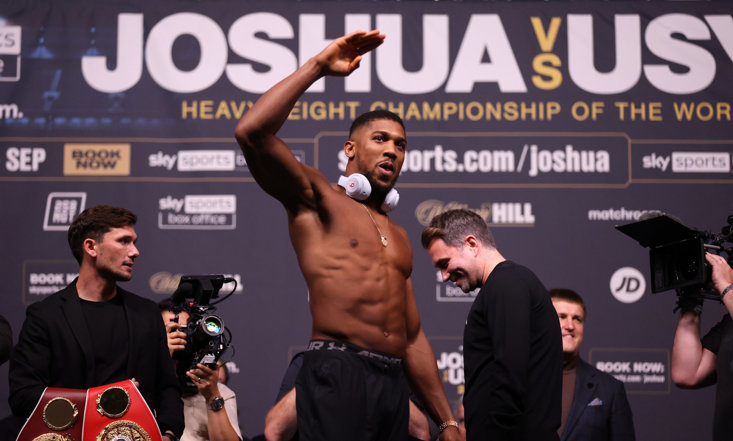 If he was to step aside, he would arguably be doing boxing a favour, by letting an undisputed champion be crowned as soon as is humanly possible. However, rather than being lauded as a selfless step to aid unification, Joshua is being accused of possibly “bottling” a Usyk clash. There are many things levelled at Joshua, but the idea of him ever taking the easy road is the most egregious. Here is someone who won a world heavyweight belt in just 16 bouts, the fourth quickest in history in terms of both fights and time. He’s also 12th in the all-time list of most victories in heavyweight title fights. All this at just 32, with so much of his career ahead of him. Whether you have warmed to ‘AJ’ or not, he is already a historic figure in heavyweight folklore.

If you’re Joshua, you are probably tempted to take the step aside money as you know refusing would do little to change the unfair treatment your career is subjected to. He’ll never be afforded the national treasure status enjoyed by Fury, or the lovable underdog tag the likes of Bruno and Cooper enjoyed. Joshua is simply a very good heavyweight boxer, both as an amateur and a professional. If that isn’t enough for people, then the two-time former heavyweight king would do well to think only of himself from now on.