Boxing
News
The two heavyweights came face-to-face at a press conference ahead of this weekend's showdown in London
Kieran Spratt
15:33, 23 Sep 2021

Anyone expecting fireworks akin to Canelo and Caleb Plant’s presser might have been left disappointed as Anthony Joshua and Oleksandr Usyk took part in a much more subdued conference on Thursday afternoon, as the duo get ready for the weekend’s mammoth heavyweight tussle at the Tottenham Hotspur Stadium. In fact, Usyk’s garish red suit might have been the wildest thing about it!

Two-time heavyweight champion Joshua, who puts his IBO, WBO, WBA and IBF belts on the line in north London on Saturday night, was clearly ‘in the zone’ as he spoke to the press and while he is excited to take on the Ukrainian, he is treating the bout as just another day in camp.

“This fight gives me the motivation to practice against a right-handed fighter. It's been demanding and challenging but we make it fun, because this practice, when you can see improvements, like a dog or baby him, and you praise them, they want to do more, so I wanted to give more and more each day, and I'm still in camp now for everyone here.

“I hope you enjoy fight week and the build up but for a fighter like myself, this is just another day in camp. And on Monday, maybe Tuesday I'll be back in the gym. So, I'm just looking forward to performing for you guys who have come out to see what I do every day in the gym. I do this a lot - I practice, I spar a lot, I hit the heavy bag - so you guys are coming out to see me hit a live body bag, and you're coming out to see me kind of spar one guy instead of sparring like four or five guys.”

“I'm just gonna be in the ring with one guy for a duration of 45 minutes, and I hope you guys really enjoy everything I've been working on Saturday night.” 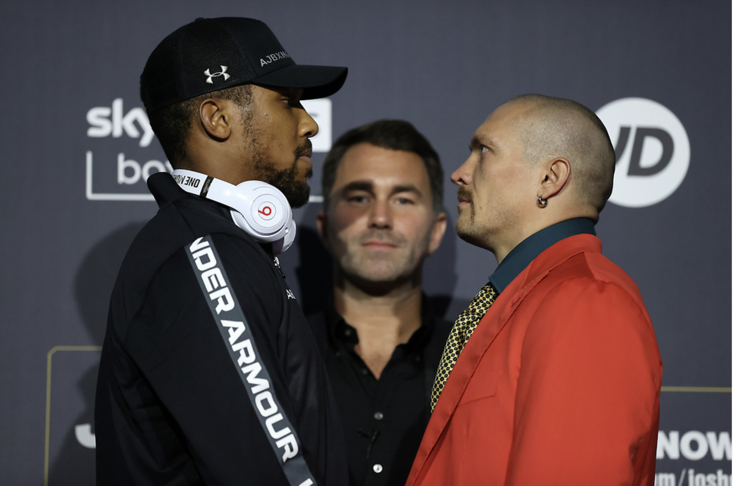 Former undisputed cruiserweight champion Usyk represents one of the toughest tests of Joshua’s career, although the 31-year-old doesn’t seem to be fazed by his fellow London 2012 Olympic gold medallist.

“I don’t really fight good fighters because I want people to respect me or anything like that,” he added. “If you told me to fight King Kong, I’ll give it a go. This an opportunity for me to go to work, this is my job, he’s going to work.

“I’m not an easy fight for anyone. I like fighting. God has blessed me. He showed me the path to get into boxing and it has to be a reason why I’m here.

“I’m here, I’m blessed, I don’t take it for granted and I appreciate everyone coming out.”

Undefeated Usyk, who was last in action in October, beating Dereck Chisora on the scorecards at Wembley Arena, says he’s feeling good ahead of the showdown and is looking forward to making history.

“Every fight makes history and I think me and Anthony are going to make another step in history. Something that people later will be talking about, people will remember, people will be watching it on TV, and it will make history.”