Sami Hyypia saw the positives of losing the Liverpool armband to Steven Gerrard in 2003.

Tyrone Mings said much the same publicly a fortnight ago when Gerrard took a similar step at Aston Villa to the one Gerard Houllier made at Anfield 19 years ago. Mings had been deposed after one season as skipper, with John McGinn handed the Villa captaincy.

“For me this isn’t about John or I,” Mings said on Twitter. “It’s about what’s right for Aston Villa. I have no issues with the manager’s decision; I’ve loved leading this team. Anyone who knows John McGinn knows how infectious he is and it will be an honour to play underneath his captaincy.”

The problem for Mings on Saturday at Bournemouth was that he didn’t get to play under McGinn’s captaincy, with Ezri Konsa and new signing Diego Carlos being favoured in the heart of defence as Villa went down 2-0 to Mings’ old club from two set-piece goals. The knee-jerk reaction was to wonder whether Gerrard had gone too far in demoting his former skipper completely.

But there can’t be much argument that Mings deserves a place in the long term over Diego Carlos, a consistent part of a Sevilla side who have competed at the top end of La Liga over the last three years and won yet another Europa League title during the Brazilian’s stint with the club. He not only has aerial ability and strength to at least match those of Mings, he also has decent quality on the ball. His arrival for around £26 million was a signal of intent, and he was never going to be left to sit on the bench for long.

So the fascination with second-guessing Gerrard this week is interesting. Whereas Bruno Lage’s decision to allow Conor Coady to leave Wolverhampton Wanderers for Everton leaves his side without its beating heart, the same is not true at Villa. Mings is no Jack Grealish. He is a functional, courageous centre-back who can do a job in the Premier League but someone Villa need to improve upon if they are to make progress after last season’s 14th place finish. 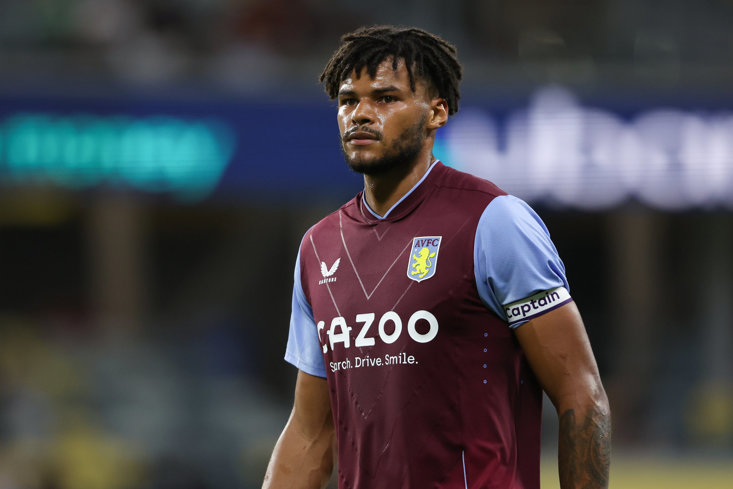 MINGS HAS A JOB ON TO WIN HIS PLACE BACK

“I inherited Tyrone as the captain when I took this job in November and I always wanted to name a full-time captain,” Gerrard said last week in explaining his decision. “I wanted that to be my captain and my decision, and I analysed the group really closely on and off the pitch.

“I’m really happy and content with my decision to go with John McGinn, I think he’s universally respected, he’s been at the club for a long time and the fans adore him. Everyone around Villa Park has got respect for John, and the players have. He plays with consistency, he’s my type of player, and they are a few reasons why I’ve decided to go with John.”

In giving McGinn the honour and responsibility of the leadership, Gerrard is thinking of Aston Villa’s future. McGinn is clearly an inspirational presence in the dressing room, has two years on Mings and is far more likely to be a fixture in the starting XI for the coming seasons. Having Mings hanging around in the background as a rarely-used and disgruntled presence is a concern, but it would only have made matters worse if he retained a position of authority such as the captaincy.

Now it is up to Mings to do at Villa what Hyypia did at Liverpool and become a better player as a result of this episode. “When I made the decision over the captaincy, I set him that challenge,” Gerrard added to BBC WM after the loss to Bournemouth. “We said to Tyrone ‘If you get back to your consistent best you’ll get back in the team.

“He also missed some training time with an injury and there’s a niggle in the background as well. When Tyrone is back at his best and looks me in the eye and shows that he’s ready to play, he’ll get opportunities.” And that is all any player can ask of their manager. If you show you’re ready, you’ll get chances to shine.

He might not be captain anymore, but who really saw Tyrone Mings as Villa’s long-term leader? John McGinn deserves the role of captain more than he does, and Diego Carlos deserves the chance at centre-back more than he does. Steven Gerrard has done what any manager with ambition would have done and it’s up to Mings to use the last fortnight as motivation to become a better version of himself.