Lee Carsley has quietly gone about improving England’s U21 side. After the Aidy Boothroyd era that saw talent wasted and major silverware evaded, it feels as though the new boss has got his side pulling in the right direction.

The young Lions have secured their qualification for next summer's European Under-21 Championship in Romania and Georgia, with eight wins out of ten in their qualification group. It was an impressive campaign for Carsley who was not seen as the most inspiring appointment when he was given the job in July 2021.

However, he has settled his side into a 3-4-3 formation that Gareth Southgate also likes to employ with the first team and as a result, thoughts have turned to the next group of players ready to make the step up. With the World Cup just 52 days away, it would be a shock of Theo Walcott 2006 levels for any of the current crop to seal a place on the plane to Qatar, but it isn’t beyond the realms of possibility.

There’s certainly a hell of a lot of talent waiting in the wings as we look forward to Euro 2024. England’s main issue looking ahead to the winter World Cup is obviously in defence. The Harry Maguire issue has been discussed to death, but even John Stones, Eric Dier, Fikayo Tomori and Marc Guehi are not elite level defenders. Not yet anyway.

Currently battening down the hatches for the U21s are Man City’s Burnley loanee Taylor Harwood-Bellis, Leeds defender Charlie Cresswell and Levi Colwill. The Chelsea man is on loan at Brighton and needs to force his way into Roberto de Zerbi’s plans if he is to realise his potential.

He potentially has the highest potential of the lot but all three are at the right place to develop. Harwood-Bellis and Cresswell are getting gametime in the Championship at Burnley and Millwall respectively, and their pathway to Premier League football could look a lot clearer come May.

Djed Spence is currently adding to England’s lengthy list of quality right-backs, but it is on the opposite flank where we find our most likely contender to break into England’s World Cup squad. If either Luke Shaw fails to get back into Manchester United’s first team and Ben Chilwell is either injured or fails to get into Graham Potter’s plans, there is a gap for a left-footed wing-back.

England
@England
Here's how our #YoungLions line up for today's game against Italy!
Watch LIVE from 4.30pm on our official YouTube channel: 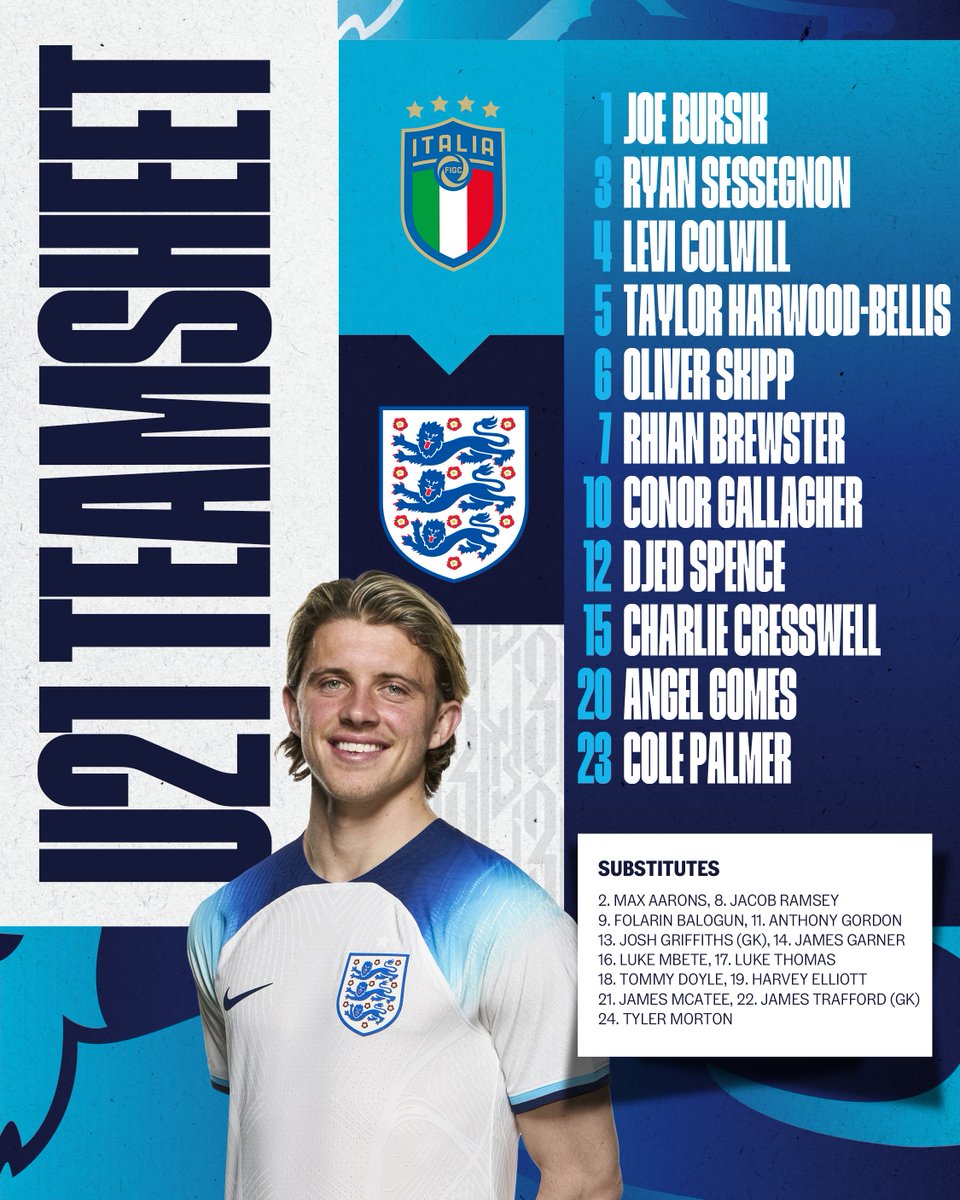 Leicester City’s Luke Thomas has previously found a lot of gametime in a back four, but Tottenham Hotspur’s Ryan Sessegnon is surely now ahead of him in the pecking order. Ivan Perisic may be Antonio Conte’s favourite at club level but the Englishman has exceeded expectations and provides real competition on that flank.

For Southgate, he may be the emergency back up he relies upon should Shaw and Chilwell fail to deliver over the next two months. He will in all likelihood pick his two senior left-backs, but Sessegnon could deliver for him in the future and at 22, he has plenty of time ahead of him.

Conor Gallagher already has four senior caps to his name and is close to the first-team squad, if he can get more gametime in the Premier League, while Harvey Elliott has made giant leaps in Liverpool’s first team this season. Morgan Gibbs-White needs to work hard after his big money move while of the forwards, Anthony Gordon is the closest to sneaking in if he can continue his impressive form for Everton.

But the squad is almost settled. Only injuries or some incredible form will change Southgate’s thinking at this late stage. Sessegnon is the frontrunner to make the leap, but Gallagher and Gordon will look to take advantage of any surprise opportunities.