As Brighton & Hove Albion’s equaliser against Chelsea hit the back of the net on Tuesday night, it’s fair to say it was expected. Not only because Graham Potter’s side did the exact same thing just weeks ago, but because the Blues are in a surprising rough patch, something which Thomas Tuchel has experienced before.

His Chelsea side have won just once in their last seven Premier League fixtures and in what was expected to be a very tight title race this year, reigning champions Manchester City have run away with it. Again. Tuchel’s side are now 12 points behind the league leaders, and effectively their title charge has come to a halt. With most of the teams around them having games in hand, the recent results may come back to haunt his side at the end of the season.

The Blues have been blighted by injuries, the same as Leeds United, but still Marcelo Bielsa has been able to adapt and carry on, whereas Tuchel has just seemed to find excuses constantly. He cannot quite seem to grasp that he has multi-million-pound players on his bench, not just his starting lineup. And not to mention he has one of the world’s greatest academies to dip into if an area needs covering. He has the tools to help him through his troublesome period, but he just doesn’t seem to want to adapt his tactics for an immediate upturn in results.

Perhaps the squad is still shaken up by Romelu Lukaku’s tell-all interview with Sky Italy, or maybe just suffering from fatigue as the German coach suggested last night. Regardless, Chelsea have too much quality within their ranks to be faltering as much as they are presently, and Tuchel needs to take some accountability. £97million was spent on Lukaku in the summer, and not only is he struggling in front of goal, the side are not playing to his strengths, which right now would suggest why they are in a bit of a slump – and why he was so unhappy and decided to do that controversial interview. There is even an argument that the magic that Tuchel’s system had in the early parts of the season has worn off. Their opponents may have figured out how to manage them and if that is the case, he may need to concede his current setup, at least until the integral players for that system have returned to match action. But this could be identical to the dip in form that saw him sacked from Paris Saint-Germain just over a year ago. 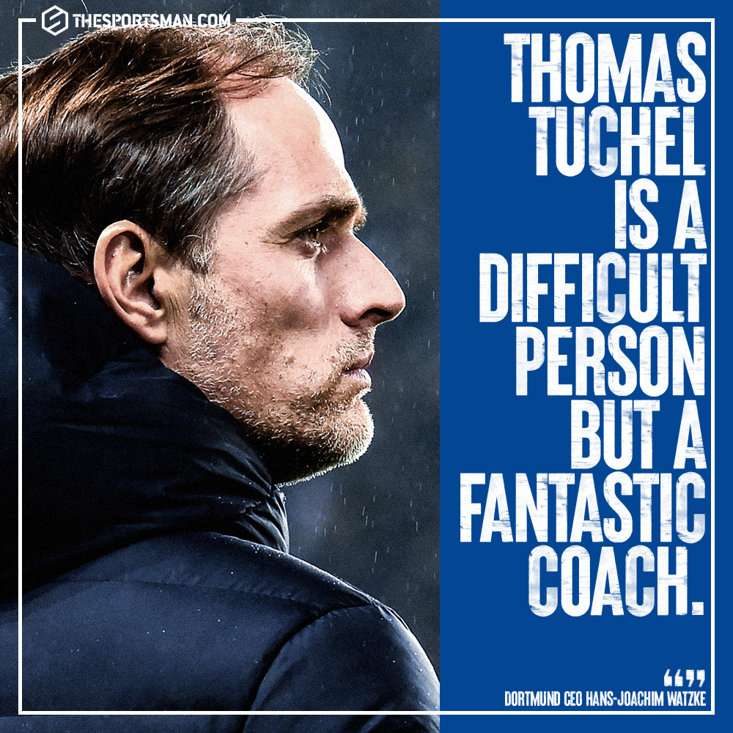 Weeks before he moved to Stamford Bridge, Tuchel was given the boot by PSG as they sat third in Ligue 1, even though they were just a point behind then-leaders Lyon. But with four losses in 17 league games, the club hierarchy decided to part ways with the manager that guided them to their first Champions League final just four months before that. The correlation is quite spooky, not only has he suffered a slump over the winter period, he guided Chelsea to a Champions League final last season in which the Blues triumphed. He was a divisive figure in Paris, and too at Borussia Dortmund after falling out with the German board over transfer plans back in 2017. It seems to be the trend that Tuchel comes in, has an instant impact but slowly it fades and then it eventually leads to an unceremonious break-up.

As Dortmund CEO Hans-Joachim Watzke described him on a podcast on German public radio last November: “Thomas is a difficult person, but a fantastic coach.”

The former PSG boss has been stubborn in the past, but he has changed to an unfamiliar back four due to injuries, which could partly explain why their results have deteriorated. However, the players do not appear to be playing with as much intensity as they were earlier in the season and that could be down to tiredness, key players missing, or they have lost faith in the current system because of recent results. If a victory does not come soon for the Blues, Tuchel may have to turn to Plan C or D, to attempt to get the best out of the players available.

With him being just under a year into the job in west London, even by Roman Abramovich’s standards, it would be surprising to see the German given his P45 after this first real hiccup since he took over. But when you factor in the Lukaku interview, in which he stated his unhappiness as the club’s most expensive asset, and the poor results, the board and owner Abramovich - who of course has a preceding reputation when it comes to firing managers - may be starting to get a little twitchy. If Chelsea are to follow the Tuchel trend, then a break-up looks to be inevitable, but it’s unknown how deep into the project the fallout will emerge.