You’re a neutral. You’re a fan of women’s football and revelled in the success of the Lionesses at Euro 2022. The growth of the sport needs a compelling story in 2022-23 to draw further positive attention. Who do you want to win the neck-and-neck Women’s Super League title race which has developed between four of the world’s biggest clubs?

Chelsea have won the last three titles and five of the last six. Surely that’s enough. You want a different name at the top of the game, right? Variety is the spice of life, and all that. How much can you talk up a league which keeps being won by the same team over and over again? What is this, Ligue 1? The Bundesliga?

The other challengers are Arsenal – three-time champions and the last team to stop Chelsea taking the title, Manchester City – 2016 winners and the dominant force in the men’s game, and Manchester United – formed as a full-time outfit for the first time in 2018 but still no minnows in terms of size. None of them are.

Still, if you follow the logic of wanting a storyline to promote the women’s game, you’d pick one of those three over Chelsea, right? A power shift is a story, a suspenseful narrative.

But at Chelsea there is Emma Hayes, and at Arsenal, Manchester City and Manchester United there are Jonas Eidevall, Gareth Taylor and Marc Skinner respectively. The Blues, in fact, are one of just four clubs in the WSL to have a woman managing their first team. While it is not a prerequisite for any club to have a female in charge, does it actually serve the greater interests of the league to see Hayes, rather than one of her male contemporaries, lifting the trophy come the season’s end?

Chelsea take on Liverpool – Matt Beard’s Liverpool – on Sunday at Kingsmeadow with their advantage at the top lessened after last weekend’s 1-1 draw at Arsenal in front of nearly 47,000 people. But those in attendance at the Emirates didn’t seem to care who was stood on the sidelines. 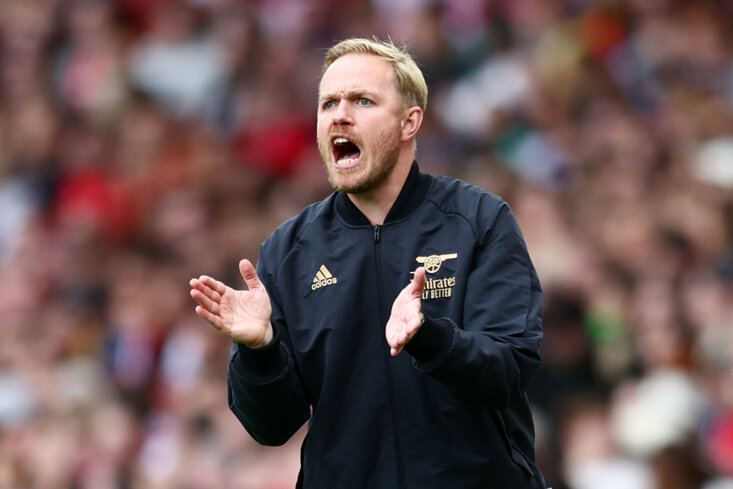 EIDEVALL'S ARSENAL ARE RIGHT IN THE RUNNING

After years of neglect, women in football are finally getting their dues. In an ideal world, female coaches would be getting their chances ahead of male counterparts too. Sarina Weigman succeeded with England last summer where Phil Neville and Mark Sampson had failed, after all.

But maybe it is in this generation of professional female footballers – the first of their kind – that the answer lies. The likes of Vivianne Miedema and Guro Reiten could be the Pep Guardiola and Jurgen Klopp of the future. Why shouldn’t Leah Williamson or Keira Walsh become the female answer to Gareth Southgate or Eddie Howe?

For now, the lack of women in managerial jobs is a point of contention but in no way a deal-breaker. It is something that needs addressing, but not at the loss of great advocates for girls and women in sport, even if those advocates are male. The WSL will be won or lost on the actions of the phenomenal athletes out on the field, and they have never been better than they are now. That’s the bottom line, whatever the coaching needs of the sport going forward.