Football
News
The English champions have made a habit of blowing great positions in the Champions League
Conor Keane
13:30, 05 May 2022

It happened again. Manchester City and Pep Guardiola have fallen short in the Champions League in yet another collapse. Their latest capitulation against Real Madrid at the Bernabeu was shocking but not uncommon for either the Catalan or his City side.

After losing last year’s final against Premier League rivals Chelsea amid conjecture over Guardiola’s team selection, the pressure was on to get it right this time around. There is no denying that for the majority of the 90 minutes the visitors were in cruise control, but as the Champions League shows us time and again, anything can happen on this frantic and wonderful stage.

It was yet another night to forget in Europe for the Premier League champions and we will constantly wonder how they managed to lose after having suffered no scares until Rodrygo scored Los Blancos’ first at the death. They were comfortable, too comfortable as it proved. Considering how flat Real Madrid were in normal time, City are left to rue not making the most out of their chances. But that wasn’t all they got wrong…

This has been talked about significantly in football over the last few years and it clearly plays a huge part in the biggest games of the season. City being on the end of comebacks is no surprise, since it has been a running theme for Guardiola during his entire career as a manager in the Champions League. Wednesday night’s drama just further highlighted that he hasn’t evolved enough as a coach to be able to get his players to see games out when it is needed. As cited by journalist Miguel Delaney, in the 51-year-old’s 11 Champions League eliminations, eight of their defeats have involved decisive periods in a game including a flurry of goals conceded. Is it really a club problem if it has happened at every club he has managed, with Barcelona, Bayern Munich and now Manchester City?

These capitulations have been suffered five times in seven Champions League campaigns by Guardiola at City. Neither he nor his players have been able to learn from past mistakes in order to overcome their recurring European nightmare, and it is now reached the point where you are always expecting the next City slip-up to happen in one way or another.

For 90 minutes, Guardiola’s men were comfortable. Captain Ruben Dias and defensive partner Aymeric Laporte nullified any threat from Karim Benzema, who had a quieter game than we were expecting following his incredibly run of form in 2022. And yet he went on to score the goal that sent his team to Paris.

As has been the case with City on many occasions, they do not need to be attacked constantly for them to be considered vulnerable. An opponent just needs a couple minutes to break their passing chain and get into a dangerous position in and around the final third to be able to allow the nerves to creep in among the City players.

In the Premier League a few weeks ago against Liverpool, City were leading twice against their title challengers and were largely the better side on the pitch. But any time Liverpool attacked or managed to find a dangerous position, the Cityzens always looked like they were going to concede. So when Rodrygo’s first went in in the 90th minute on Wednesday with six minutes added to the clock, you just knew the hosts could easily score again. It once again brings in the psychological aspect regarding Guardiola and his players, but in a game in which they are barely threatened they suddenly found themselves on the back foot and panicked, losing all sense of organisation and discipline. So it was always a case of when, not if, Real Madrid would get the second to take the tie to extra time. 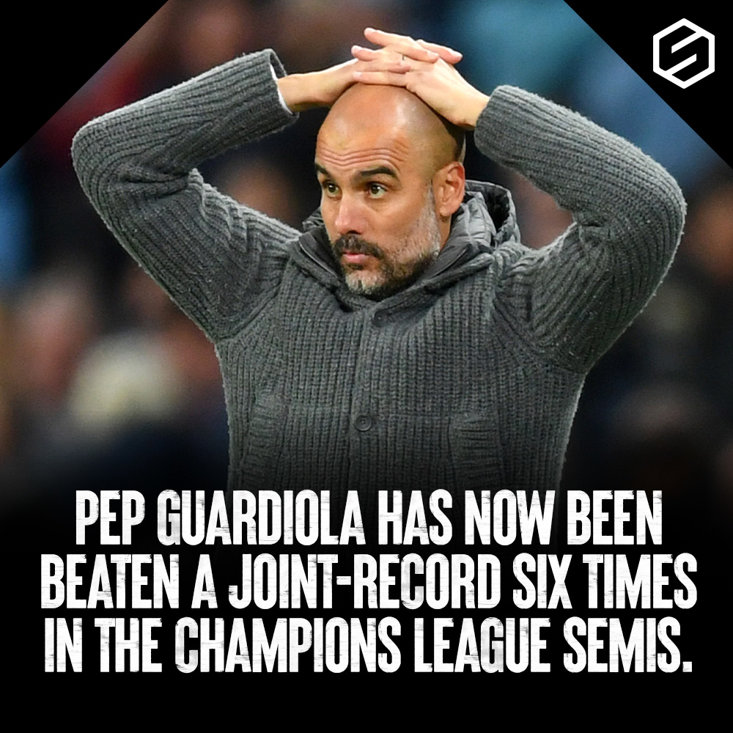 Every year it always seems to come back to Guardiola’s stubbornness, whether it be tactics, substitutions or general game management. This time there appeared to be over-confidence too. When Riyad Mahrez fired in the opener to take the aggregate score to 5-3, the touchline celebrations were as though it had been scored in the 90th minute and it was the goal that had taken them to a second successive final.

Following that goal there appeared no urgency to kill the tie. Although Kevin De Bruyne had a quiet game, it was brave of Guardiola to bring off his best midfielder, a player who has the ability to create something out of nothing. As a result, his side were left lacking in extra time. His replacement, Ilkay Gundogan, did have a positive impact when he came on, while fellow substitute Jack Grealish had two great opportunities to score in quick succession. But there was a lot of the same old approach from Pep.

Guardiola’s style of football provides inspiration to many clubs around the world, but he can still take show signs of fragility in his in apparent inability to show a more pragmatic side when a situation necessitates it. At the Bernabeu he continued to encourage his side to play their way when what they really could have done with to see them over the line was to take a leaf out of Atletico Madrid’s book.

Diego Simeone is regarded as the mastermind of seeing games out when his side has a slender lead, and while it isn’t regarded as pretty, it’s that desire to kill a tie that Guardiola has continually overlooked season after season. While some would love Atleti to play some more attracting stuff, Pep could do with his men some of the less heralded stuff themselves sometimes. Had he ordered his side to shut up shop for the final minutes of normal time no one would have been able to claim they had been negative. They had a 5-3 lead gained with some swashbuckling attacking football, after all.

Many will say Guardiola’s two Champions League successes to date came from having that extraordinary Barcelona team at his disposal and maybe they’re right. There is no denying he has great players in his ranks at City, including De Bruyne and Mahrez, but he didn’t think twice about bringing them off long before the final whistle. The Spaniard would have never dared do that with Lionel Messi, Andres Iniesta or Xavi if Barcelona were in that position. They were players with an instinct for taking the sting out of an opposition and the ability to do so with the ball at their feet.

While he doesn’t quite have a trio of their majestic quality at City, Guardiola has more than enough resources in his squad to have held onto a two-goal lead on Wednesday. Instead, it happened again. Or, maybe, Guardiola happened again. That’s six Champions League semi-final defeats for Pep, and no manager has suffered more at the last-four stage. How many more times will he fall short before contemplating a change of approach?