The Gunners continued their electric start to the season with a 5-0 shellacking of City at Meadow Park, with Vivianne Miedema turning home the opener after Beth Mead had pounced on an error from Alanna Kennedy. It was soon 2-0 as Kim Little showed superb feet to work some space before firing confidently past Karima Benameur.

Jonas Eidevall’s side made it 3-0 on the hour, with Katie McCabe getting in on the act as Arsenal countered a City corner, and were four up when Little converted from the spot after being fouled by Alex Greenwood.

The rout was complete in injury time as Leah Williamson, returning after becoming England captain for the first half during the international window, headed home. The latter stages also brought an Arsenal debut for USA international and former Manchester United star Tobin Heath, making it a memorable night all round for the Gunners.

Arsenal remain top on goal difference with a 100 per cent record, but Manchester United lost their flawless status in dramatic style as they suffered a 6-1 home defeat to champions Chelsea.

Fran Kirby and Pernille Harder both struck early to set the tone for Emma Hayes’ side, and a Sam Kerr effort shortly before the break seemed to have already put the game beyond doubt. 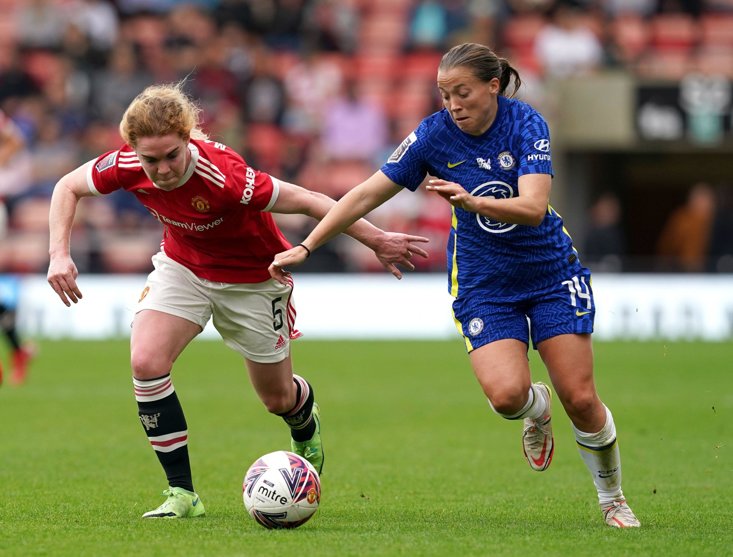 FRAN KIRBY ON THE CHARGE IN CHELSEA'S 6-1 WIN

Half-time substitute Alessia Russo briefly breathed life into the contest when she fired home from a narrow angle within three minutes of her introduction, but Kerr was soon celebrating a second after striking past Mary Earps at the second time of asking. Late goals from Drew Spence and Jessie Fleming completed the rout, with Chelsea leapfrogging United as a result of the comprehensive win.

In the weekend’s other games, Tottenham Hotspur’s impeccable start continued with a 1-0 win over Reading at The Hive thanks to Jessica Naz’s late strike. West Ham United were helped by two own-goals as they saw off Leicester City 4-0, with Tameka Yallop and Claudia Walker giving the Hammers an early buffer before the Foxes’ Ashleigh Plumptre and Kirstie Levell turned into their own net.

Aston Villa were 1-0 winners at Brighton & Hove Albion thanks to an Emily Gielnik effort just after half-time, and Everton saw off Birmingham City 3-1 off the back of Leonie Maier, Hanna Bennison and Rikke Sevecke goals, with Jade Pennock’s first-half equaliser counting for nought for the Blues.