Arsenal cruised into the Europa League semi-finals thanks to a phenomenal first-half performance, beating Slavia Prague 4-0 (5-2 agg) at the Sinobo Stadium on Thursday night.

The game was the biggest of the season for the Gunners and with them well off the pace in the Premier League, winning this tournament is their only realistic route to securing Champions League football next season. The late equaliser they conceded at the Emirates in the first leg was a hammerblow that left the tie hanging precariously in the balance but Arsenal were absolutely devastating tonight, and left little doubt there’s still fight left in them as we head towards the tail end of the season.

It was a dream, albeit slightly bonkers start for Mikel Arteta’s side, with the ball hitting the back of the Slavia Prague net four times in the first 25 minutes alone. First came Emile Smith Rowe, who reacted quickest to bury a Bukayo Saka effort which came off the post, but it was ruled offside by the tightest of margins by VAR.

Then came six minutes of madness, where the Gunners blitzed their Czech opponents. Smith Rowe was in the thick of it again, showing wonderful feet in a tight space on the edge of the area to play Pepe through on goal, who duly notched his fifth of the season in the tournament.

It was 2-0 three minutes later after another brilliant quick break down the right by Arsenal ended with Saka being upended in the box by Jakub Hromada and a penalty was given. Alexandre Lacazette made no mistake from the spot, sending Ondrej Kolar the wrong way.

Saka, who was absolutely superb tonight, added their third mere minutes later after yet another Arsenal break down the right. Latching on to a Calum Chambers pass, Saka drove forward towards the box, before cutting back and drilling a low shot into the net at the near post. Going into the break, Arteta’s men were in dreamland, while Slavia Prague were left utterly shell shocked. 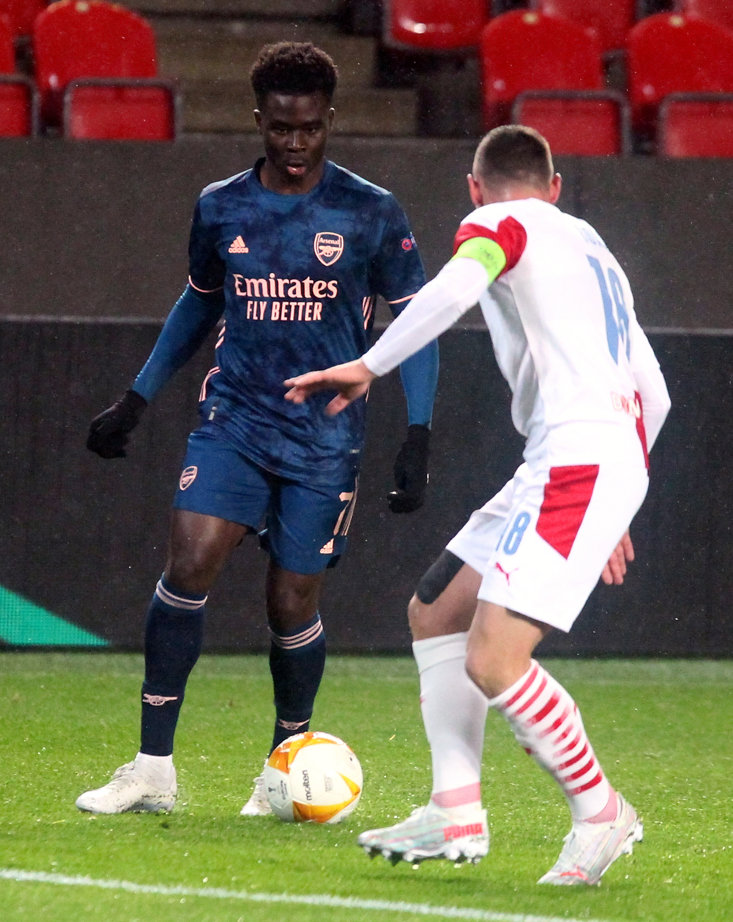 Though the game evened out more in the second-half, with few chances materialising for either side for large chunks, Arsenal extended their lead, putting the tie beyond doubt, when a lovely passage of play was finished by Lacazette who found the near post for his second of the game and the Frenchman’s eighteenth in total in the knockout stages of the Europa League.

It was an excellent performance across the pitch for Arsenal, in particular Saka, Smith Rowe and Lacazette, and they came through the biggest night of their season with flying colours. They will now meet their former manager Unai Emery, a three-time winner of the tournament, and his Villarreal side in the next round.

Speaking to BT Sport after the match, Sako said, “We were really strong and pretty much killed the game in the first half.

“I feel like we played well in the first leg but we just weren’t clinical. Credit to the coaching staff, the way we pressed, they just couldn’t get out.

“I think it showed everyone how good we can be. It is amazing to be involved in and I am sure it is amazing for the fans. We just need to cut out the mistakes and show the game management we did tonight.

Elsewhere, Manchester United were given little trouble in their second leg tie with Granada, beating them 2-0 (4-0 agg) courtesy of an Edinson Cavani strike and Jesus Vallejo own goal at Old Trafford. Ole Gunnar Solskjaer’s side will now face Roma in the semi-final.