Football
News
The Gunners dominated their north London rivals in a 3-1 showing at the Emirates Stadium
Conor Keane
14:29, 01 Oct 2022

Arsenal look strong. Following their 3-1 victory over rivals Tottenham Hotspur at the Emirates Stadium, we might have to start thinking that the Gunners are certainly in this year’s Premier League title race.

It was the 192nd edition of this historic and fierce contest and it certainly delivered in skill, drama and atmosphere. Mikel Arteta’s side were fluent, energetic and dangerous whenever they had the ball. Their attacking force of Gabriel Jesus, Bukayo Saka, Gabriel Martinelli, Martin Odegaard and Granit Xhaka are growing in confidence and this confidence is translating into their performances on the pitch.

The Gunners are firing on all cylinders right now and are becoming one of the best teams to watch in Europe right now and as each week passes, they start to look more and more like contenders for the 2022-23 Premier League title.

There was so much to like about Arsenal’s first and second goals. The stunning opener from Thomas Partey completed a slick passage of play involving 21 passes - the joint-most in the top-flight this term alongside Fabio Vieira’s goal for the Gunners against Brentford last time out. Then for Xhaka’s in the second half, the slick transition of possession from Martinelli to the Swiss midfielder was aesthetically pleasing and was rounded off by a well-executed low finish into the far corner. Jesus’ goal may have been scrappy but it showed just how alert that this group of players are.

Despite a dejected showing from Spurs,  Harry Kane just loves the North London derby. The Tottenham Hotspur striker has become the highest scorer in the historic contest between Spurs and Arsenal, surpassing Thierry Henry, with 18 goals in 14 matches across all competitions. His strike from the spot also saw him become the first player in the Premier League to register 100 goals away from home. 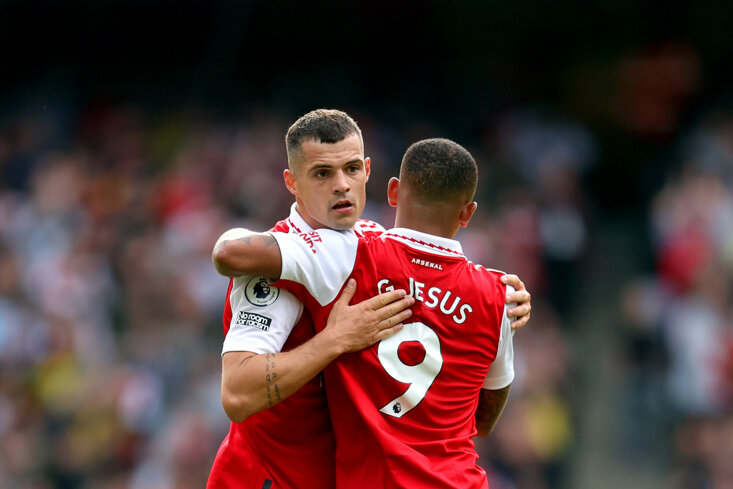 In terms of the game itself, it was a fast start from the hosts. Martinelli picked up the ball on the left side of the box to meet Bukayo Saka’s cross, but he cannonned his effort off the near post.

Spurs had the first clear-cut chance of the game as a well-taken set-piece found Richarlison inside the box but his stabbed effort was parried away by Aaron Ramsdale. The breakthrough came just before the 20-minute mark when Partey struck a wonderful shot from outside the box into the top-right corner.

Ivan Perisic had a great chance to level the scoring when Son Heung-min played him through down the left, but as he carried the ball into the box he sliced  his effort high and wide of the near post. Moments later, Spurs were level. Arsenal failed to clear their lines and Richarlison was brought down by Gabriel for a penalty, which Kane converted.

Shortly after the match restarted for the second half, Arsenal regained their lead as Jesus demonstrated his striker’s instinct to pounce on an error by Hugo Lloris. The Brazilian almost doubled his tally and the Gunners’ lead moments later but his headed effort drifted just wide.

Spurs pushed to respond for the second time in the match and Pierre-Emile Hojbjerg was presented with an opportunity similar to Partey’s opener, but his effort was not executed how he would have liked as it sailed over the bar. Things suddenly got worse for Antonio Conte’s side just after the hour mark when Emerson Royal was shown a straight red card for a reckless challenge on Martinelli - leaving Spurs a mountain to climb at the Emirates.

The game was then taken out of reach for the visitors when Xhaka fired low past Lloris after a neat link-up with Martinelli saw the midfielder pinch the ball away from the Brazilian to completely wrongfoot Spurs’ defence.

It was a commanding display from the hosts who were significantly better than their bitter rivals for the 90 minutes and deserved to retain their place at the top of the table and extending their lead to four points.