Football
News
Leeds were once again a shambles at the back, as Arsenal scored four
Simon Lillicrap
19:32, 18 Dec 2021

Ever started watching a film, got halfway through and realised you’d seen this exact one before? At Elland Road, what unfolded in the first was an almost exact carbon copy of their performance in midweek at the Etihad and only Arsenal’s wasteful finishing and lack of attacking intent prevented them scoring just as many as Manchester City had done.

Yet in the final 15 minutes, Elland Road roared and the crowd looked as if they may inspire a famous comeback, but Emile Smith Rowe came off the bench to secure a 4-1 win for Arsenal.  This was a Leeds side without a core of their starting XI, and with a bench made up of youngsters, including 15-year-old Archie Gray, and it seems Marcelo Bielsa’s famously small squad is hampering his team’s chances of picking up any points.

Meanwhile, Arsenal will spend Christmas Day in the top four after yet another impressive performance, albeit against depleted opposition. Still without Pierre Emerick-Aubameyang, a brace from Gabriel Martinelli and one apiece from Bukayo Saka and Emile Smith Rowe was enough to secure the three points that keeps them in pole position to finish in that final Champions League spot.

As they did in midweek, the Leeds fans stayed behind their team until the final whistle and they do deserve huge credit for the unwavering loyalty to this team and their manager, but this was another 90 minutes of struggle that did not move them away from the relegation zone.

From the start, the Leeds defence was disorganised and willing to present chances to the opposition. Captain Lacazette was played in one on one but was denied by Illan Meslier before Saka somehow poked wide when the Leeds goal was gaping. As a spirited Leeds side fed off the energy of a raucous crowd, Arsenal got a pivotal opening goal.

Adam Forshaw was caught out on the edge of his own box when under pressure from Lacazette and the ball fell to Martinelli who whipped the ball into the top corner. It was another risk from Leeds that cost them dear, after they had conceded seven in Manchester in midweek. 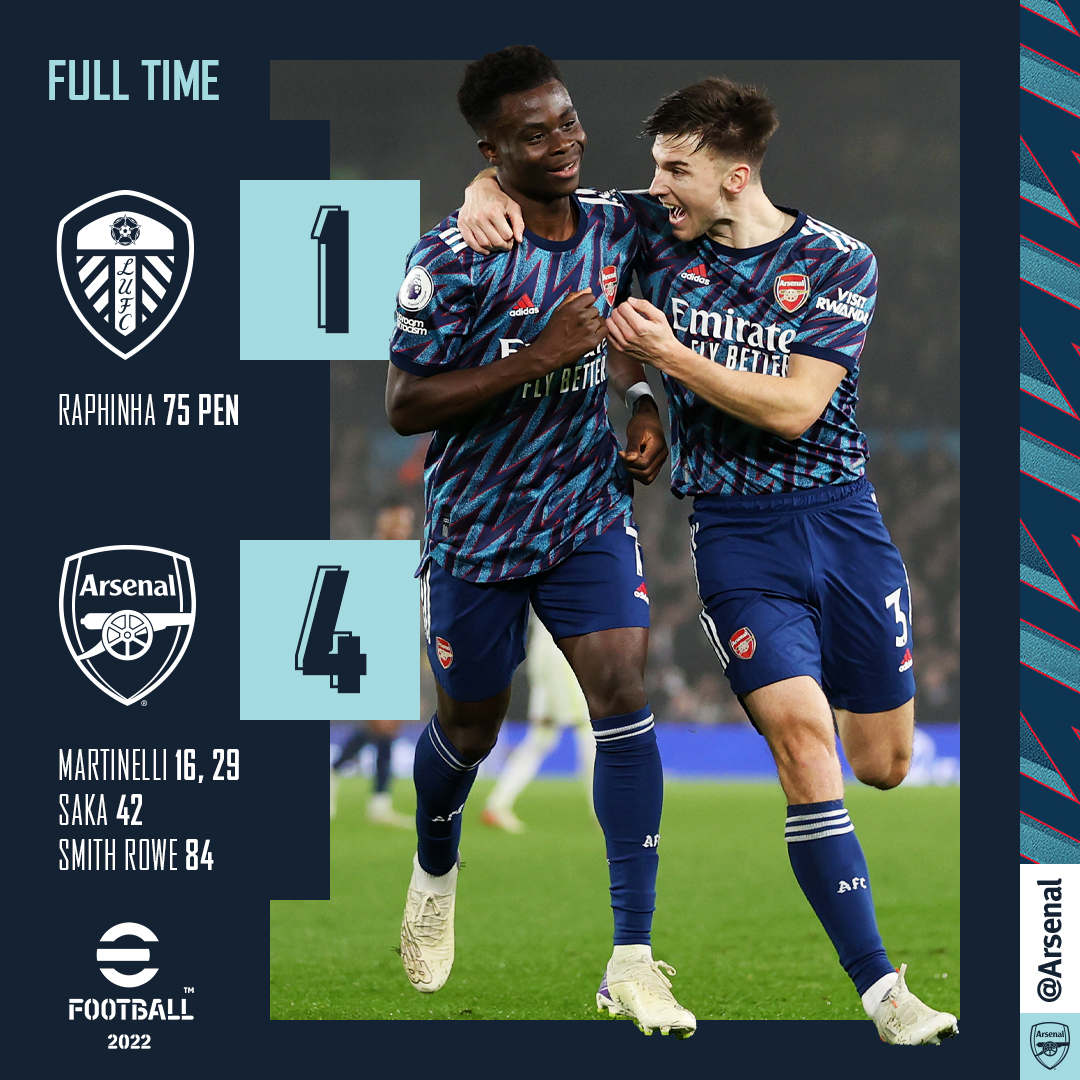 Granit Xhaka played a perfect ball through to the Brazilian youngster who was on the shoulder and he perfectly dinked the keeper and put Arsenal in full control of the match. The 20-year-old was loving life at Elland Road and Leeds simply couldn’t stop making mistakes in their own defensive third.

Talking of thirds, Arsenal’s came just before the break as Bukayo Saka broke the offside trap and Leeds failed to deal with his run into the box, before his deflected shot found the back of Meslier’s net. This Leeds crowd is so defiant, and follow Marcelo Bielsa religiously, but even with all their injuries this was getting out of hand.

The one negative from the first half came as Rob Holding on the Arsenal bench reported alleged racism from the Leeds fans towards the Arsenal dugout to the referee and the fourth official.

As Arsenal managed the second half well, and looked as if they were going to see the game out with relative ease - former Elland Road resident Benjamin White chopped down Joe Gelhardt in the box and Raphinha converted from the spot. However, any late hope of a comeback was swiftly dashed by substitute Emile Smith Rowe as he latched onto a Martin Odegaard pass to fire home the fourth.

Yet, the Leeds fans did not deviate. They kept on singing up to and after the final whistle, as the white scarves waved around this famous old stadium. Bielsa has the unwavering support of this city and under his tenureship things will improve as players return from injury. As for Arsenal, their young stars keep delivering wins.