Football
News
The Gunners progressed to the Europa League last 16 with a 4-3 aggregate win over Benfica
Elliott Bretland
19:54, 25 Feb 2021

Joe Willock, Reiss Nelson and Ainsley Maitland-Niles all started for Arsenal in the Europa League at Red Star Belgrade in October 2017. Young players hoping to make a good impression, they were all afforded an opportunity in Europe because the Gunners could afford to. Not now, however. Nowadays, Arsenal don’t just want to win the Europa League, they have to win it.

With the north Londoners languishing in 11th place in the Premier League table, eleven points off the top four, winning the Europa League is their only real chance to qualify for next season’s Champions League. Thursday’s night’s clash with Benfica in Athens was huge. Pierre-Emerick Aubameyang’s late header three minutes from time to win 3-2 on the night and send Arsenal through on aggregate was even bigger.

Arsenal boss Mikel Arteta knew full well the enormity of the tournament and how important winning the competition could be for the future of the club, admitting ahead of the clash, “Every time you are playing a competition you can go out, and you know the consequences. 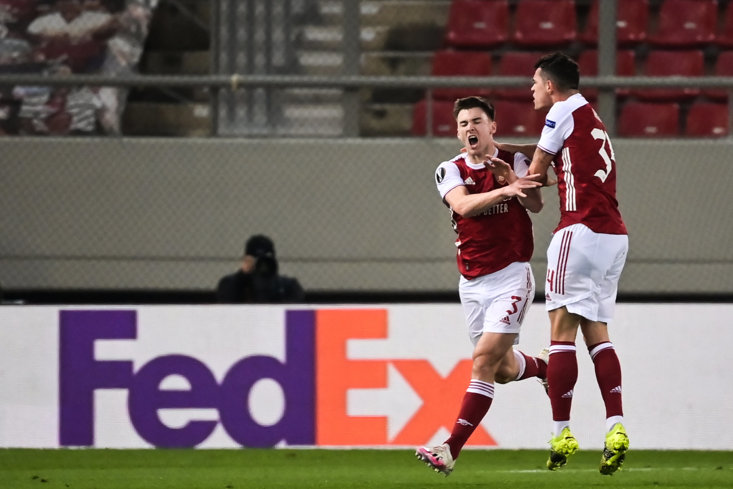 Arteta went strong, he had to if Arsenal were to progress. Aubameyang started and scored a sumptuous goal on twenty minutes after combining with Bukayo Saka beautifully. The England man played a perfect through ball and the attacker scooped the ball over goalkeeper Helton Leite with exquisite ease and composure. They would pair up again, later.

Lots has been angled at Arsenal for underperforming on the pitch in recent times but there was nothing they could do about Diogo Goncalves stunning free-kick two minutes before the break. Bernd Leno was left sprawling as the ball flew into the back of the net.

However, they should have done so much better for Benfica’s second. Dani Ceballos completely misjudged a long ball and in attempting to flick the ball back to his goalkeeper he merely played it onto Rafa Silva. The Portuguese midfielder latched onto it, nicked it round Leno and slotted home. With the away goals rule still applying despite the fact neither fixture took place in Lisbon or London, it was advantage Benfica.

They had half an hour to score twice and, so weary have Arsenal fans grown, they could be forgiven for fearing it was game over. In saying that, the Gunners have talent all over the pitch and Kieran Tierney showed his supreme ability to rifle home an equaliser with his wand of a left foot just six minutes after Benfica took the lead. This was Arsenal showing character and the battling qualities they have lacked during their malaise.

It was end-to-end as both sides looked to take control of their destiny before Arteta’s side finally took the lead. Saka again looked up and put in a brilliant ball for Aubameyang to head in at the far post. VAR was checked; goal given. Arsenal celebrations were loud and full of relief. Their sighs were even greater when Benfica struck the post deep in added time.

Speaking after the game, Arteta said, “I’m especially happy for Dani because he is a player who lives this profession like the most important thing in his life, and when he made that mistake if that would have cost the team and gone out of the competition that would have been mentally really tough.

“That is when you need the players in the team like the ones we have with Auba, Bukayo [Saka] creating the situations, Kieran scoring the goal to save him and out of a difficult situation we created a really nice moment.”

Arteta may enjoy the pressure of winning and will have loved the final outcome of his side’s display in Greece, but fixing a club struggling even before legendary boss Arsene Wenger left the Emirates Stadium, that’s a whole different pressure altogether.

However, they are on a good track in Europe. While they may stutter domestically, knockout football in the continent could suit them. Arsenal will get better from here and one day you’d expect they’ll get back to the top. Winning the Europa League as a route back to the Champions League would be massive. It’s still on.