Arsenal have regained their place in the Premier League top four after beating West Ham 2-1 at the London Stadium.

Mikel Arteta’s side had been temporarily kicked out of the Champions League places following Tottenham Hotspur’s 3-1 win over Leicester City at White Hart Lane earlier on Sunday. But goals from Arsenal centre backs Rob Holding and Gabriel were enough to give Arsenal a two point cushion over their north London rivals with four games to go. The victory means Arsenal will now not finish lower than sixth.

After a sloppy opening period for both sides, the first real opportunity of the game came from the hosts on the 30-minute mark after Takehiro Tomiyasu lost possession inside the West Ham half. The lapse in concentration gave the Hammers the chance to break and Vladimir Coufal's deflected cross fell for Manuel Lanzini at the far post but Holding was able to get his body in the way of it.

Less than five minutes later, Declan Rice had the first shot on target of the match. Running onto a Pablo Fornals pass, the highly sought-after midfielder tried to curl it in from 20 yards out but it was a comfortable save for Aaron Ramsdale to make.

Arsenal found the breakthrough against the run of play after Eddie Nketiah forced Lukasz Fabianski into a superb one-handed save. From the resulting corner, taken on the right by Bukayo Saka, Holding leapt highest to nod home for his first goal in the English top-flight. David Moyes’ side nearly hit back immediately but Ramsdale’s acrobatic save was enough to deny Rice once again.

Sky Sports Premier League
@SkySportsPL
Arsenal lead through Rob Holding's first ever Premier League goal!! 💥
As it stands they will go back above Spurs! ⬆️ 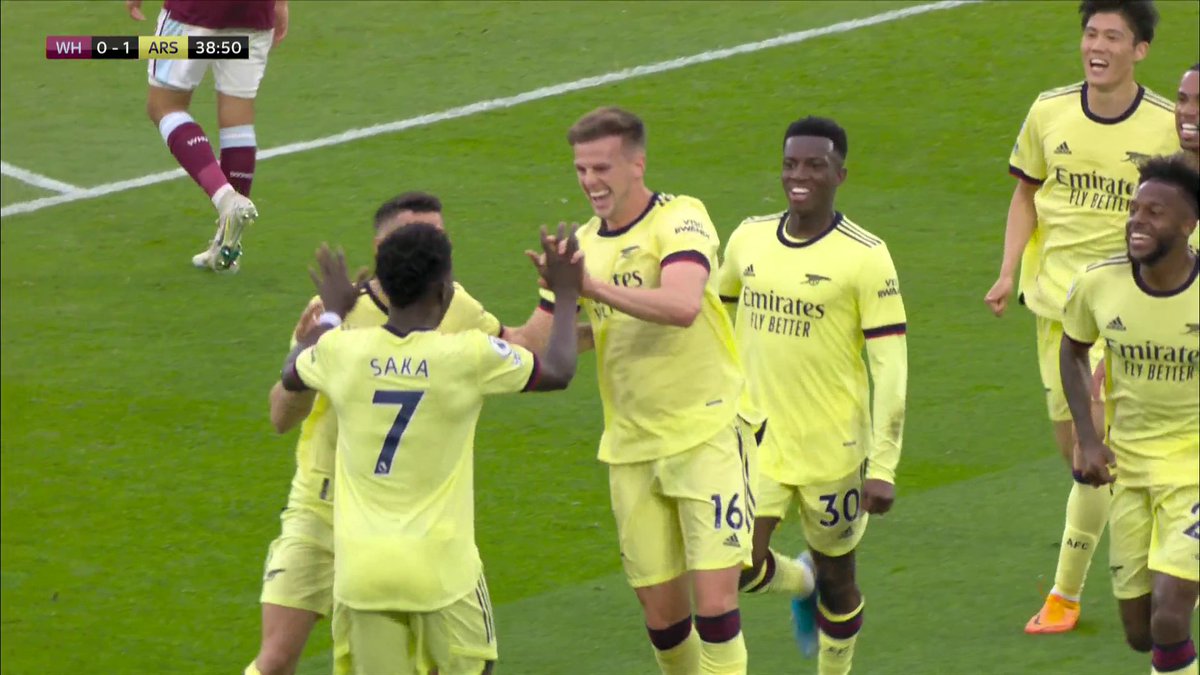 The Gunner’s lead only lasted six minutes though. Rice, once again in the thick of the action, found Coufal on the right flank and the Czech full-back then crossed to the unmarked Jarrod Bowen. The forward’s shot took a slight deflection as it found its way into the bottom of the net sending the London Stadium into pandemonium. The goal means West Ham have now scored in their last 19 home contests, a run that stretches back to May 2021.

However, Arsenal found themselves back in front in the second-half through another centre-back in Gabriel. Saka’s initial corner was headed clear, but Gabriel Martinelli was there to collect the loose ball and put it back in the area where the unmarked defender was waiting to head home.

The second goal from the visitors seemed to take the edge away from a boisterous London Stadium atmosphere, and the home side looked in desperate need of a spark. Nketiah nearly made it three ten minutes from time after Coufal played a poor backwards pass that put the striker through, but his effort was cleverly pushed behind by the excellent Fabianski.

Sky Sports Premier League
@SkySportsPL
It's a day for the centre-backs! 💪
Gabriel joins Holding on the scoresheet to put Arsenal back in front ☄️
78
802

The game finished in mildly dramatic fashion when Nketiah was booked for delaying a West Ham free-kick prompting a mini-melee between the teams, but in the end Arsenal had done enough for a massively valuable three points.

Next up for Moyes' men is the huge Europa League semi-final second leg on Thursday against Eintracht Frankfurt, where they'll have a mountain to climb if they want to overturn a 2-1 deficit against the Germans away from home. The Gunners are next in action in a weeks' time when they face relegation threatened Leeds United at the Emirates on Sunday.