The most important game of Mikel Arteta’s short managerial career? Quite possibly. The biggest game of Arsenal’s season? Definitely. The late goal that the Gunners conceded to Slavia Prague’s Tomas Holes not only changed the dimensions of the tie, but could change the entire feeling about Arsenal’s season.

Let’s be clear, it has been an underperformance in the Premier League from Arteta’s men. They currently lie 10th, with little chance of qualifying for the Champions League, and are out of both domestic cup competitions. It’s simple. The Europa League or bust for Arsenal this season.

We are nearly approaching two decades since the Gunners last won the title and it is fair to say, standards have declined in that time. Arsene Wenger to his credit, saw the club move into a brand new stadium while continuously qualifying for the Champions League, but since his departure, the side has regressed despite some reasonable investment.

Pepe, Alexandre Lacazette and Pierre-Emerick Aubameyang were meant to create one of the most fearsome front threes in the league, yet they have all fallen short at different points during the campaign. Defensively, there is no real solidity and in midfield, although Emile Smith Rowe and Bukayo Saka are brilliant youngsters and Thomas Partey was brought in for £45m, they are still a soft touch.

They may not want to be competing for the Europa League in an ideal world, but like it or lump it, they don’t have a choice at the minute. That is in contrast to fellow English side still in the competition, Manchester United, who have made real progress in the league this season under Ole Gunnar Solskjaer and will be competing in Europe’s premier competition once again next term.

For Arsenal, ten points off the top four, their only hope of Champions League football means winning this competition. First they must get past Slavia Prague and on Thursday night, they now need to score an away goal, otherwise they are out - and trophyless. For a side who were celebrating FA Cup success last summer and expected to build on their eighth place finish under Arteta, this has been an underwhelming season, full of frustration. 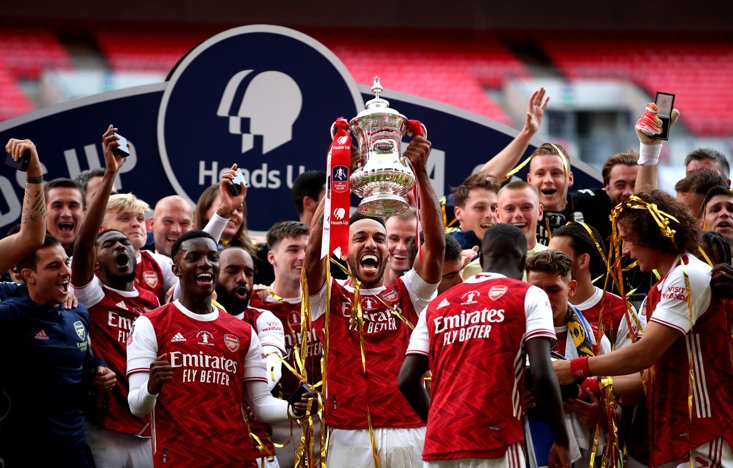 With growing rumours of discontent coming out of the training ground, the Europa League and this second leg against Slavia Prague, could make or break the gaffer. How much patience will the board give to a boss who lacked any first-team managerial experience before taking the job in N7?

After Wenger’s departure they tried the experienced, trophy-laden manager in Unai Emery with little success before then turning to a young boss who understands what it means to play for the club, having spent five years there as a player. It is difficult to see what option would be the right one at this moment in time for a club clearly in transition.

If Arsenal win the Europa League, all these troubles will be forgotten. Champions League football is what the club took for granted under Arsene Wenger and despite their poor league performance if Arteta can deliver that same outcome at the end of May, this season will have been a success.

However, looking at the other sides still in the competition, it is hard to see Arsenal pulling this one off, even if they make it past Slavia Prague in the quarter-finals. They are in the ‘easier’ half of the draw, with Villarreal or Dinamo Zagreb awaiting them in the final four, but in the final should they get there they will face a vibrant Manchester United side, Ajax or Roma. It’s a tough ask for a side who have repeatedly underperformed in key games this term.

This tournament, and the remaining seven Premier League games could be all Arteta has to prove he is still the right man for the job.