Football
News
The Gabonese forward has just 18 months left on his contract at the Emirates
Harry De Cosemo
14:00, 25 Mar 2020

Arsenal’s inability to manage the contractual situations of their biggest stars has plagued them for the best part of a decade. Bacary Sagna, Gael Clichy, Samir Nasri, Robin van Persie and Alexis Sanchez are just a few who have allowed their deals to run down in order to generate a move to a Premier League rival, while Aaron Ramsey, the most recent player to slip away, did so to Juventus last summer.

The fact the majority stay in England serves as proof of the problem; were the Gunners in a stronger negotiating position, they would be able to stop key members of their squad deferring to direct rivals.

Sometimes it’s not their fault, but they haven’t learnt either. Now, when they don’t have the quality to cope or Champions League football to help entice him to stay, talisman Pierre-Emerick Aubameyang has 18 months remaining on his deal. The Gabon striker stands alone as the best player at Mikel Arteta’s disposal, and an underwhelming season would be a disastrous one without his 17 Premier League goals.

At the age of 30, though, he is only going to decline as he reaches the end of his career; while he may want to depart in search of one final big contract, there is also logic in the Gunners themselves moving on and finding a younger figurehead.

Football is very much up in the air thanks to the unprecedented response to the coronavirus outbreak. Arsenal have been right at the forefront of the narrative as a worldwide issue has seeped into sport; first, their clash with Manchester City on March 11 was postponed after many people at the club came into direct contact with Olympiacos owner Evangelos Marinakis, who contracted the illness, during a Europa League tie.

Then, after all Premier League games were announced to be going ahead despite many calls for them not to, Arteta tested positive. That was the final straw, and no elite football in Europe has been played since. Everyone is waiting, with April 30 the latest date for a potential resumption, but everything is up in the air.

Matters on and off the pitch are clouded, including contracts. Should the season run on beyond June 30, which is entirely possible, some players will have their futures thrown up in the air. Though Aubameyang would still have a contract through most of the uncertainty, the knock on effect in terms of his value could be huge.

It is widely accepted that a player’s financial worth reduces in the final 12 months of his deal, meaning that Arsenal’s choice could be between selling him at a difficult time, with the action still going, or losing him for free. But that is subject to any changes that could be made regarding the transfer window. 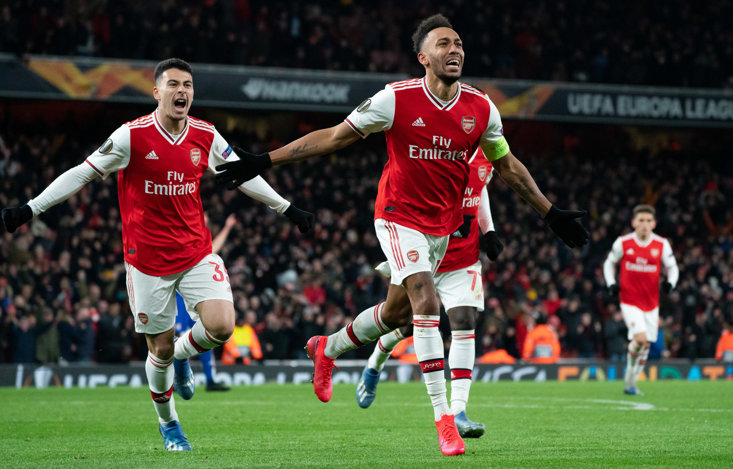 Aubameyang has scored 61 goals in 97 appearances for the gunners

Rather than allowing another situation to fall onto them and cause problems, Arsenal need to be proactive. They have long been linked with a deal to re-sign Donyell Malen, the young Dutch striker who has made a name for himself after being sold to PSV Eindhoven in 2018.

It is very easy to criticise the North Londoners for allowing him to leave with the benefit of hindsight; Malen took a chance he wasn’t likely to get at the Emirates Stadium. Much like with Serge Gnabry, once a floundering talent on a road to nowhere with the Gunners and now a star turn for Bayern Munich, he needed the move to reach his potential.

Malen, who is still only 21, has scored 21 goals in 49 Eredivisie games and once in four games for the Netherlands. While there is always a debate around signing strikers from Dutch football, which mainly centres around whether a club will be signing a Ruud van Nistelrooy or van Persie-type success story rather than an Afonso Alves or Ricky van Wolfswinkel-type dud, Arsenal will recognise what they could have here. Malen was impressive in the youth ranks, but sometimes a player needs a less congested and pressurised route into first team football to thrive. He has certainly received that.

Comparing him to Aubameyang seems unfair, and to suggest he’d make an ideal instant replacement would leave a lot to be desired. But Malen is physically strong even if he isn’t particularly tall, and has similar versatility; both men are able to play through the middle or on the left and aren’t strangers to pressing with high intensity from the front. The PSV man already knows the Arsenal way, he’s lived it.

The coronavirus has already delayed Euro 2020, but that could be a good thing for Malen. A serious knee injury has kept him sidelined for months, and he was deemed touch-and-go regarding Ronald Koeman’s squad for the tournament. That problem has since disappeared, and he’ll be looking to get back to form as quickly as possible.

At some stage in the future, regardless of Aubameyang’s situation, Arsenal should be considering a move to bring a diamond who has been cut elsewhere back home.