The three midfielders were deployed just behind captain Pierre-Emerick Aubameyang and wreaked havoc in a first half that saw Spurs crumble. Their movement and work rate off the ball kept the vocal home crowd on side but it was their quality on the ball that won Mikel Arteta’s team this game and should get Arsenal fans excited for the future.

Arsenal’s bright start was rewarded with a fully-deserved opening goal as the three young stars combined. Odegaard fed Saka on the right, and he slid the ball across goal for Emile Smith Rowe to finish. Smith Rowe was the only player alive in the box as he beat a static Spurs defence to give the Gunners the lead and send the home fans wild.

Spurs came back into the match in terms of possession, but Arsenal hit them with a brutal counter-attack. Smith Rowe and Pierre-Emerick Aubameyang combined with a clever one-two before the 21-year-old burst away from Japhet Tanganga before composing himself to find the Gabonese striker, who planted the ball in the bottom corner.

Arsenal, having recorded two 1-0 wins in their last two games against Burnley and Norwich City, were truly vibrant for the first time this term. Every time one of those three got the ball they looked to make something happen, while Aubameyang’s relentless running kept the Spurs back four on their toes.

Nuno Espirito Santo’s side hadn’t learnt from that rapid counter and were soon caught out again as Arsenal made it three. Harry Kane lost the ball up top and Smith Rowe, the standout player in the first half, fired the ball out to Saka, who drove at the Tottenham defence. Kane, who had sprinted the length of the pitch, managed to block the intended pass but only diverted the ball into his countryman’s path, and he gratefully slid the ball past Hugo Lloris to the delight of his manager on the touchline. 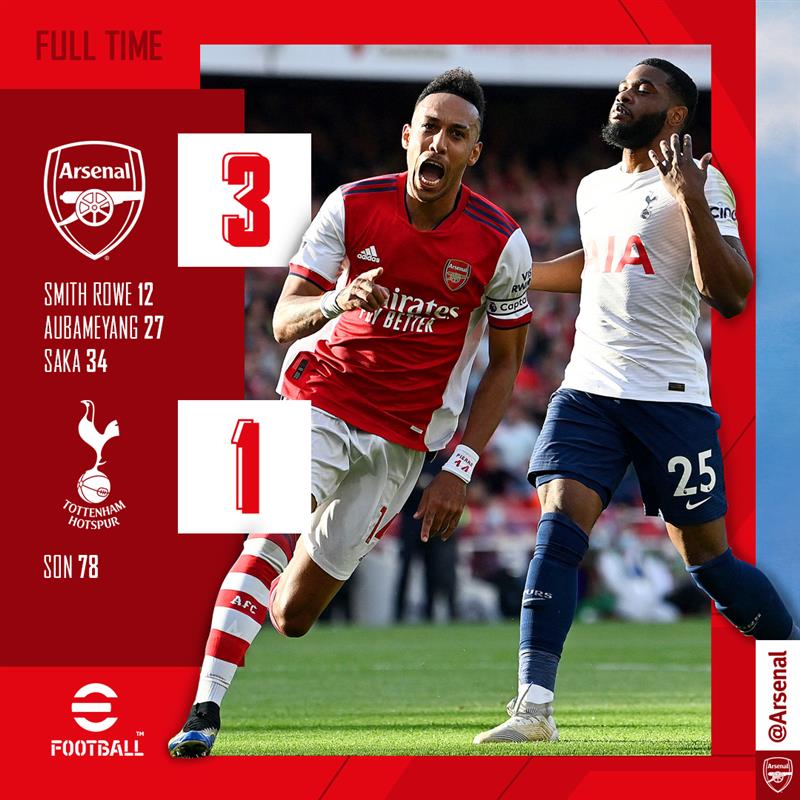 It was dominant and it was devastating, unlike anything we have seen from Arsenal over the last month. Tanganga and Dele Alli were withdrawn at the break by Nuno, but in truth he would have wanted to switch the entire starting XI such was their apathy in the first 45.

Kane had a decent shout for a penalty ignored, before missing a decent one-on-one opportunity. Whether it is to do with his failed transfer move or something else, this isn’t the same England captain we have seen firing in goals for club and country over the past five years.

Saka, who gave Sergio Reguilon all sorts of issues all afternoon, was only denied by a smart stop by the World Cup-winning goalkeeper, before Son Heung-min finished smartly with 10 minutes to play to make it an ever-so-slightly nervy finish for the home side. But, with a couple of clever substitutions, Arsenal saw the game out comfortably.

Three games into this Premier League season, Arsenal were rock bottom having failed to score a goal while rivals Spurs were sitting pretty at the top of the table with nine points from nine and zero goals conceded. Three matches later and Arsenal are now above their north London rivals in the table, having dismantled Tottenham 3-1 in a one-sided derby. With Smith Rowe, Saka and Odegaard, the future of this Arsenal side is in very safe hands indeed.