Character. Every top team has it. Every team with character can battle until the end. Setbacks, pitfalls, the best teams show they can weather storms and come out on top. This week Arsenal have shown an abundance of character. Trailing against Benfica in the Europa League and again here at Leicester on Sunday, they fought and produced impressive comebacks. They showed they can hack it.

When the Gunners gifted Youri Tielemans all the time and space in the world to march forward and rifle home for the Foxes after just six minutes, it looked like a worrying and well told story was about to unfold. But no, they battled back and were well deserving of their 3-1 victory.

Many things have been angled at Arsenal’s players in the modern era, since before the end of Arsene Wenger’s reign. They just weren’t cutting. They had fallen well below the standards set by Thierry Henry, Patrick Vieira and Tony Adams. As a club, they had lost their annual Champions League status, lost their best players to Manchester City and Chelsea and were no longer in the title race year after year. They became the top team others would poke fun at during their fall.

Used to such success and glorious riches, one imagines it has been hard following Arsenal in recent times. This week, though, fans will be supremely proud of their team.

The win in Greece over Benfica to progress in Europe was more dramatic but this win in the east Midlands was perhaps more impressive. Arsenal were in control. They suffered their early knock but didn’t wilt and falter. There were no moments of madness like Bernd Leno’s dismissal at Wolves after rushing out of his goal and handling the ball. They kept their composure, kept their cool and came back. 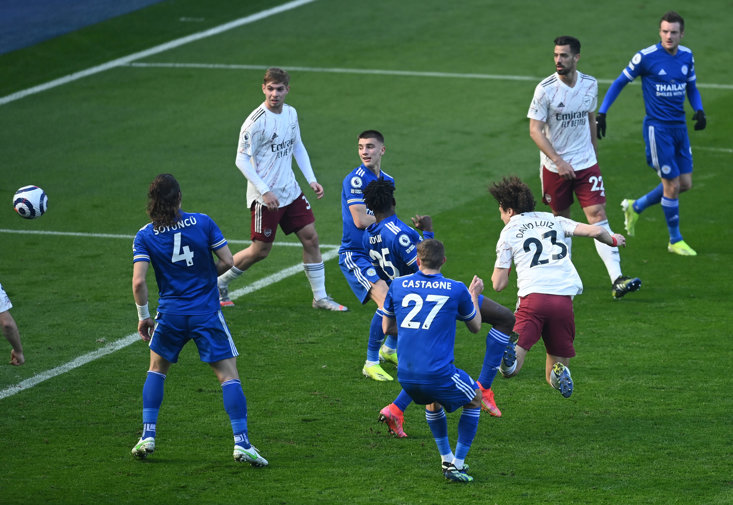 David Luiz got the equaliser, combining with fellow Brazilian Willian to head home his free-kick. Both players have faced criticism during their time at the Emirates but their quality shone through. Alexandre Lacazette then put the visitors ahead from the penalty spot in first-half added time. Nicolas Pepe, who arrived in north London for £72m in 2019, is another who has flattered to deceive but it was the Frenchman who made sure of the win on 52 minutes.

Often in the Premier League era, you’d be a brave soul backing a team in the bottom half to go to the side in third and beat them. However, this was different at the King Power Stadium. At kick-off, the Gunners were eleventh and Leicester were aiming to go above Manchester United and up to second. Of course, the table doesn’t lie but Arsenal have talent, they have quality and should be higher up the standings. This century they have ruled the football pyramid; this season, they have topped the bottom half of the top division. This isn’t where they are meant to be and the victory proved it.

Late in the second half as Leicester searched for a goal to get them back into the game, Gunners defender Pablo Mari matched Jamie Vardy for pace. He wanted the ball and got it. Arsenal more than matched Leicester too, and came away with three points to move into ninth.

They have so much quality but as the saying goes, hard work beats talent when talent doesn’t work hard. That may sound harsh as Arsenal’s players have toiled previously but now, this week, they have shown their battling qualities and it has paid off.

Manager Mikel Arteta had talked up the courage his team had showed midweek. He was be even more buoyed by the win at Leicester, still licking their own wounds from their 2-0 humbling by Slavia Prague on Thursday. Especially when you take into account Arsenal had made six changes to the team, have lost five matches immediately after participating in the Europa League and have managed just one win over the Foxes in their last six meetings. This was a big win.

"I'm really proud of the team and the character we showed," said Arteta after the game. "The senior players have to drive the boat forward, it can't be the other way around." Goalscorer Lacazette echoed his coach's comments and added, "Senior players need to be ready and not have to rely on the young players. These wins are good for the team, the spirit, the mood, everything."

The test for Arsenal now is maintaining these battling displays and showing character on a regular basis to bounce back when they are on the ropes.

For many sides in the Premier League, survival and success is about who fights and scraps the hardest. If Arsenal can fight and go toe-to-toe with their rivals every week, their quality will see them climb back to the top spots. It’s where they are meant to be.

Arsenal's London rivals Tottenham, meanwhile, hammered Burnley 4-0 at home to move back up to eighth. Gareth Bale rediscovered the form which saw Real Madrid sign him from Spurs in 2013, scoring twice and assisting another. Harry Kane and Lucas Moura netted the other goals for Jose Mourinho's side.