Mikel Arteta celebrated his 100th game in charge of Arsenal with a 1-0 victory over Watford at the Emirates Stadium on Sunday. It was just another step in the right direction for the Gunners, who now sit level on points with fourth-placed West Ham United. The job the Spaniard has done in recent months has seen his side transformed after their poor start to the season.

It was only back at the end of August when Arsenal were blown away by Manchester City in a 5-0 drubbing at the Etihad Stadium. They were bottom of the table with zero points, and the fans were vocal on wanting the former player out office. Arteta was the runaway favourite in the sack race in this brutal division, yet here he stands in November, a delighted boss in a week that has seen three managerial departures.

The evolution that his side have gone under in these last eight matches comes contrary to the direction of clubs like Tottenham Hotspur, Norwich City and now Aston Villa. They were quick to pull the trigger on their managers and the way Arteta has bounced back could make other clubs considering a change think twice about the best way forward. Regardless, Arsenal stuck by the apprentice of Pep Guardiola and they are starting to reap the awards as the Gunners are firing on all cylinders.

Since the schooling from his teacher, his side have not tasted a single defeat, picking up 20 points in their last eight matches (W6 D2) and they find themselves outside the coveted Champions League places on goal difference. It has been clear for weeks the difference in the performances among his players – they all want to get stuck in and are willing to chase down every ball.

There had been plenty of speculation over the commitment of captain Pierre-Emerick Aubameyang and his fellow striker Alexandre Lacazette, but they have both been magnificent in recent weeks with their pressing as well as contributions in possession, and they have helped to lead by example to inspire their team-mates. And what was more impressive with their victory over the Hornets on Sunday was that it was a glimpse of the old, resilient Arsenal. After having an early goal ruled out by VAR, the hosts did not falter and continued to press for the goal, showing the belief they now have in themselves and undoubtedly in their manager. 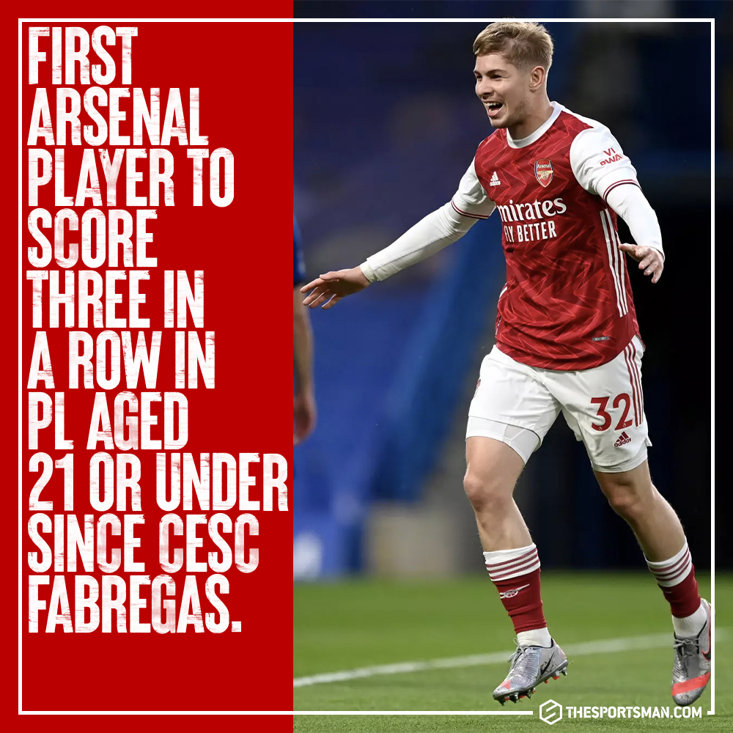 The players were committed in keeping the clean sheet as much as getting forward to score the key goal, with Ben White in particular looking more and more worthy of the £50 million fee Arsenal paid for him in the summer with each passing game. Match-winner Emile Smith Rowe continued with his fine form in front of goal, scoring his third in as many matches. They will have certainly given England boss Gareth Southgate plenty to think about after missing out on his November squad.

There was an early goal chalked off for Arsenal and Bukayo Saka for offside, with plenty of feisty challenges in the first half as referee Kevin Friend put his mark on the game. Veteran defender Danny Rose was struggling for the visitors against the speed of Saka, who was getting the better of the former Spurs man. Rose then conceded a penalty with a clumsy challenge on Lacazette, but he had Ben Foster to thank for denying Aubameyang from the spot. Watford had their own chance to edge themselves in front but Juraj Kucka’s effort from the edge of the box trickled wide of Aaron Ramsdale’s goal. Foster was called into action again with an instinctive save to deny Gabriel’s header from a corner.

Arsenal continued to threaten after the break and Smith Rowe was on hand to fire the Gunners into the lead, albeit Claudio Ranieri later had complaints about the Gunners not returning the ball to his Watford side after they had kicked the ball out for an injury to be treated. Ranieri’s side did have spells of possession, but there was a clear gulf in class between the two sides in the final third – and his long wait to beat the Gunners as a manager continues (P11, D4, L7). Substitute Martin Odegaard almost doubled the hosts’ lead but Aubameyang got a touch onto his goal-bound effort when stood in an offside position. Kucka was the dismissed for a second booking late on as Arsenal held out, and Arteta’s roll continues. Just as the board showed patience with their manager, the Gunners are being rewarded on the field for keeping going even when things appear not to be going their way.