On March 25th 2019, Jadon Sancho celebrated turning 19-years-old, with the England national football team in Montenegro gearing up for what could turn out to be his fifth international cap for country with an appearance at the Podgorica City Stadium for their second European Championship Group A Qualifier.

For my 19th birthday, I was in a casino in Blackpool tanked up on weak Jack Daniels and Coca-Cola preparing for a mingin’ night in a crap BnB a good half-mile from the promenade.

As Sancho enters the last year of his teens, his escalation into the pantheon of exciting young European talent - a real buzzword in footballer chatter - over the past year has been nothing of sensational.

Taking - along with compatriot and mate Reiss Nelson the following season - the brave decision to venture onto the continent, ignoring the temptation to stay with Manchester City and move to the German Bundesliga with Borussia Dortmund in 2017, it’s hard to argue that Sancho would find himself in the same stratosphere had he remained at Eastlands. But to claim that his acceleration was guaranteed certainly undervalues his ascension across the past two seasons, when he was brought in to replace the departed Ousmane Dembele, now of Barcelona.

In the same summer, Reece Oxford, Sancho’s elder by 15 months, also accepted a move to Germany, going on loan Borussia Monchengladbach. Of course, as a centre-back, the West Ham loanee will never be as eye-catching, but across that same period of time Oxford, now in another loan spell at FC Augsburg has managed a total of 11 appearances.

Ryan Kent - now at Rangers on loan from Liverpool - ventured to SC Freiburg, and the Reds’ cross-town neighbours allowed Ademola Lookman to have a short stint at RB Leipzig as Sancho set out on his next career path. Together, Lookman and Kent accumulated 17 Bundesliga appearances between them.

Sancho has close to half a century - a figure he will almost certainly surpass before the end of the season, having been part of the furniture in every league game this season, only starting off the bench on seven occasions.

The October '18 Bundesliga Player of the Month, Sancho has been nothing short of deadly in the Dortmund attack. Alongside his eight domestic strikes, this season he has the joint-highest assist record in any of Europe’s top five leagues this season, with 12. Who he’s sharing that prestigious pedestal with? Lionel Messi.

The winger is contracted at die Schwarzgelben until 2022, and though the German outfit have done extremely well to harness his talent and place a great deal of faith in such a young player and afford him time on the big stage.

He was part of the 2017 FIFA Under-17 World Cup winning England side. In the 2017 UEFA European Under-17 Championship, featuring in all six of the Finals games and creating or scoring a goal in each of them, Sancho was granted the title of Golden Player in Croatia for most valuable player of the tournament, following in the footsteps of only two Englishmen before him; Connor Wickham and Wayne Rooney.

On October 12th 2018, Sancho was granted his international first-team debut by (Sir) Gareth Southgate becoming the 1236th player for the England national side,. At the age of 18 years, six months, and 17 days he weaselled his way into the top-ten youngest Three Lions’ debutants

He’s now the 11th after Callum Hudson-Odoi took to the pitch on Friday at Wembley in the 5-0 rout of the Czech Republic.

Unless there are a series of drastic, unforeseen turn of events, - of which we as England fans hope to high heaven there aren’t - place good money on Sancho being in that squad for the multi-country Euros taking place in 2020. In his four appearances for England, he already has two assists and will be thirsty to add to that tally

Disregarding the UEFA Nations League competition, of which England currently find themselves in the semi-finals to take place in June in Portugal, based on individual and team form, before he turns 21-years-old Sancho could well be helping England to lift their first international tournament trophy since ‘66.

Now go and re-evaluate your life. 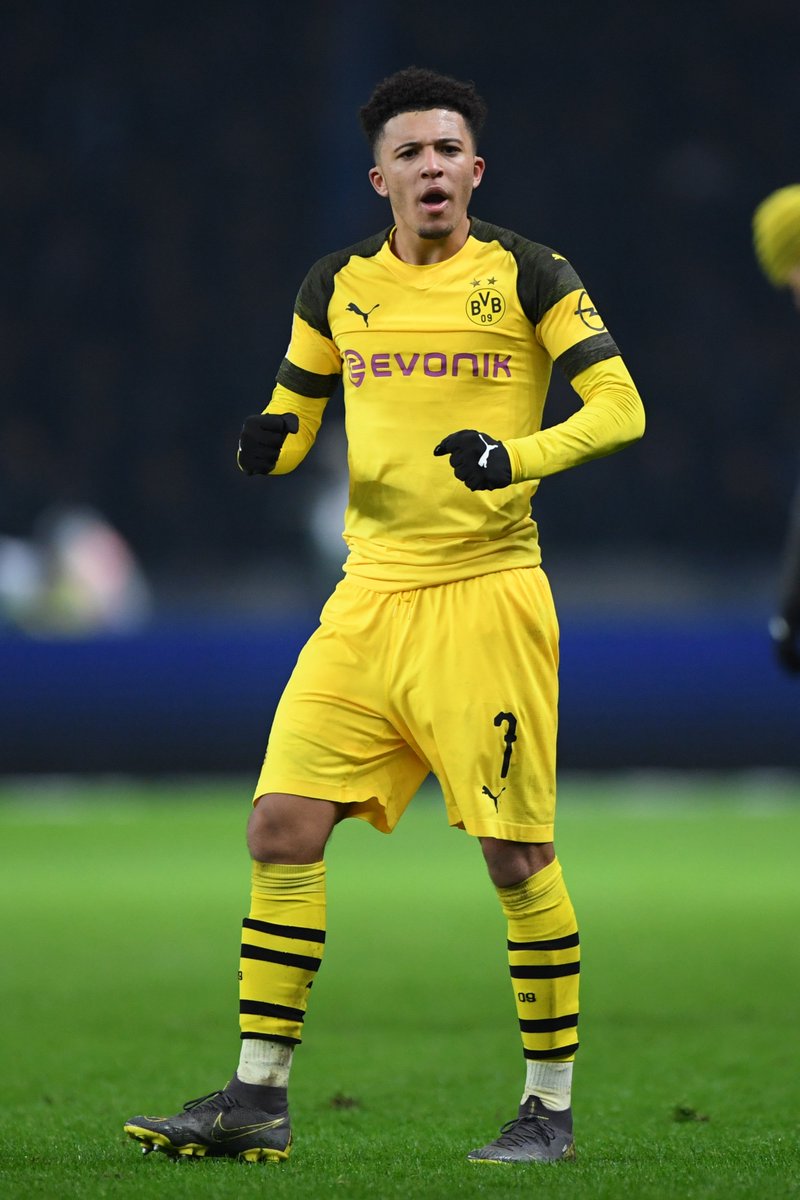 7
138
More
football
Get Ready For A Nostalgia-Fest With Italia '90 Podcast Vincerà!
Hosted by Mark Godfrey and running from June 8th to July 8th, Vincerà! is a 24-part podcast series [ ... ]
football
Harry's Heroes, Vinnie Jones And Revenge At The Battle Of San...
When Vinnie Jones started crunching San Marino players left, right and centre, it was clear the friendly [ ... ]
football
Prodigal Talent Of The German Game Is Turning RB Leipzig Into...
This article first appeared in The Sportsman on 07/12/19 What were you doing at the age of 28? If it [ ... ]
football
''I Was Really Wasted'': When Jurgen Klopp Woke Up Hungover...
This article first appeared in The Sportsman on 05/09/19 Anyone watching the Amazon Prime documentary [ ... ]
football
Book Review - Yer Joking Aren't Ya?: The Story Of Middlesbrough's...
In 1997, Middlesbrough Football Club reached the finals of both the League and FA Cup, had the might [ ... ]
football
Carragher's Brilliant Podcast Shows The Greatest Games Are The...
What’s the greatest football game you’ve ever seen?  Jamie Carragher doesn’t [ ... ]
football
Red Bull And The Football Training Centre Of The Future... Today!
It is now 33 years since Red Bull sold its first ever energy drink. Pre-April Fool’s Day 1987 [ ... ]
football
On This Day Messi's Barcelona Tally Hits 500 In El Clásico Triumph
If you’re going to hit a milestone, and one that no one in your club’s illustrious history [ ... ]
football
The Secret Behind The Success Of Lineker, Shearer And Wright's...
The unavoidable hiatus to the broadcast of the BBC’s flagship football programme will not deny [ ... ]
football
Neymar Jr... Junior! Santos Like The Look Of Ronaldo-Imitating...
On March 7 2009, a slightly-built 17-year-old from Mogi das Cruzes, São Paulo, walked out onto [ ... ]
football
Business As Usual: A Beginners Guide To The Belarus Premier...
If you’re going out of your mind without your football fix, well we’re sorry you just haven’t [ ... ]
football
Why June 30 Could Be D-Day For The Fate Of Premier League Season
England captain Harry Kane has added his voice to the growing calls for the Premier League season to [ ... ]
football
You Heard It Here First - Brescia's Sandro Tonali Is Italy's...
Since winning the World Cup in 2006, it has been turbulent time on the international stage for Italy. [ ... ]
football
A Reunion With Ancelotti Could Resurrect Rodriguez's Stuttering...
No club chews up and spits out world class players quite like Real Madrid. Yet, their sense of entitlement, [ ... ]
football
'Quickly Kevin' Is The 90s Football Nostalgia Podcast To Beat...
While the majority of sports podcasts scramble to fill the minutes within the disruption of the [ ... ]
football
Where Did It All Go Wrong For Phil Neville And The Lionesses?
Winning, Phil Neville recently said at the SheBelieves Cup, is what would bring England’s women [ ... ]
football
''Drop A Few Hand Grenades'' Keegan's Advice To Scholesy The...
A packed out Wembley roared like one of those indomitable Three Lions to greet England’s new messiah. [ ... ]
football
Rise Of The Couch Coach: Coronavirus Causes 119% Surge In Football...
Thousands of us are flocking to virtual reality and gaming to help fill the void of no live football, [ ... ]
football
Review: Diego Maradona - Drop Yourself Into The Great's Chaotic...
When Diego Armando Maradona arrived at Napoli in 1984 for a world-record fee, the entire city ground [ ... ]
football
Arsenal's Tough Choice - Is Donyell Malen The Ying To Aubameyang?
Arsenal’s inability to manage the contractual situations of their biggest stars has plagued them [ ... ]
football
Robbie Fowler Is Making His Mark As A Manager With Brisbane...
The curtains came down on one of the last bastions of football standing in 2020 this week. Before the [ ... ]
football
Long Live The King: Eric Will Always Be Manchester United's...
“If ever there was one player, anywhere in the world, that was made for Manchester United, it [ ... ]
football
I Was There - The Day Football Came Home To Wembley
The closest I ever got to attending the original Wembley Stadium was on its final day in operation in [ ... ]
football
'Sunderland Til I Die' Heads To The Boardroom In Netflix's Second...
The docks have been left deserted. The wealth has dried up. Wearside has become an impoverished place [ ... ]
football
How Chief Creator Silva Became New Face Of Premier League
Football has been cast into uncertainty by the coronavirus pandemic. As it stands, nobody is sure if [ ... ]
football
Lookback:Chelsea 6-0 Arsenal When Arsene's 1000th Game Went...
It was supposed to be an occasion to celebrate for Arsene Wenger, but his 1000th game in charge of Arsenal [ ... ]
football
Ronaldo, Kane, Hazard - The Winners And Losers Of Euro 2020...
So as of this week Euro 2020 became Euro 2021. Another casualty of the global Coronavirus epidemic. [ ... ]
football
Time To Act And Move The Premier League Transfer Window
When my husband had an ear infection, I used my medical knowledge to help him. I said the best thing [ ... ]
football
Southgate Shows Strong Leadership With Rallying Cry To Fans
England head coach Gareth Southgate has sent a rousing message to national team fans as football continues [ ... ]
football
Lookback:Spurs And Chelsea's Eight Goal Thriller
In the three full seasons of Jose Mourinho’s first spell as the club’s manager, Chelsea [ ... ]
This website uses cookies
Cookies help us and our partners provide statistics. By browsing this website, you consent to the use of cookies in accordance with our Privacy Policy and Cookies Policy.
Accept & Close