Football
News
As The Lionesses Take To The Main Stage We Reminisce About The 1998 World Cup At Glastonbury
Lee Coan
17:05, 27 Jun 2019

It was back when England still had global superstars. Back when Glastonbury still had a slight edge - full of new age travellers, crusties and dog-on-a-string types. People didn't pay to get in, they climbed fences, I was a teen and went with about fifteen quid to last me four days. God was it damp.

The rain in 98 is stuff of legend. Stages sunk, people died, I had no coat because I was young and stupid, I bought a bin bag for a pound, made armholes, looked cool. If I could have afforded a second bag, I may have made a hat. The Wendy House I was sleeping in washed away on the first night, we retreated to sleeping in the car. Then that started to sink, to the point where we could no longer open the doors because the mud would flow in. We had to climb in and out through the boot.

Soon it got to the point that you couldn't even walk around the site because the mud was so deep. I saw Bob Dylan stuck in the back of a stranded Land Rover, as shivering mud zombies shook the vehicle. I will remember his scared little Bob Dylan face until my dying day.

A highlight was when organisers decided to use the "toilet machine" to get the flooded dance tent open again. This beast was traditionally used to suck litres of poop from Portaloos into the safety of a giant tank on wheels. They thought they might be able to do the same with mud to let Moby play. Except they hit the blow button instead of suck. Now the dance tent was not just full of mud but also human poo. Happy days.

In the middle of this was World Cup fever. Glen Hoddle, Michael Owen, a lack of Gazza, Zinedine Zidane at his most "Zi-zou", Allez les blue, etc, etc. Ah, World Cup 98 - England had talent, France was sunny, Fat Ronaldo was just ridiculously brilliant. No surprise that in muddy Somerset, thousands of people abandoned the festival and went home. Why would you stand sinking in freezing excrement watching Sonic Youth, when you could be watching Bergkamp’s class indoors with a reasonably priced beer?

The game on early Friday evening was unmissable, even Michael Eavis with his upside-down head knew that. England Vs a very decent Colombia. In Group G we had beaten Tunisia (Shearer then Schooooooles at the death). But then we lost to Romania, making the whole country moan about why Gazza had been left at home. "Hoddle you tit." "I blame Eileen Drewery." We had to get a result against Colombia. 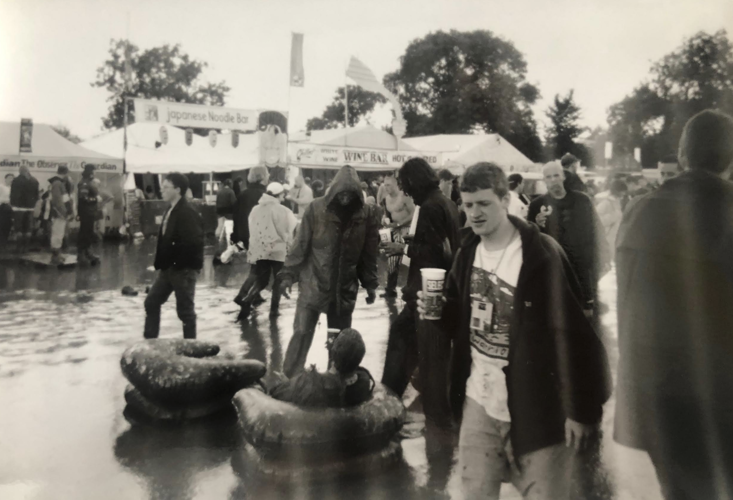 Michael Eavis' plan was to screen the match in the cinema tent. Cue the biggest deluge of the weekend. Quickly the combination of crowds and biblical mud made the tent inaccessible. I, massively sulking, couldn't see the screen, and had to abandon the game to go watch Foo Fighters on the Pyramid Stage (which due to a fire wasn't even pyramid shaped - this is how sloppy Glasto 98 truly was). Foo Fighters weren't big back then, not compared to football in an inaccessible canvas covered bog. You could literally walk along the front barrier, as Dave Grohl made jokes about the match we were missing. At one point he completely gave up singing and started kicking a beach ball around the stage pretending to be Alan Shearer. Then a miracle happened, proving Glastonbury really is some kind of sacred holy land.

A genius (it may have been on Dave Grohl's orders tbf) put the remainder of the match on the stage's big screens. David Beckham scored a typical belter, England went through to the next round, where they'd lose to Argentina in one of the most memorable games in England World Cup history. Despite how culturally important that Argentina match was, I have no idea where I watched it. I will however never forget where I saw us beat Colombia. Mud, Grohl, Becks, bin bag for a coat. Good good times. 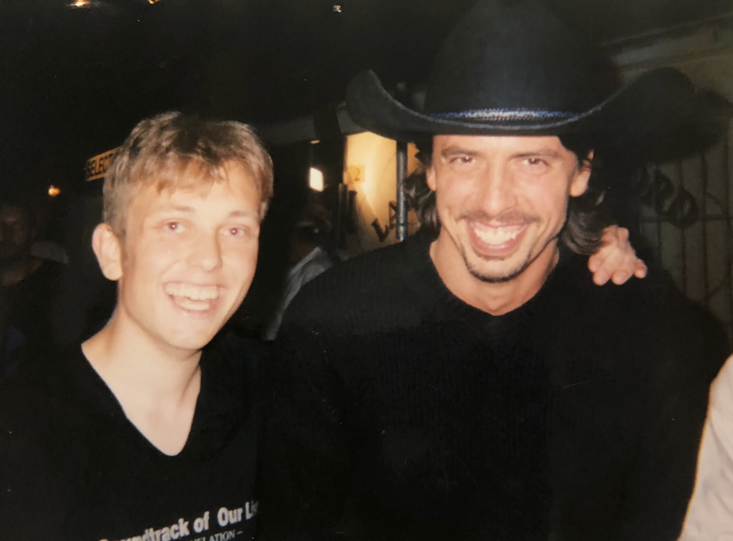