The troubled tourists were reduced to 36/4 and there was a sense of 'here we go again, again, again' on the third day at the SCG.

It was Chris Silverwood’s side’s first innings since feebly being bowled out for 68 in Melbourne as they lost the Ashes after just 12 days of cricket. And it looked like they could sink to even deeper depths with the humiliation of being bowled out twice in a day.

But Ben Stokes (66) and Bairstow’s (103 not out) battling, then aggressive, fifth-wicket partnership of 128 avoided another embarrassing collapse. Mark Wood’s useful lower-order hitting, 39 off 41 balls, in a quick-fire 72-run stand with Bairstow clawed the visitors closer to Australia’s mammoth first-innings 416 as they finished the day on 258/7, trailing by 158 runs.

It’s a special day in the Australian cricketing calendar as the ground turns pink and the players sign hats to be auctioned for the foundation set up in her memory, which pays for nurses to care for patients suffering with the illness.

And Bairstow produced a poignant hundred, after a tough three years in Test cricket, just days after the anniversary of his dad’s death.

In the morning session, England’s openers once again failed as first Haseeb Hameed and then Zak Crawley were bowled cheaply by Mitchell Starc and Scott Boland.

Cameron Green accounted for Dawid Malan before Boland, who destroyed England with 6/7 in the second innings at the MCG, struck again to dismiss captain Joe Root for a duck as the tourists lost three wickets in an incredible 70-ball spell without scoring.

And what a difference the change of year made for Root. The England skipper enjoyed a record-breaking 2021 as he racked up over 1700 Test runs, only Sir Viv Richards and Mohammad Yousuf have scored more in a calendar year.

Root started last year with hundreds in three successive Tests against Sri Lanka and India and he carried on that fantastic forms as his superpowers papered over the huge cracks in his side’s chronically failing batting line-up.

As special as Root’s heroics were, the rest of the batters picked up an unwanted record of their own. England amassed a record 54 ducks last year, but Root — after contributing once to the unfortunate record — was their first of 2022.

But Stokes and Bairstow’s belligerent partnership, only England’s third century-plus stand of the series and first which didn’t involve Malan and Root, is hopefully a sign of things to come as they try to rebuild after the crippling disappointment of this tour.

Stokes was dropped on nine and then given a reprieve in a bizarre moment when he was given out lbw when the ball hit off stump without dislodging the bails. Had he been bowled England would have been in disarray at 57/5, but you have to ride your luck like Australia’s batters have at times during this one-sided series.

The fight showed in that partnership Stokes’ bravery in particular, as he was visibly struggling with the side strain which forced him to stop bowling on the second morning, was what England so desperately craved earlier in the series.

Both players were battered by Australia’s quicks; with Bairstow taking a brutal blow on the fingers by Pat Cummins. But they showed grit and determination under the most intense pressure before some lusty blows gave England a puncher's chance. 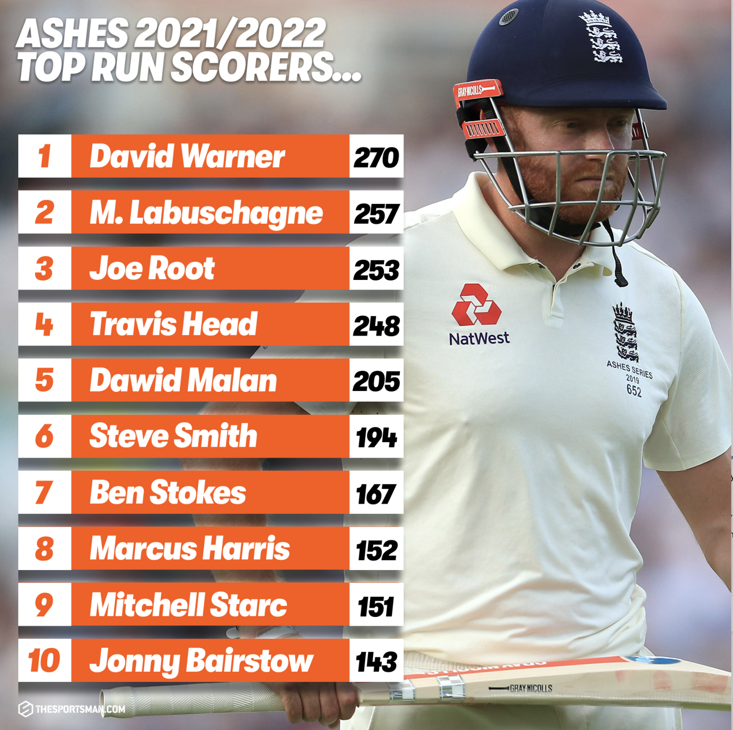 But Stokes was trapped lbw by Nathan Lyon before Jos Buttler’s soft dismissal for an eight-ball duck exposed England’s long tail. But Wood’s swashbuckling cameo, including smashing No1 Test bowler in the world Cummins for successive sixes, was one of the highlights of the miserable tour.

England will need Jack Leach, Stuart Broad and James Anderson to stick around with Bairstow for as long as possible tomorrow to eat into the Aussies’ lead. That, alongside the showers which have littered the match, would give them the best chance of avoiding heading to Hobart 4-0 down and staring down the barrel of a painful 5-0 whitewash for only the third time since the 1920-21 trip down under.