Jos Buttler’s day had started so well. England had set up to attack Marcus Harris on the leg side, with Haseeb Hameed stationed as a leg slip. The Australia opener fell into the trap, flicking a Stuart Broad delivery down the onside, and Buttler sprawled brilliantly to take a sensational catch.

Australia were 4 for 1 in the eighth over, and England had the early breakthrough to go with a sense of control in the opening half-hour with the ball. Things were looking good for the tourists.

But the Aussies ended day one of the second Test in Adelaide at 221 for 2, with Buttler’s form behind the stumps being a large reason for the hosts having built such a position of dominance. Despite that great take to dismiss Harris, the wicketkeeper will go to bed tonight ruing two huge missed catches as Marnus Labuschagne was dropped on 21 and, most shockingly of all, on 95.

Labuschagne had joined David Warner at the crease at a time when Australia were struggling to get runs on the board against the returning Broad and Jimmy Anderson. The number three got the scoreboard ticking over initially, scoring 10 off his first nine balls, but then he too found difficulty in getting into a rhythm, failing to score a single run off his next 37 deliveries faced.

While England were failing to trouble Australia extensively, they were playing the patience card and tea came up with only 45 runs on the board from 25 overs. Broad, Anderson, Ollie Robinson, Ben Stokes… whoever batted, England were keeping the normally free-scoring Warner in check and Labuschagne was failing to get much out of them either.

But this was a bowling tactic which felt like it could only work if England then snaffled their chances when they arrived, and when Labuschagne attempted to pull a Stokes ball down leg side Buttler almost went too quickly in his dive towards the ball, resulting in a costly drop with the batter on 21 and Australia 62 for 1. 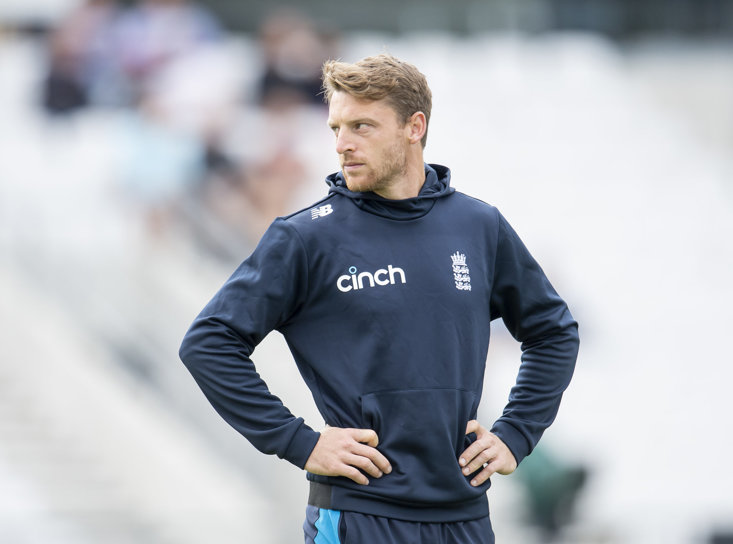 BUTTLER'S PAIR OF DROPS WERE KEY IN THE DAY 1 PROCEEDINGS

England paid dearly. By the time Warner carelessly whacked a drive through the covers straight at Broad, he had made 95 and the pair had added 172 for the second wicket. After falling six short of a century last week in Brisbane, Warner again failed to convert when in the nineties.

Another costly moment was to follow for England, though. Having taken the new ball under the lights in the night session, they continued to work at the patience of the Australian batters. And when Labuschagne provided a regulation outside edge to a teasing Anderson delivery, Buttler somehow shelled the easiest of chances as it went in and out of his gloves to the disbelief of everyone in the Adelaide Oval.

Labuschagne was on 95 at the time, and it would have been a huge psychological boost for England to have grabbed both of the established batters shy of their centuries. Instead he is still there at the end of the day and he and Steve Smith could be well positioned to accelerate on day two and give the Aussies a huge first-innings lead.

Labuschagne has ridden his luck. Besides the drops, he played and missed at a huge number of deliveries. But that is what made it all the more important that England made the most of it when he did get the nicks that came.

As happened on day two in Brisbane, England bowled relatively well. But, again, it is a sloppiness in the field which has undermined their efforts on a potential swing day in this Test series. If they had managed to make inroads after losing the toss, they could have taken a key lead in proceedings in Adelaide as they bid to level the series against a home side lacking both Pat Cummins and Josh Hazlewood from their bowling attack. Instead, they are behind the eight-ball going into day two and a tough couple of sessions tomorrow will see them fighting to avoid going 2-0 down.

It could have all looked so different.