Cricket
News
Stokes dragged England back into The Ashes after finishing with an astonishing 135 not out in the 3rd Test
Katherine Lucas
08:12, 27 Aug 2019

With every switch-hit, Ben Stokes eclipsed Botham of ’81. In the process, the third Ashes Test at Headingley surpassed every match that most of us will ever see.

A display of defiance, sheer bloody-mindedness, and courage when all around him, wickets were tumbling.

Contrast all those emotions with the looks of despair on the faces of Jos Buttler and Jonny Bairstow following their dismissals, the expressions of anguish knowing that with their walk-offs likely went England’s last hopes of staying in the series.

Contrast him too, with the brilliantly reserved, quite possibly petrified Jack Leach, wiping his glasses before facing a 90mph hurtler from Pat Cummins.

‘Redemption’ has been the theme this series. With a recovering Steve Smith watching on from the pavilion, his title has been snatched by England’s hero of the hour, Stokes’ prior misdemeanours becoming a memory more and more distant.

Some bookmakers have already stopped taking bets on the 28-year-old being named Sports Personality of the Year. This was a career-defining innings and his greatest achievement since…well, last month.

According to the ICC’s official rankings, Stokes is only the fourth highest-ranked all-rounder in Test cricket behind Jason Holder (West Indies), Shakib Al Hasan (Bangladesh), and Ravindra Jadeja (India).

None of those has come close to shining through in the manner that Stokes has this summer, abetted admittedly by his teammates’ ineptitude in falling to 67 all out in the first place.

It is also hard to escape the fact that Australia did not bowl well in the second innings. There is no way around that. Fate was not on their side either, and Nathan Lyon will know well he may have just fumbled away the Ashes.

That should not have been enough to hand England this lifeline, however, and only a player of the highest calibre imagined it was possible going into what turned out to be the final session.

While Jadeja can consistently control a game with the bat – by and large – and Holder is one of the most domineering physical presences around, there is nobody playing quite like Stokes at this current moment anywhere in the world.

To contextualise his form, with 35.86, he now has a higher average in this format than Andrew Flintoff, aided further of course by his 115 at Lord’s in the second Test. Only fitting then, that this man for the big occasions has been newly reinstated as vice-captain.

As well as his stunning second innings, he also took four wickets in the match, including figures of 3-56 to restrict Australia to 246 second time out. In some corner of that exuberant English dressing room, a perplexed Jofra Archer must be wondering what parallel universe exists where he can bowl like he did, take eight wickets and somehow come out of the third Test as an understudy, a small sub-plot in one of the most exhilarating narratives of all time.

England fans and former players were revelling in Stokes’ exploits – here’s some of the best reactions: 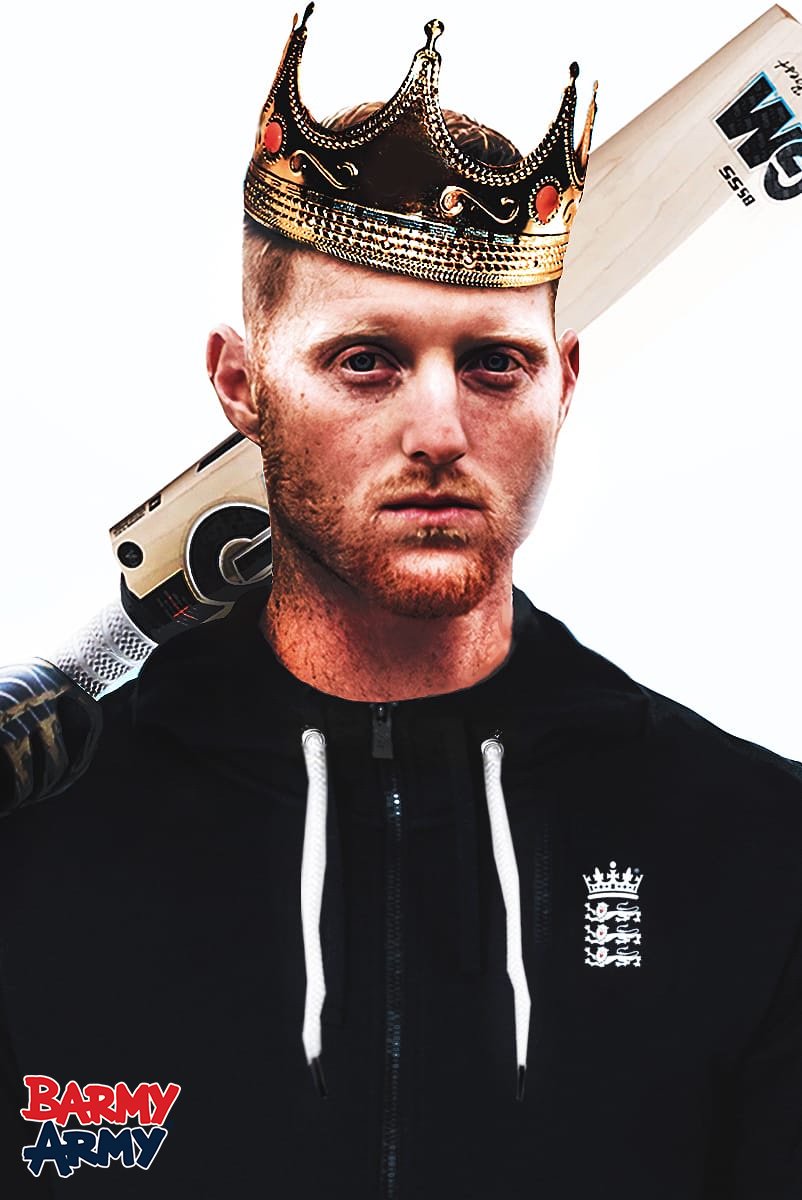 Cricketwallah
@cricketwallah
Knighthood for Ben Stokes! What a year for the all-rounder: won World Cup for England and now brought them back into the Ashes with as extraordinary a century you will evwr see. Ian Botham has found a rival for most influential English cricketer ever
244
2016

PHOEBE
@phoebe_baddeley
One of the greatest innings ever! BEN YOU KEPT THE ASHES ALIVE FOR ENGLAND 🏴󠁧󠁢󠁥󠁮󠁧󠁿I'm been bloody serious but it was even better then the World Cup performance ONE OF THE BEST MOMENTS EVER WHAT A MAN #BENSTOKES COME ON ENGLAND 🏴󠁧󠁢󠁥󠁮󠁧󠁿 ITS BEEN A BLOODY UNBELIEVABLE DAY AND GODAM INSPIRING 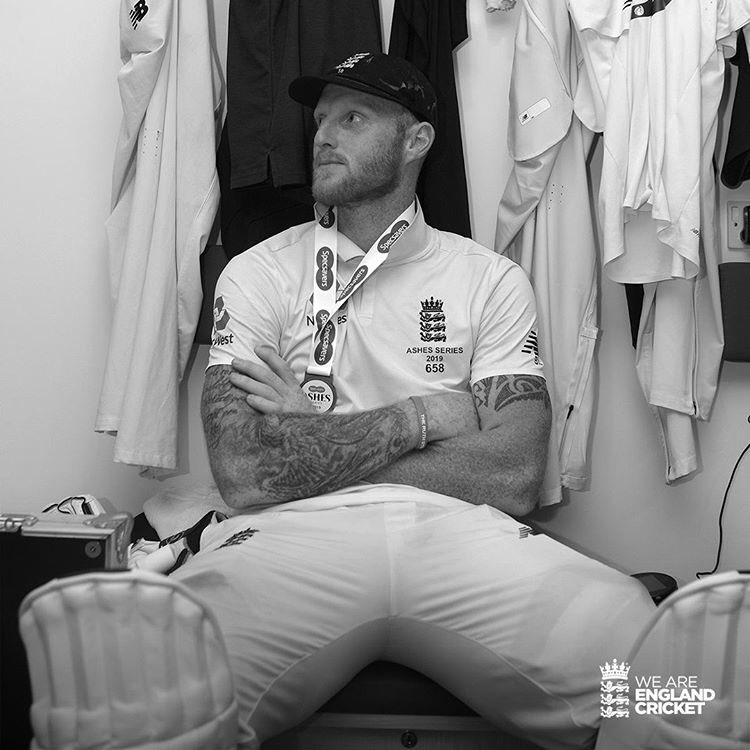 Graemefowler
@GFoxyFowler
That is the greatest test innings I've ever seen, by Ben Stokes. I cannot imagine a more important inning. Wow. What a player. That's how to cope with pressure. Truly a legendary performance. #ibow
33
660
x
Suggested Searches:
Tyson Fury
Manchester United
Marcus Rashford
Lewis Hamilton
F1
Air Jordan
More
cricket
Brittle England Beaten Inside Two Days As India Survive The...
It was one of the most chaotic days of Test cricket ever but by shortly after tea on day two in Ahmedabad [ ... ]
cricket
Sidebottom Wants To See Both Broad And Anderson Play Third Test...
Former England bowler Ryan Sidebottom says England ought to select both Stuart Broad and Jimmy Anderson [ ... ]
cricket
The Hundred Can Help Revolutionise Women’s Cricket And Inspire...
The long-awaited The Hundred competition is set to revolutionise cricket and will finally kick off this [ ... ]
cricket
Should Test Cricket Lose The Toss After India's Battering Of...
England have nobody to blame but themselves for the manner of their 317-run mauling at the hands of [ ... ]
cricket
Sidebottom Hails ''Fantastic'' Root And ''Stunning'' Anderson...
Ryan Sidebottom has heaped praise on both Jimmy Anderson and captain Joe Root following England’s [ ... ]
cricket
Fantastic Jimmy Anderson Wraps Up A Statement England Win In...
England wrapped up a dominant First Test win over India on Tuesday, with Jimmy Anderson collecting three [ ... ]
cricket
100 Up! Joe Root's Timely Form Could Be The Difference For England...
He is the baby-faced batsman who slotted into England’s line-up in India in 2012-13 and immediately [ ... ]
cricket
Tailenders Is The Easy-Listening Pod That Takes An Alternative...
At the moment, we’re all enamoured with cricket, thanks to India digging in and out-saucing the [ ... ]
cricket
The New Book Shining A Light On The Biggest Scandal In Cricket...
It has been nine years since the News of the World ceased publication. Nine years. Doesn’t time [ ... ]
cricket
How Botham And England Revived The Spirits Of A Nation At The...
In the summer of 1981 a combination of spiralling unemployment and racial tension had led to riots in [ ... ]
cricket
Ben Stokes Inspires England Victory In Five-Day Test Classic
This was five-day test match cricket at its finest. Ben Stokes took the final three wickets on Tuesday [ ... ]
cricket
Batting Legend Tendulkar Warns ICC Five-Day Tests ''Should Not...
If you’re looking for a cricket batting record, odds on Sachin Tendulkar probably owns it. The [ ... ]
cricket
England Head To South Africa Test In Search Of Answers And A...
England end a historic 2019 by taking on South Africa in the First Test in Centurion this week. But [ ... ]
cricket
England World Cup Winner Moeen Ali's Conscious Uncoupling From...
“I just want to get that buzz back”. England’s Moeen Ali has continued to put [ ... ]
cricket
England Fail To Win A Test Series In A Calendar Year For First...
England have lost another Test series in 2019, which brings to a close a difficult 12 months that has [ ... ]
cricket
Joe Root Double Century Gives England A Glimmer Of Hope Against...
Joe Root hit a stunning double century to give England a slight hope of victory against New Zealand [ ... ]
cricket
Pope Steps Up After Baffling Selection Leaves England Short...
It is ever difficult to predict exactly what will unfold when England go on tour. Ollie Pope, a man [ ... ]
cricket
Book Review - Ben Stokes: On Fire
Like rugby, cricket fancies itself as a bit of a proving ground for leadership and performance techniques, [ ... ]
cricket
Ben Stokes Throws His Weight Behind ''England's Best'' Joe Root
Ben Stokes has leapt to the defence of under-fire England Test captain Joe Root following the heavy [ ... ]
cricket
The Time Has Come For Joe Root To Step Down As Captain And Focus...
Joe Root loves a soft dismissal these days.  Should England decide to move him aside as captain [ ... ]
cricket
Steve Smith's Welsh Fire To Face Oval Invincibles In First Game...
Steve Smith and Jonny Bairstow will clash with Jason Roy and Sam Curran in the world’s first-ever [ ... ]
cricket
England's 'New Era' Gets Off To Worst Possible Start Against...
England's 'new era' under Chris Silverwood got off to a humiliating start with a huge innings [ ... ]
cricket
Why England's T20 Triumph Over New Zealand Matters More Than...
There could not have been a more fitting antidote to the slightly subdued atmosphere surrounding England’s [ ... ]
cricket
Silverwood Over Kirsten Is The Right Choice For England's New...
England have confirmed the appointment of Chris Silverwood as their new head coach to Trevor Bayliss, [ ... ]
cricket
Why Ashes Win For Australia Could Be A Good Thing In Long Term...
It might well have been a headline from 2019. That famous obituary we all know so well, written [ ... ]
cricket
Five Things That Prove Steve Smith Ain't Perfect
Steve Smith. The best batsman in the world and seemingly impossible to get out from an English point [ ... ]
cricket
Manchester In The Rain: Five Things To Do When The Ashes Is...
Ah, Manchester. The proud home of The Sportsman is known throughout the world for its music, sport and [ ... ]
cricket
England’s Lion Heart Jack Leach Is Granted Free Glasses For...
Specsavers have made good on Ben Stokes’ request to grant Jack Leach free glasses for life after [ ... ]
cricket
The Ashes: Why Staging A Test Is Vital To County Hosts
In the run-up to the Ashes, the talk has been about pitches. To be precise, it’s been about poor [ ... ]
cricket
England vs Australia: Evolution Of The Ashes Rivalry
The Ashes is one of the oldest and most compelling competitions in sport. Cricket’s famous test [ ... ]