World number one Ashleigh Barty has emulated Australian legend Evonne Goolagong and won Wimbledon for the very first time after putting on a battling display to beat Karolina Pliskova 6-3, 6-7 (4-7), 6-3 in a thrilling final on Centre Court.

The Australian raced out of the blocks to give herself a 4-0 lead in the opening set and Pliskova looked as if the occasion may have got to her as she targeted her first Grand Slam title. However, Pliskova battled back in the first set, and carried her good form into the second as she made a real battle of the final.

She fought back having been broken early in the second, but then lost her way again as Barty served for the title. The Czech showed her resilience once again as she forced the set to a tie-break and then incredibly won it against the odds to the delight of the Wimbledon crowd. Given we were starved of Wimbledon action after last year's cancellation, this women’s singles final certainly made up for it - it was an absolute thriller.

In the third set Barty managed to show her class however as she bagged another early break, but this time, she was able to hold off Pliskova, despite some sensational shots from the eighth seed. She nearly missed this year’s Wimbledon with a hip injury this year, so despite the loss, she deserves huge credit after making it further than she ever has before at SW19.

“Thank you to everyone, I enjoyed every minute to play on this court, sorry,” she cried on court after the defeat. The crowd were behind her all the way and gave Pliskova an almighty cheer as she collected her runners-up trophy. 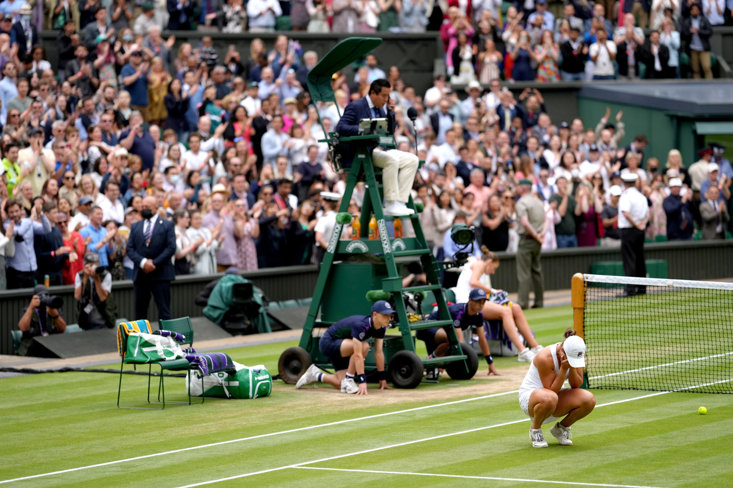 “I never cry, never ... I want to start with Ash, she played an incredible tournament and an incredible match today, it wasn’t easy to close the second set, I was fighting very hard to make it difficult for her, but I think she played very well, so congrats to her and her team.”

But Barty is the 2021 Wimbledon champion and wins on the 50th anniversary of Goolagong’s first win. It has been 41 years since Australia last had a women’s champion at Wimbledon but that long wait has finally come to an end as the finest tennis player on the planet secured the biggest prize of the lot.

It was 1am in Queensland when Barty hit that winning shot but they will party all night Down Under after a terrific display from their golden girl.

“This is incredible. I have to start with Kara - congratulations to you on a fantastic tournament, and to your team.  I love testing myself against you, and I’m sure we’ll play in many, many more matches. I genuinely have to thank every single person in this stadium, you have made my dream so special, so thank you so much."

This may have only been her first Wimbledon crown and her second Grand Slam title, but based on this showing, we could get used to seeing Barty lift silverware on a more regular basis over the coming years. Somewhere, the great Goolagong has a ginormous smile upon her face.

x
Suggested Searches:
Manchester United
Liverpool
Manchester City
Marcus Rashford
Premier League
More
tennis
Novak Djokovic Is Right, It's Time To Get Serious About Player...
The judgement on player welfare has often been clouded by the amount of money these sporting superstars [ ... ]
tennis
20 Times A Champion - But Why Is Novak Djokovic Not Loved Like...
Novak Djokovic’s 20th Grand Slam title at Wimbledon on Sunday saw him go level with tennis’ [ ... ]
tennis
Djokovic Makes History With 20th Grand Slam Men's Singles Title...
Novak Djokovic has won his 20th Grand Slam singles title – equalling the men’s record held [ ... ]
tennis
Italy Eye Up Super Sunday As Berrettini Faces Djokovic In Wimbledon...
It could be a very special Sunday for Italy as their men face England in the Euro 2020 final and now [ ... ]
tennis
Wimbledon Men's Semi-Finals: Can Anyone Stop Novak Djokovic...
The men’s Wimbledon semi-finalists were confirmed on Wednesday after some intense quarter-final [ ... ]
tennis
Ashleigh Barty To Take On Karolina Pliskova In Women's Wimbledon...
World number one Ashleigh Barty will play Czech eighth seed Karolina Pliskova in Saturday's Wimbledon [ ... ]
tennis
Wimbledon Great Roger Federer Hints At Retirement, But What...
Wednesday may have marked the end of an era. The great Roger Federer hinted that his quarter-final defeat [ ... ]
tennis
Wimbledon Women's Semi-Finals: Barty The One To Beat As Sabalenka...
The women’s Wimbledon semi-finalists were confirmed on Tuesday after a brutal round of quarter-final [ ... ]
tennis
Canadians Auger-Aliassime And Shapovalov Out To Make History...
Wimbledon is loved for its rich history and we get to witness another piece of it as the quarter-finals [ ... ]
tennis
The Pressure Is On World Number One Ashleigh Barty Ahead Of...
The women’s world number one Ashleigh Barty has so far justified her ranking at Wimbledon as she [ ... ]
tennis
Coco Gauff Won’t Be Fazed When She Takes On Former Wimbledon...
As we enter the second week of Wimbledon and into the round of 16, a lot of eyes will be on young Coco [ ... ]
tennis
He's Not The Same Andy Murray, But There Might Be Plenty More...
It was a bittersweet Wimbledon return for Andy Murray after four years away from the men's singles as [ ... ]
tennis
'Unbreakable' Emma Raducanu Could Be The Future Of British Tennis
On the week of 13 October 2002, Westlife’s ‘Unbreakable’ hit the top of the UK singles [ ... ]
tennis
As Serena Exits Wimbledon, Have Her Hopes Of A 24th Grand Slam...
It wasn’t supposed to end this way. When Serena Williams beat her sister Venus in straight sets [ ... ]
tennis
Andy Murray Laughs Off Retirement Talk After Comeback Wimbledon...
Andy Murray was a slight betting underdog when he took to centre court for the first time in four years [ ... ]
tennis
World Number One Djokovic Is The Perfect Lesson For Promising...
Young Briton Jack Draper faces world number one Novak Djokovic on Centre Court at Wimbledon on Day One [ ... ]
tennis
16 Years After His Wimbledon Debut, This Summer Could Be Andy...
It’s summer 2005. The sun is shining, Wimbledon’s grass courts are greener than ever, the [ ... ]
tennis
Wimbledon Is Back - But How Will It Look This Year?
Wimbledon is back this summer after a forced absence last year, although things are set to look a little [ ... ]
tennis
The Tennis Stars To Look Out For At SW19 As Wimbledon Qualifying...
As the Wimbledon qualifiers get underway today there will be some unfamiliar faces who will be looking [ ... ]
tennis
The British Tennis Superstars Ready To Light Up The Court At...
We are deep into June and that can only mean one thing, Wimbledon is just around the corner and the [ ... ]
tennis
With Nadal Out And Federer Struggling, Who Can Stop Novak Djokovic...
Novak Djokovic will continue his bid to become the first male player in history to win the ‘Golden [ ... ]
tennis
Ignore The Andy Murray Comparisons, Jack Draper Is Forging His...
Jack Draper is going to face an awful lot of premature Andy Murray comparisons. He’s British, [ ... ]
tennis
Why Novak Djokovic Is Already The Greatest Male Tennis Player...
It’s time to start talking about Novak Djokovic as the greatest male tennis player of all time. [ ... ]
tennis
Djokovic Sends Nadal To Third Loss In 108 French Open Matches...
Rafael Nadal succumbed to only his third-ever defeat at the French Open on Friday evening at the hands [ ... ]
tennis
Who Are The Female Semi-Finalists In The Women's French Open?
A Russian, a Slovakian, a Czech and a Greek walk into the French Open semi-finals. We are now down to [ ... ]
tennis
Alfie Hewett And Gordon Reid Are Britain's Dominant Duo To Be...
Ant and Dec, Morecambe and Wise, Torvill and Dean. Now Britain has another remarkable pairing to [ ... ]
tennis
Is Serena Williams Finally About To Equal Grand Slam Record...
It has been more than four years since Serena Williams won the last of her 23 Grand Slam titles back [ ... ]
tennis
Coco Gauff's Maturity Is Admirable As She Targets French Open...
At the age of 15 years and 3 months old, Coco Gauff burst onto the scene in 2019 as the youngest player [ ... ]
tennis
Lessons Must Be Learned Across The Whole Of Sport Over Naomi...
Following Naomi Osaka’s decision to withdraw after the first round of the French Open, the authorities [ ... ]
tennis
A Compromise Must Be Found As Naomi Osaka Fined $15,000 For...
Following her excellent first round display at Roland Garros, Naomi Osaka is being threatened with expulsion [ ... ]