Ashley Hugill has come a long way from cleaning out chicken coops to playing at the Crucible.

The 27-year-old from York makes his debut at the Betfred World Championship on Monday against title favourite and player of the season Neil Robertson.

World No77 Hugill also salvaged his place on tour with three crucial wins in qualifying to earn his spot in the line-up at the iconic Sheffield theatre.

But he admits that working for his dad’s business mopping up poultry mess made him considerably more determined to succeed in snooker.

Hugill, who fluked a black against Leicester’s Joe O’Connor to qualify, said: “I used to work part-time for my dad when I left school. He has always supported me.

“He has a business cleaning poultry houses, doing the sheds when they leave. I have done that job, and at one point I asked to go and do a few weeks to re-ground myself.

“It made me think ‘Right, I don’t want to be cleaning up chicken muck for the next 40 years’. And I am proud of what I have achieved since.

“But my parents have been a huge support in so many ways and there is no way that I would be in this position now without all their help.

“When I was a junior I was so far behind the level needed, and if it wasn’t for my mum and dad supporting me to go full-time after I left school there was no way could have caught up.

“But I have never been a quitter. This has been four years in the making for me, getting to the Crucible – four years on the tour, four years of getting beat all the time and never giving up.

“And now I have achieved something. The venue is great, but it is more about the history of the place for me and I would love to write my own little chapter.

“Being based in Sheffield I am very comfortable in the city – even during the qualifiers I was nipping home between sessions for a shower, getting changed and a bite to eat.

“It will be a big occasion against Neil and I am really looking forward to it.” 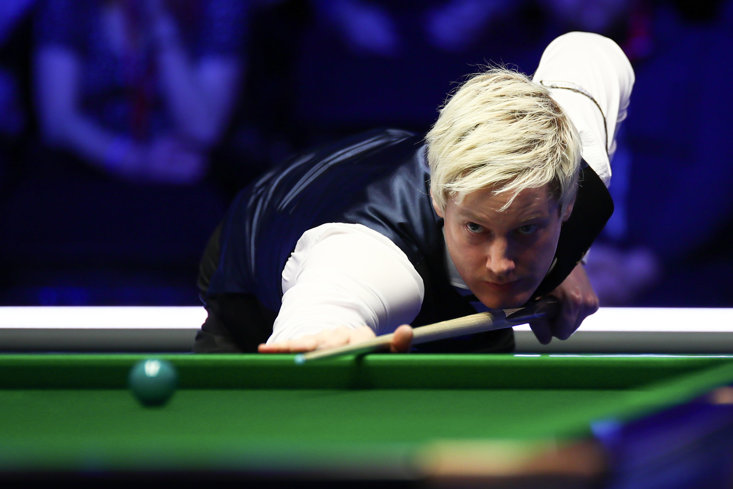 Even before he came past O’Connor in the final qualifier to get to the Crucible, Hugill had survived a scare against Martin Gould in the previous round.

He added: “I was confident before the qualifiers but then before the match against Martin Gould I had food poisoning and I was sick the night before.

“I was on the toilet all night, and I was also fighting for my tour card too. So I didn’t really expect anything because I felt so bad, I only did 10 minutes practice, and that took the pressure off.

“When I eventually qualified, it was just sheer relief to have made it. Against Joe I just told myself a thousand times that I was not going to lose the game.

“I was glad to avoid Yan Bingtao and Zhao Xintong in the draw, because I practice with them all the time.

“It means so much to get there to play, and I will try really hard to soak it all in. I have been to watch maybe three times, I am from York but now based in Sheffield at Victoria’s Academy.

“I think there will be a few family and friends trying to come along with them being not far away, and I am likely to be struggling for tickets.”

If Hugill could be more of an unknown quantity to the wider sporting public outside the snooker bubble, the same can certainly not be said of his far more illustrious opponent.

Australia’s Robertson has been a serial winner for years, even if his record elsewhere is not reflected in his performances at the Crucible.

The world No3 won this title back in 2010, but given all his other exploits the failure to double up remains something of a mystery.

Robertson, based in Cambridge, believes the cramped nature of the arena in the early rounds, with the dividing wall restricting the space available, has done him few favours.

As a tall man he has felt cramped both at the side of the table, and in the corner holding the players' seats and tables.

But if the 40-year-old originally from Melbourne is to do himself justice on snooker’s biggest stage – and he has only reached one semi-final since that success – he must somehow crack the code.

One thing is for sure. Having won the Masters, the Tour Championship, the Players Championship and the English Open, he has never arrived in Sheffield in better form.