Those lamenting the end of the football season across the major leagues across the continent - with most title-chases sewn up - may do well to remember there is still a haul of silverware still on the table.

Not only are we privileged to an all-English Champions League final to christen June, and a host of promotion and relegation play-offs, Italy brings us the culmination of the Coppa Italia, notably the first time it hasn’t featured - or indeed been won by - Juventus in five seasons.

The Old Lady have paired the cup competition with the Serie A title in each campaign since the 2014/15 season and whilst another Scudetto with manager Massimiliano Allegri has been forthcoming (his fifth and the club’s eighth in succession), Juve had to suffer the unusual disappointment of being dumped out of the tournament in the Quarter-Finals at the end of January to one of this year’s finalists, the remarkable Atalanta set-up wielded by Gian Piero Gasperini.

La Dea have reached the final of the Coppa Italia for the first time since the 1995/96 season, where they finished runners up to a Gabriel Bastituta-led Fiorentina, but wreaked revenge by the narrowest of margins this year in a 5-4 two-legged semi-final, the first leg climaxing in a scintillating 3-3 draw in Florence.

Fiorentina, coincidentally, were one of two of the last teams to make an appearance in a Juve-less final, losing to Rafa Benitez’ Napoli in the 2013/14 season, the second of two Partenopei victories in three years. Intersected between the two was the last triumph for the other of the two teams to walk out at the Stadio Olimpico on June 15, Lazio.

The Biancocelesti have had a good punt at lifting the trophy since that frenzied victory over fierce rivals Roma in 2013, reaching the final at that home stadium in the capital a further two times only to be defeated by an unmerciful Allegri Juventus. In the past decade, Lazio have reached a final in an odd-numbered year bar 2011.

Simone Inzaghi’s side will have a tough ask against an Atalanta side who have excelled this season, currently find themselves in a Champions League qualification spot, pushing for third, and experiencing an unbeaten run stretching across 11 league games, striking the longest current streak in Serie A and they own personal 16-year-record. Atalanta’s Duván Zapata currently bests one Cristiano Ronaldo in the league’s goalscoring charts, the Colombian forward boasting three in the Coppa to boot. He scored as Lazio suffered a 3-1 home defeat at the hands of Atalanta at the beginning of May.

Atalanta, however, have just one Coppa Italia that they can claim, and that coming all the way back in the 16th edition of the competition, with a 3-1 victory over Torino in June 1963; the success so far back it marginally preceded The Beatles’ “She Loves You” and took place five months before JFK was assassinated.

Will this barren streak - which has seen sporadic interludes in Serie B - conclude this week, with triumph for Gasperini’s side?

Atalanta versus Lazio takes place at the Stadio Olimpico, Rome, at 19:45 (GMT). 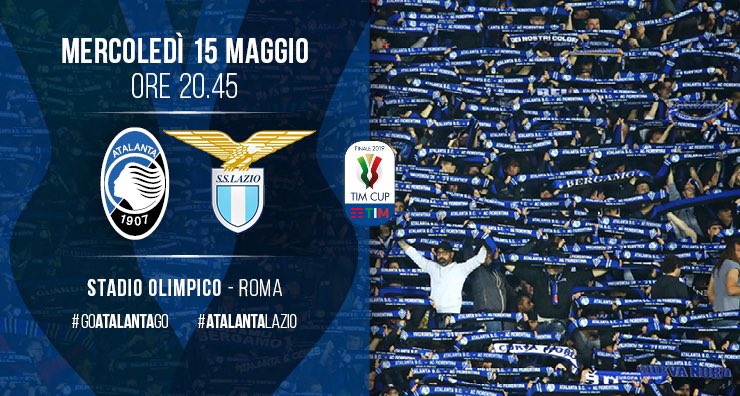