Football
News
Diego Simone's side head to Stamford Bridge in the Champions League on the back of some patchy form
Elliott Bretland
17:00, 16 Mar 2021

Atletico Madrid have had Barcelona and Real chasing them all season. They were unbeaten domestically until December 12 and had won 19 matches in all competitions between the start of the season and January 31. It’s near impossible to score past Diego Simeone’s team and with the best defence in Spain, it looked like they were set for their first La Liga title since 2014 and only their third since 1977.

However, since February, Atletico’s form has been patchy and they are just four points clear of Lionel Messi’s Barca and six ahead of city rivals Real, the team who inflicted their first league defeat of the season and rescued a point through a late Karim Benzema equaliser in the reverse.

On Wednesday, they head to Stamford Bridge looking to overturn a 1-0 deficit against Chelsea in the last 16 of the Champions League. Since Thomas Tuchel took charge in west London, the Blues have conceded just twice in twelve matches meaning Luis Suarez and Co have a massive job on their hands. Especially when you consider they fired a blank at Getafe on Saturday and still couldn’t score when the home side went down to ten men after former West Brom defender Allan Nyom was sent off. 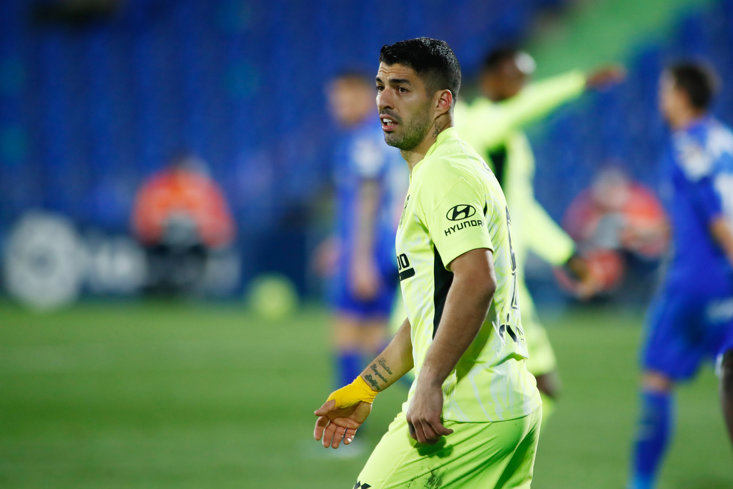 Three wins, four draws and a defeat is not championship winning form but that is all Atletico have mustered in the last month-and-a-half. In that time, they took a solitary point in two fixtures against ninth-placed Levante and need to arrest this stuttering form.

Looking at Atletico’s starting line-up week to week is reminiscent of football in the Eighties in the sense it is the same players every game bar a deputy here and there filling in for suspension or injury. Only 12 players in Simeone’s 23-man squad have made more than 20 appearances this season and that’s including cameos off the bench. It’s little wonder they have hit a difficult spot considering the rigours of modern football. As well, this isn’t a young side. Luis Suarez turned 34 in January. Centre-back pairing Felipe and Stefan Savic are 31 and 30 respectively. Koke is 30. Kieran Tripper is 29.

Striker Suarez has 18 goals and is vital to the team, but others are not chipping in with enough. Marcos Llorente has nine and Joao Felix has seven, though Diego Costa is fifth in that list with two strikes before having his contract mutually terminated at the end of 2020.

Usually so solid, Atletico were a brick wall earlier in the season and goalkeeper Jan Oblak, arguably the best on the planet, has kept 13 clean sheets but lately Simeone’s backline have looked susceptible at set-pieces.

"There needs to be more calmness," Simeone has said with eleven games remaining. "We need to keep moving forward and not let anxiety enter our minds."

Next up for Atletico, after Chelsea, is Alaves at home on Sunday before two trips to Seville to face Sevilla and Real Betis. Barcelona and Real will be waiting to pounce on any errors.

If the Catalan giants managed to turn their season around to clinch the title after a slow and troubled start under Ronald Koeman, one assumes it would be a massive boost in keeping Lionel Messi at the Nou Camp this summer. For Real Madrid too, a title triumph would certainly aid their summer recruitment with Kylian Mbappe, a name heavily linked.

The La Liga title race is still in Atletico’s hands but the finish line is much further away than they’d like. They are being chased and there is no room for error.