Evander Holyfield is no stranger to unedifying ends to a career. ‘The Real Deal’ has reached seemingly natural conclusions before. After Riddick Bowe knocked him out in the rubber match of their legendary trilogy, Holyfield made a mockery of those claiming he was finished by stopping Mike Tyson two fights later. The calls got louder when he emerged from a controversial three-quel with John Ruiz without his WBA championship. They reached fever pitch as first Chris Byrd, then James Toney and finally Larry Donald pounded him in consecutive defeats.

At 42 years of age, this felt like the end. Nine fights would follow, with seven wins as Holyfield and his fans conned themselves into thinking the flame had not burned out. Those seven wins came largely against fighters more shopworn than he was, and the two losses came in world title fights, proving that Holyfield was no longer a force at championship level. Holyfield retired on a win, against a past-it Brian Nielson in 2011, and that appeared to be that. Until last night, when the 58-year-old ring great was knocked out by former UFC star Vitor Belfort in the headline attraction of Triller’s latest twisted variant on the fight game.

Evander Holyfield agreed to fight the 44-year-old MMA standout on eight days notice, when Oscar De La Hoya withdrew after contracting COVID-19. There was conjecture during the week, as nobody was clear whether Holyfield’s comeback would be a sanctioned bout or an exhibition. It was fought as an exhibition, but this was not the glorified sparring that Mike Tyson and Roy Jones Jr. treated us to last November. Far from the atmosphere of that surprisingly uplifting evening, this was grimly uncomfortable to watch. 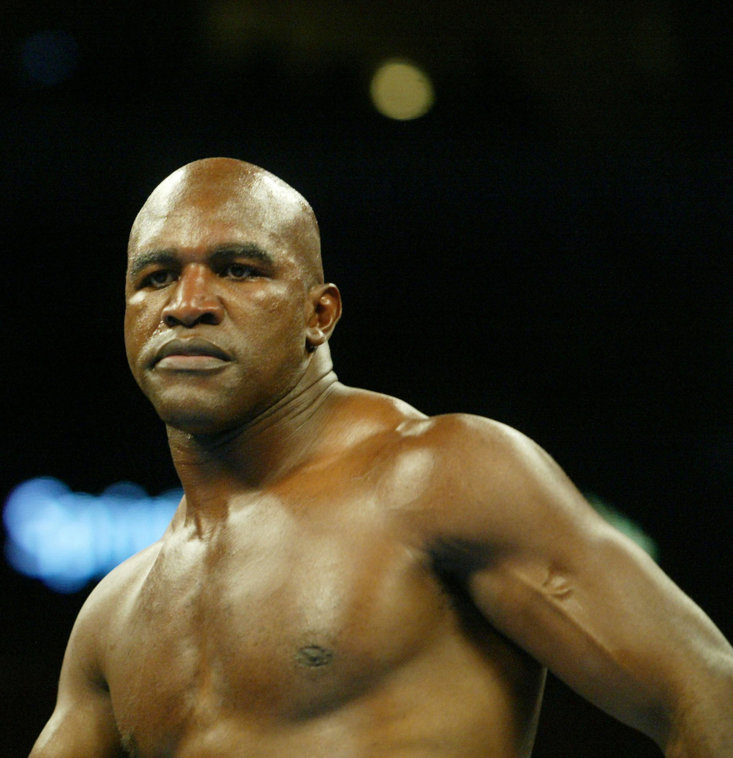 Holyfield missed with every punch he threw, was staggered by an innocuous-looking body shot, and fell through the ropes after a mistimed left hook. Just a minute in, it was clear that allowing Evander Holyfield into a boxing ring in 2021 is cruel and exploitative. This was just leeching from the name of a fighter who gave us more than enough in his career. In fact, he’d given us more than enough 20 years ago. The only mercy here was the brevity of this horror show. Holyfield was knocked down by an untidy flurry of Belfort punches, and while he did rise, he was soon stopped by a further barrage of shots.

Holyfield claimed the stoppage was early. It was not. Holyfield refused to rule out an exhibition with Tyson. He should. The former undisputed champion should never be allowed to fight again. It is frightening that in an era where name value and modified rules allow almost anyone to have their turn in the squared circle, celebrities and old pros alike, we may not have seen the last of Holyfield in a prize ring. 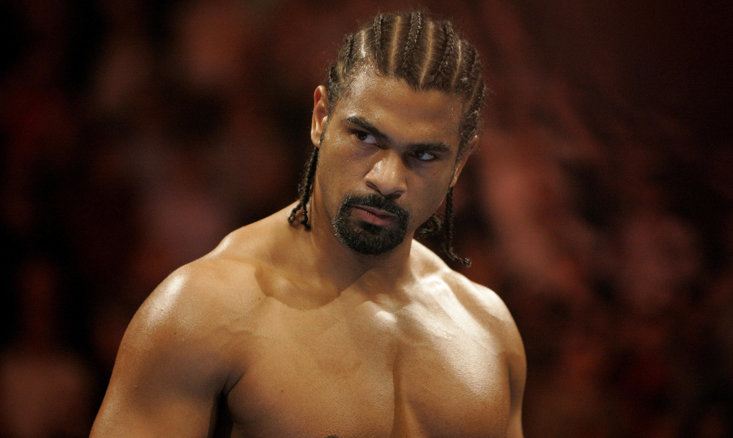 The rest of the card did little to redeem this odious pay-per-view. This funhouse mirror distortion of the sport was merely solidified in the preliminary fights. David Haye promised a knockout when he took on his billionaire holiday pal Joe Fournier. Instead, he entered into a glorified spar with his friend, going to a points decision against a 9-0 part-time fighter who had never fought above cruiserweight. Haye knocked Fournier down once, but allowed his chum to see the final bell in this exhibition scrap. ‘Hayemaker’ called out Tyson Fury afterwards, a laughable proposition to anyone who saw the Bermondsey puncher lose twice to Tony Bellew a few years back.

The battle of the UFC legends was settled quickly and decisively, as Anderson Silva crushed Tito Ortiz via first-round knockout. Silva defeated former world title challenger Julio Cesar Chavez Jr. in his last bout, while Ortiz was making his pugilistic debut. ‘The Spider’ appears to have a knack for these freakish pseudo-fights, but his opponent would do well to leave combat sports behind at the age of 46. Instead, Ortiz quickly called out Logan Paul on Twitter.

x
Suggested Searches:
Manchester United
Liverpool
Manchester City
Marcus Rashford
Premier League
More
boxing
Anthony Joshua Weighs In 19lbs Heavier Than Usyk Ahead Of Heavyweight...
Anthony Joshua has weighed in at 240lbs ahead of his heavyweight showdown with Oleksandr Usyk this weekend, [ ... ]
boxing
Okolie Is The Latest In A Proud Line Of British Cruiserweight...
Anthony Joshua will not be the only British world champion stepping into the ring at the Tottenham Hotspur [ ... ]
boxing
Anthony Joshua vs Oleksandr Usyk Is Fight Of The Year, Says...
Ahead of Oleksandr Usyk’s heavyweight showdown with Anthony Joshua at the Tottenham Hotspur Stadium, [ ... ]
boxing
From Mike Tyson To Mr. Dream, How Punch-Out!! Defined Boxing...
Only 55 men truly know what it is like to face ‘Iron’ Mike Tyson. But a generation of gamers [ ... ]
boxing
Anthony Joshua Treating Oleksandr Usyk Fight Like Just Another...
Anyone expecting fireworks akin to Canelo and Caleb Plant’s presser might have been left disappointed [ ... ]
boxing
Six Of The Best: Famous Boxing Father And Son Duos
Campbell Hatton faces Sonni Martinez this weekend in his fourth professional fight. While the Manchester [ ... ]
boxing
A Usyk Win Could Derail AJ-Fury, But Bring Us An Undisputed...
When the dust settles and Anthony Joshua vs Oleksandr Usyk is in the record books, fans and media alike [ ... ]
boxing
Eubank And Watson Made History That Should Never Be Repeated
Every boxing match is a roll of the dice. Fans demand ferocity and violence. They roll the dice and [ ... ]
boxing
Next Best Thing: Why Usyk Is The Best Opponent AJ Could Have...
Anthony Joshua steps into the ring with Oleksandr Usyk on Saturday, defending his WBA, WBO and IBF world [ ... ]
boxing
Start Time? Undercard? How To Watch? Everything You Need to...
Anthony Joshua’s IBF, WBA and WBO belts will all be on the line this weekend when he takes on [ ... ]
boxing
Dillian Whyte To Fight Otto Wallin, Five Boxing Stories You...
Dillian Whyte could face a tough heavyweight test in October, Jake Paul is helping to make a women’s [ ... ]
boxing
Bridge Over The River Why?: WBC Confirms First Bridgerweight...
Boxing has a new world championship in a brand new weight class, as Oscar Rivas and Bryant Jennings [ ... ]
boxing
Crawford vs Porter: Top Welter Scrap Can Cure Boxing Of Its...
WBO welterweight champion Terence Crawford will meet former two-time belt-holder Shawn Porter on 20th [ ... ]
boxing
Tales From The Crypto: Amir Khan Fronts Bizarre Finance Influencer...
You have seen your favourite YouTubers knock out basketball players. You have seen MMA fighters destroy [ ... ]
boxing
Tyson Fury Shares Career Bucket List, Five Boxing Stories You...
Tyson Fury has mapped out his ideal boxing bucket list, Donald Trump is back and Billy Joe Saunders [ ... ]
boxing
Anthony Joshua's Ferocious Punching Power The Key Against Usyk,...
There’s a little over a fortnight to go until the showdown between WBA, IBF, WBO, and IBO heavyweight [ ... ]
boxing
First Line Of Defence: When The Best Brits Put Their Belts On...
Sunny Edwards was set to defend his IBF Flyweight championship against Jayson Mama on Saturday at the [ ... ]
boxing
When They Were Kings: Triller’s Old Guard Have Seen Better Days
Propped up by a mixture of celebrities, retired fighters, influencers and the odd rising boxer, Triller [ ... ]
boxing
When Wladimir Klitschko And ‘The Next Tyson’ Saved The Heavyweight...
Former WBC heavyweight champion ‘The Nigerian Nightmare’ Samuel Peter turns 41 today. Despite [ ... ]
boxing
Oscar Valdez Fighting After Positive Drugs Test Casts Boxing...
WBC super featherweight champion Oscar Valdez has tested positive for the banned substance phentermine [ ... ]
boxing
Lara Slice Puts Warrington Redemption On Ice
Josh Warrington stormed into Headingley to the strains of ‘I Predict A Riot’, but not even [ ... ]
boxing
Triumphant Taylor And Heroic Hughes Highlight Warrington vs...
There is no question that Josh Warrington drew the large and vocal crowd to Headingley, to watch him [ ... ]
boxing
Influencers Need Not Apply: Fury, Joshua and Canelo Lead Boxing’s...
Last weekend, Jake Paul “treated” us to the latest chapter in his boxing odyssey. Next Saturday, [ ... ]
boxing
Josh Warrington Admits Pressure Is On As He Seeks Revenge Against...
Josh Warrington is gearing up for a shot at revenge on Saturday night when he takes on Mauricio Lara [ ... ]
boxing
Undisputed vs Undisputed: A Future Fight Between Serrano And...
Among the YouTubers and gross mismatches on show in Cleveland, Ohio on the Jake Paul vs Tyron Woodley [ ... ]
boxing
A Night At The Circus: Paul Squeaks Past Woodley As Tommy Fury...
Jake Paul moved to 4-0 (3 KOs) last night with a split decision victory over former UFC champion Tyron [ ... ]
boxing
Angelo Dundee: Three Masterpieces From Boxing’s Greatest Trainer
Perhaps the greatest cornerman of all-time, Angelo Dundee guided the careers of sixteen world champions [ ... ]
boxing
Okolie Makes First WBO Defence On Stacked AJ/Usyk Undercard
Lawrence Okolie makes the first defence of his WBO World Cruiserweight Championship as part of a strong [ ... ]
boxing
Pacquiao Eyeing Up Ugas Rematch, Five Boxing Stories You Might...
It might not be the end of Manny Pacquiao’s legendary career just yet, YouTuber Jake Paul is comparing [ ... ]
boxing
Jake Paul vs Tyron Woodley Headlines Intriguing Card That Could...
The circus rolls on as internet personality Jake Paul treats us to his latest professional boxing extravaganza, [ ... ]