Just a day after Zlatan Ibrahimovic struck his 500th club goal in Milan, an Englishman in the Premier League was hitting his own personal milestone. Patrick Bamford found the net for the 100th time in his career as Leeds United beat Crystal Palace 2-0 on Monday night and the fact it came against one of his former clubs will make it feel even sweeter.

Bamford has had his fair share of critics in the past. Even as Leeds were flying at the top of the Championship, some sections of the support were concerned that his lack of a clinical edge could scupper their chance of a return to the big time after 16 years away. If he scuffs a chance some felt was easier to score, you’ll always have some critics circling in, wholly focusing on the miss and disregarding the work he put in during the other 89 minutes of the match.

Having started at Chelsea, Bamford, now 27, went out on loan six times. He impressed at MK Dons and Middlesbrough but failed to score in his last three temporary moves at Selhurst Park, Burnley and Norwich. Stats like those just add fuel to the fire, but he has emphatically poured cold water over any doubts this season.

On Monday, he curled one effort well off target but was clinically cool soon after, passing the ball into the net after Raphinha’s initial effort was saved. It marked a century of goals in his career and 12 overall this campaign. 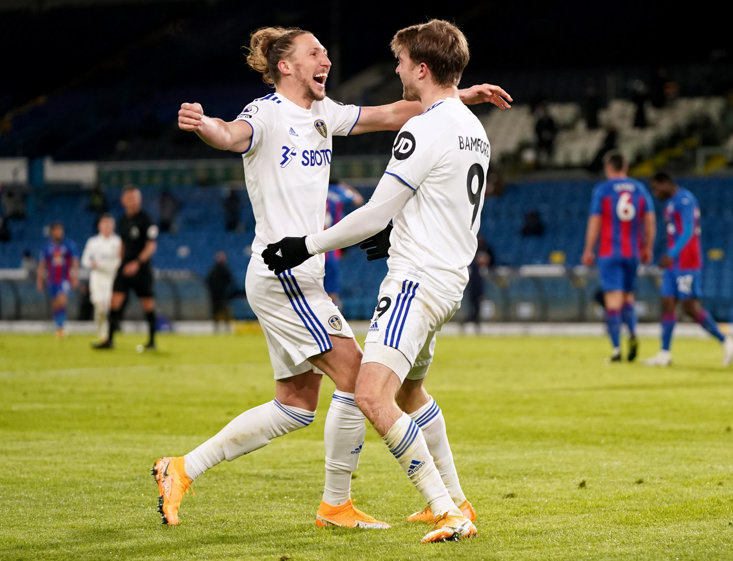 It was his hat-trick at Aston Villa in October which really caught the eye. Bamford’s second strike got the sort of swerve on the ball only Cristiano Ronaldo can usually muster as it found the top of the net almost like a flyaway. Ridiculous. The third, too, was stunning, jinking in and out of the home side’s defence with a shimmy here and instep there before he curled the ball home. His goals at Chelsea, Leicester and Sheffield United also make the highlights reel.

Feeling in good form recently, Bamford has boldly selected himself in his Fantasy Football team and admitted after the Palace win: “I captained myself! After I missed that one in the first half, I was kicking myself so I’m glad I scored.

And he added that inspiration another sport had helped him hit the 100-mark. After all, it is Six Nations season.

“It’s important to make your home ground a fortress but it’s difficult with our pitch at the moment. We almost suit playing away. It’s better [than it was]. It’s hard to stand up, that’s all I’ll say! I’m still wearing studs, but I had to basically put rugby studs in at half-time!”

Dealing with difficult conditions, he’s handled his critics well too. So, the only question that remains is should he now be rewarded with an England cap?

Harry Kane and Marcus Rashford’s places at the Euros this summer are secured. though Everton striker Dominic Calvert-Lewin put himself in contention for an England call-up by netting for fun at the start of the season. Meanwhile, Southampton marksman Danny Ings is a man on fire too. Is there room for Bamford?

Former Leeds striker Jimmy Floyd Hasselbaink told the Premier League on Monday: “[Marcelo] Bielsa loves him because of the work rate that he brings. His movement, he’s always available.”

If Gareth Southgate is looking for an attacker who puts in a shift for the team but also has an eye for goal, Bamford is most certainly an option.

Ensuring Leeds finish as high up the Premier League table as possible will be Bamford’s prime concern following their return from the Championship. But if he continues to bang in the goals in the process, he has to be part of the England conversation.