There could have been no more fitting venue for Barry Hearn to announce his retirement after 40 years as the UK’s leading sports promoter.

The chairman of the Matchroom Sport empire this morning (Tuesday) called time on an astonishing career at the Crucible Theatre in Sheffield, home of snooker’s ongoing Betfred World Championship.

He was also owner and chairman of Leyton Orient Football Club for almost 20 years from 1995 to 2014.

But Hearn always refers to snooker as his first love. He bought and then ran the Lucania chain of snooker clubs in 1974, and considers the day lanky teenager Steve Davis walked into the Romford one in 1976 as a ‘Sliding Doors’ moment for both of them.

Davis won his first world title exactly 40 years ago in 1981, an occasion qualified accountant Hearn – a sports nut who quickly realised his destiny was to promote rather than play - fondly recalls as his favourite moment.

Though having managed many of the leading players including Ronnie O’Sullivan, he still picks that moment as “the day two guys from council estates in Dagenham and Plumstead conquered the world”.

The iconic images of the promoter losing all restraint, running down from his seat and almost rugby-tackling a stunned Davis in the arena at the moment of triumph have endured for four decades.

Almost as big a breakthrough moment for Hearn came in boxing, and Chris Eubank’s victory in the first fight against Nigel Benn in November 1990 to take his rival’s WBO middleweight world title.

Hearn, awarded an OBE in the last Honours list, admitted he had “staked everything” on the eccentric Brighton fighter against Benn, and the gamble paid off handsomely as the move into a sport he had followed avidly from childhood became a success up against the established order.

And after the acrimonious darts split of 1994, Hearn’s new PDC organisation weathered the initial storm to become the accepted gold standard in the arrows game, with Phil Taylor – like Davis also managed by Hearn – the talisman for the sport. 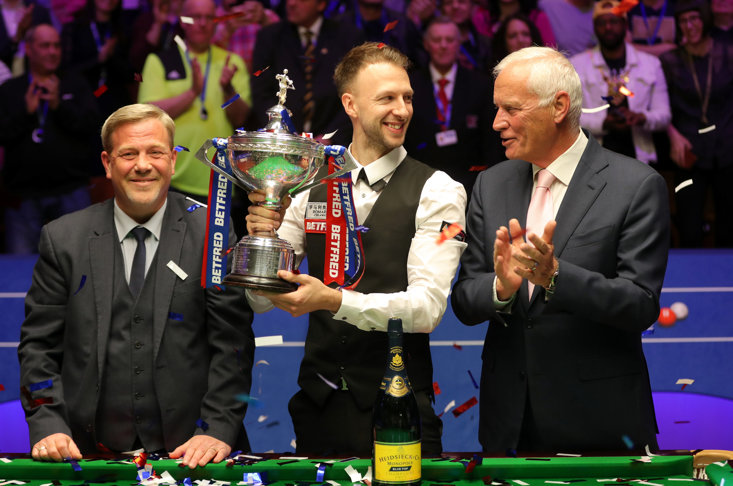 Hearn alongside Judd Trump after winning the 2019 Betfred World Championship

But the baton in a family concern now passes to son Eddie, already a huge player in the boxing world with world heavyweight champion Anthony Joshua his ace in the pack and mega-fights against Tyson Fury looming - with daughter Katie heading up the media side of the business.

Through two heart attacks, near bankruptcy in the 1990s as Hearn placed all his chips on satellite channel Sky taking off, and then contracting Covid-19 last year, his prodigious work ethic has been maintained to the last, and you suspect even beyond in a new ‘El Presidente’ role.

And the growth of Matchroom, based in Brentwood, saw Hearn’s wealth estimated at £158million in the 2020 edition of the Sunday Times Rich List.

Hearn might easily have made the move to step away a year ago, but with his activities like so many seriously hampered by the coronavirus pandemic a desire to see things through the worst of the storm stayed his hand. A 40th anniversary of Davis’s first title is also a neat sign-off.

A man consumed with providing entertainment once said, “I realised quite early I wasn’t a genius. I was smart without being super smart, academically smart, but I had a work ethic, and I never wasted a moment of my life.

“That put me in an unassailable position because no one could compete with me because of my relentless approach.”

It was heart over head that lured him back to snooker, a sport in crisis, in 2010. Keeping events going and players earning during the pandemic, in constant dialogue with government and acting as a pioneer on testing protocols, may just have been his greatest achievement.

And Matchroom has grown to such an extent that you would not rule out it being taken public at some point in the future.

Perhaps it is that idea of possibly having to answer to just too many other people for one of life’s ‘benevolent dictators’, as well as protecting his health and simply enjoying retirement, that have finally persuaded Hearn to step aside. 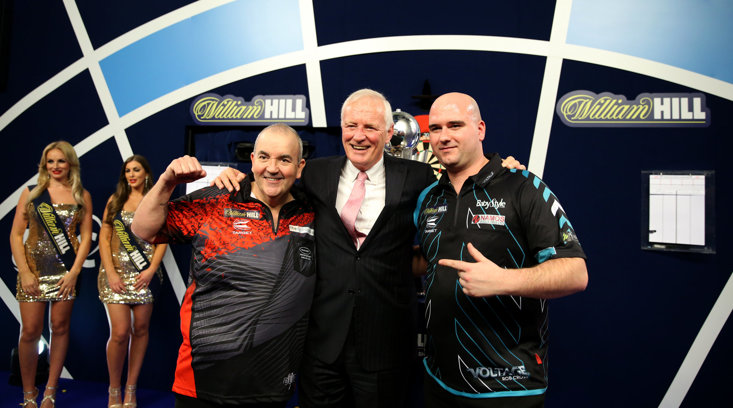 Hearn said this morning, “It has been a huge honour to have worked with some of the greatest sportspeople on the planet across the last 40 years, from snooker’s glory days of the 1980s to record-breaking boxing shows and the incredible growth of professional darts.

“Great challenges have been met, but none more so than the Covid pandemic. I have been determined to stay in charge until this disaster passed and now there is light at the end of the tunnel.

“And I believe it is the right time to pass control of Matchroom to my son Eddie and the brilliant teams we have assembled.”

Eddie Hearn said, “Matchroom has a legacy that spans 40 years from a small office under a snooker hall in Romford to a global powerhouse of sports entertainment.

“My father has dedicated his life to the company and since I joined in 2004 I have done the same. Now a greater responsibility falls on my shoulders and I am very proud to continue his great work.”