Boxing
News
Here’s everything you need to know ahead of a blockbuster night of action in London
Kieran Spratt
06:55, 22 Mar 2022

There’s a tasty ‘Battle Of Britain’ taking place at Wembley this weekend with Richard Riakporhe taking on Deion Jumah in a potential cruiserweight classic.

Somebody’s ‘0’ has to go when the unbeaten fighters collide, with Riakporhe looking towards a world title shot and Jumah looking for a breakout win in a division utterly stacked with talent.

Elsewhere on a bumper card, Caroline Dubois makes her second professional appearance and Dan Azeez takes on Matthew Tinker for the British Light heavyweight title. Here’s everything you need to know ahead of a blockbuster night of action in the capital. 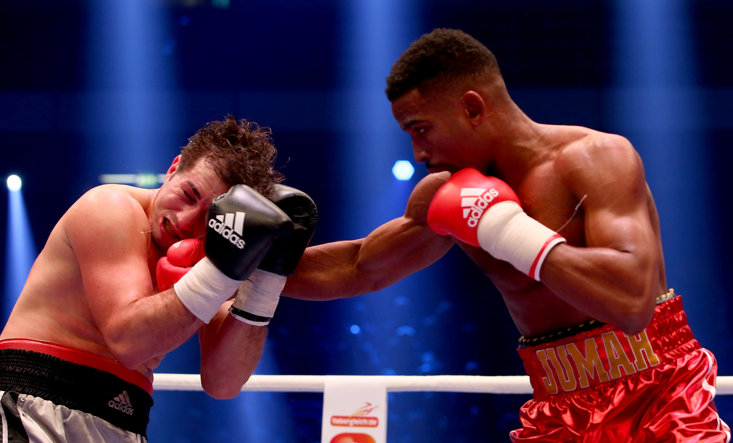 ‘The Ghost’ fought earlier this year, earning a points win over four rounds against Namibia’s Willbeforce Shihepo in February.

Riakporhe on training alongside Anthony Joshua:

"It's been absolutely amazing. You have AJ in the camp, I get a lot of advice. He's spoken to me about things that he's been through and things that I have to watch out for.

"Seeing him and what he's achieved, having him around me, it's more motivational for me as well.

"We want to achieve at least half of what he's achieved and that keeps the hunger and energy, and he kind of feeds back off that at the same time because he sees us on the way up, and remembers those days when he was coming up, so wants to step up his game." [Sky Sports]