Steve Beaton upset the majority of the fans in attendance at Alexandra Palace on Sunday night as he sent crowd favourite Fallon Sherrock packing from the PDC World Darts Championships at the first-round stage.

Sherrock had made history in the 2020 event by becoming the first woman to beat a male player at the World Championships, eventually reaching the third round. But she was beaten by a superb performance from Beaton on Sunday in the night’s big-ticket match-up.

Sherrock came out of the blocks flying, registering the first two legs and hitting 180s with ease, but Beaton fought back brilliantly to win the first set 3-2 as he started to really get into his rhythm.

In the second it was Sherrock who got ahead first again, wrapping up the first leg in 11 darts before Beaton responded in 13. Sherrock held serve with a 15-dart finish but Beaton hit back in 12 as he maintained a stunningly high three-dart average of 106. It wasn’t enough to win him the set though, as a missed bullseye allowed Sherrock back in and she took the chance to finish on double top to level the match.

PDC Darts
@OfficialPDC
𝗕𝗲𝗮𝘁𝗼𝗻 𝗲𝗻𝗱𝘀 𝘁𝗵𝗲 𝗦𝗵𝗲𝗿𝗿𝗼𝗰𝗸 𝘀𝘁𝗼𝗿𝘆!
No repetition of history this year at Alexandra Palace as Steve Beaton puts in a superb performance to beat Fallon Sherrock in an epic match!
Pushed all the way but Beaton used all his experience to get through! 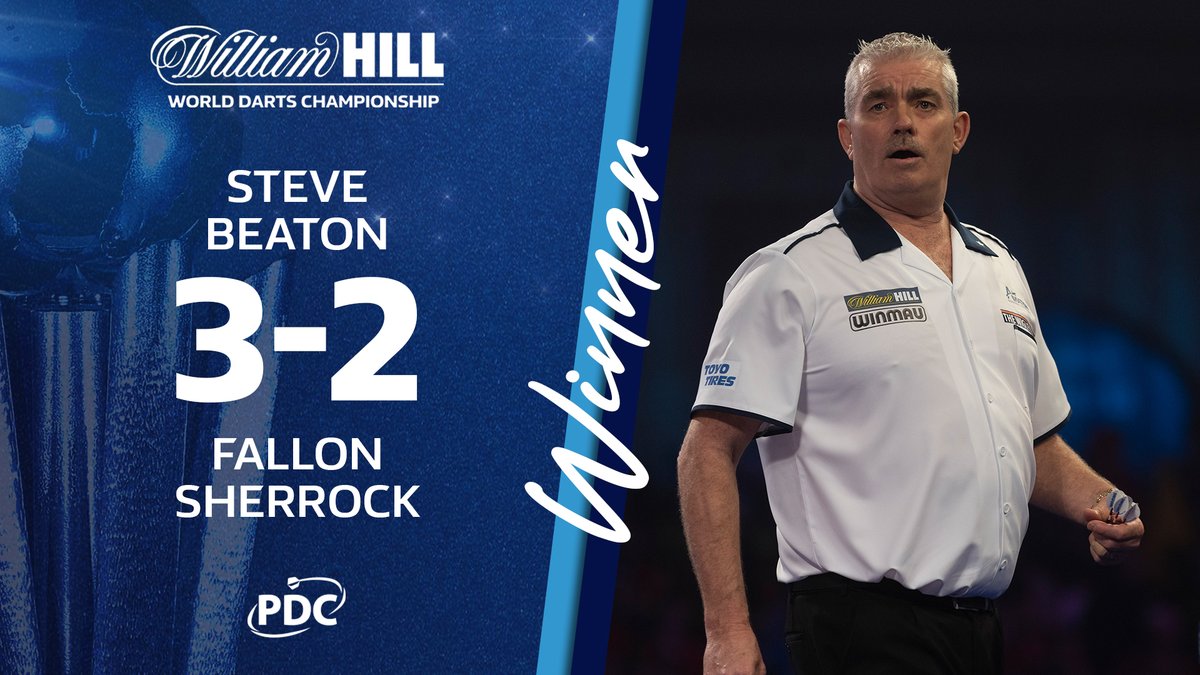 In the third set Sherrock struggled to keep up with Beaton’s consistency as the 57-year-old opened up a quickfire two-leg lead, and when both missed multiple double in the third leg it was Beaton who closed out the set with a double four. Sherrock blasted back in style in the next set though, returning the favour by sweeping the set, finishing on double top to level up the tie and force a decider.

After the first three legs of the final set went with the darts, it was Beaton who broke through in the fourth leg, checking out on 68 to secure a second-round clash with Kim Huybrechts.

In the night's only second-round fixture, Jonny Clayton produced 10 and 12-dart finishes at a crucial point in the fourth set to avoid defeat to young Irishman Keane Barry, with the eighth seed eventually winning the decider with some timely brilliance. It was a match of high quality, with 10 ton-plus finishes between the two players in the 20 total legs.

Martijn Kleermaker opened the night with a convincing victory over Greece’s John Michael in four sets, blasting his way into a speedy one-set lead before edging a tight second set and wrapping up the victory with a second 3-0 set in the fourth with an overall three-dart average of 91.17 to Michael’s 83.37.

Germany’s Florian Hempel delivered a stunning checkout of 156 to clinch the first set against compatriot Martin Schindler, and after nudging his way over the line in the second set he was convincing again in the third in wrapping up a 3-0 win.