Ah, FC Barcelona… the club of Lionel Messi and Johan Cruyff, of Hristo Stoichkov and Carles Rexach. The institution which for over 50 years has been referred to as ‘Mes Que un Club’ (more than a club). The organisation which for so long refused to sully their cherished red and blue kit with a sponsorship logo, whatever the cost in potential commercial revenue.

That FC Barcelona is a thing of the past. The FC Barcelona which has replaced it is a disgrace to the once-great name.

These days they have controversial music site Spotify’s name emblazoned across both their jerseys and their stadium, have been run by a succession of bumbling presidents who have bounced from one crisis to another, lost their greatest ever player through complete financial mismanagement and now are unable to so much as register their new signings, all while begging and threatening their registered players in a bid to slash their wages.

Attempts to sell off future income streams haven't even worked, with La Liga sussing that president Joan Laporta had declared a €667 million influx for the sale of TV rights even though €150m of the agreement had come from the club itself. While the league refused to account for it in Financial Fair Play judgements, Barcelona are set to pay €37.5m capital gains tax on the deal, putting them further out of pocket with no material gain on the pitch.

What the club, let alone the team, will look like come opening day on Saturday against Rayo Vallecano remains anyone’s guess. They’ve signed Robert Lewandowski, Raphinha, Andreas Christensen, Jules Kounde and Franck Kessie this summer, but they face a race against time to find a way to register their new additions before the cut-off. And while they are hopeful that they can sell further future income to arrest the issue, their attempts to bully Frenkie de Jong into either taking a pay cut or agreeing a move to Manchester United have been as scandalous as they have been pathetic. 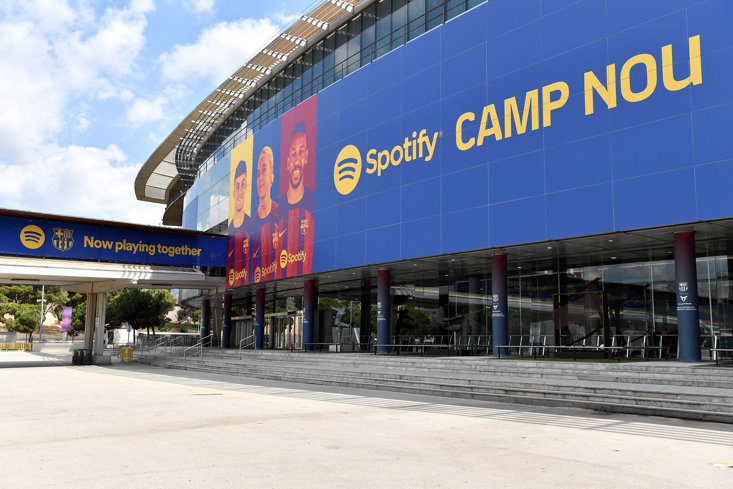 BARCA'S FORMALLY UNTOUCHABLE SPACES ARE AVAILABLE TO THE HIGHEST BIDDER

First they begged the Dutchman to slash his wages in the fashion that Gerard Pique and others did last summer after the loss of Messi to Paris Saint-Germain. When he said no to that and asked what was happening to the €17m he was already owed in wages he had deferred to help the club out during the Covid-19 pandemic, Barca fought back by claiming that his contract, signed off by the previous board, could actually be illegal and liable to get both club and player into serious legal trouble.

This is a football club being run like a dodgy market stall. They’ve bought the really good Calvin Klein gear but the demand on the High Street doesn’t match the overheads so they’ve fallen behind on their ground rent and don’t have the cash to pay their licence. The response? They’re trying to pay their bills by promising they’ve got some really great stock coming in soon that will fly off the shelves and they’re ‘Good for it, honest’.

In fact, if infamous rogue trader Del Boy Trotter tried such a scheme on an episode of Only Fools and Horses it would probably be considered far-fetched even for him. Barca have stopped just short of trying to monetise the appearance of Laporta and Pique in Batman and Robin costumes in their crazy bid to recoup whatever cash they can to get them out of their current mess.

Barcelona used to be built on admirable principals and sturdy philosophies. Now the whole empire is built on quicksand. They have players in limbo, fans in fear, finance experts in disbelief and a once-great name is left looking ridiculous. Their very future is now in serious doubt and it will take the most creative of accountancy to find a way out of one of the biggest financial messes football has ever seen.