Football
News
Belgium booked their place in the Euro 2020 quarter-finals after a thriller in Seville
Gary Maiden
22:05, 27 Jun 2021

It’s a shame that a Hollywood clash between the world’s best-ranked outfit and the reigning champions came at the last 16 stage, although it was fitting that a moment of real quality settled proceedings.

Roberto Martinez will be sweating on the fitness of Kevin De Bruyne and Eden Hazard, with both star men being withdrawn with injuries, but tonight was all about progressing.

As for Cristiano Ronaldo, he’ll have to wait to break Ali Daei’s record of 109 international goals, with the Juventus star failing to shine when his country needed him most.

However, the night belonged to Belgium after an action packed second half in Seville.

In a fairly timid opening half an hour, the two best chances of the first half fell to Portugal. Renato Sanches, who tonight showed why he was once one of the most sought-after youngsters in the game, picked out Diogo Jota, only for the Liverpool man to pull his left-footed strike wide of the far post.

That was an early warning sign, with Ronaldo’s free-kick midway through the opening period forcing a smart save from Thibaut Courtois with the ball dipping and swerving all the way.

A first half that was meant to produce fireworks from the first whistle had done anything but, although that all changed three minutes before the break when Hazard stepped up with a real piece of quality. 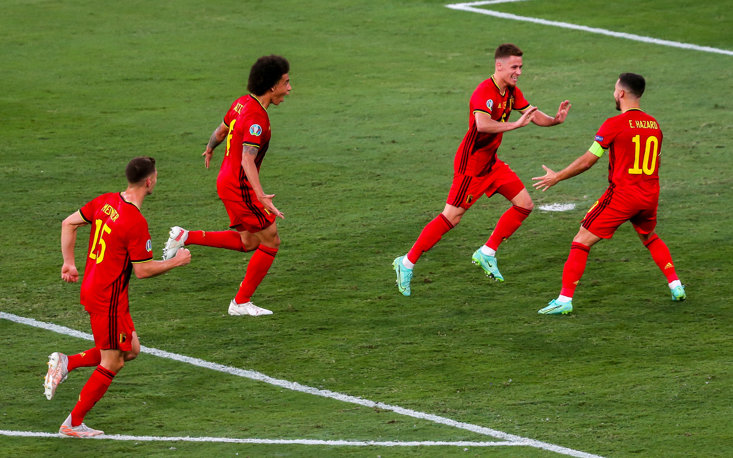 While Eden Hazard may be expected to produce moments of quality when his nation needs it most, it was brother Thorgan who put the best-ranked team in world football ahead when he picked up the ball outside the area and cut across it to leave Rui Patricio flapping at thin air.

That goal proved the difference heading into the interval, and Ronaldo and co needed a big second half to prevent the reigning champions from being dumped out in the first knockout phase.

The jubilant mood of the Red Devils’ fans soured somewhat two minutes after the break, when Kevin De Bruyne was taken off after failing to recover from an earlier foul.

The Manchester City playmaker is without question one of the most naturally talented players in the tournament, and Roberto Martinez will be desperate to have him available for the Italy quarter-final.

On 55 minutes, Fernando Santos introduced Joao Felix and Bruno Fernandes in a bid to inject some much-needed flair. Five minutes later, he nearly got his wish when Ronaldo found Jota in space only for the 24-year-old to fire over when he should have hit the target. That chance summed up Jota’s tournament, and he was hooked after another disappointing display with 20 minutes to go.

With the clock ticking down, Pepe appeared to do his best to get himself sent off as tempers flared between two giants of European football. Into the final 10 minutes and Belgium were hanging on. Ruben Dias directed his free header straight at Courtois when finding either corner would have levelled proceedings, before Raphael Guerreiro’s volley rattled the woodwork.

Eden Hazard was replaced late on with what looked to be a hamstring injury and Belgium will be sweating the fitness of both him and De Bruyne ahead of that Munich clash with Italy.

Felix came within inches of bagging a late equaliser but his injury time effort crept agonisingly wide of the near post.

If that is to be the last time we see Ronaldo at the Euros, his records will stand for years to come. There’s always the World Cup next year though.

As for Belgium, in what is being billed as the last chance for their golden generation to fulfil their promise, that dream is one step closer to becoming a reality.