Luca Brecel became the first player from mainland Europe to reach the final of any of snooker’s Triple Crown events on Saturday.

The brilliant Belgian is into Sunday’s Cazoo UK Championship showpiece at the York Barbican after beating England’s Kyren Wilson 6-4 with four century breaks.

And world No40 Brecel, 26, will attempt to make history and fuel the snooker boom across the Channel as he competes for the trophy and the £200,000 first prize.

Brecel, who has got to the quarter-finals of both the Masters and the World Championship, now has the chance to deliver on a huge potential – and it is just a surprise the China Championship is his only big title to date.

The United Kingdom and Ireland have always been snooker heartlands, but following the major expansion into China, Thailand and the Far East a major champion from Europe is high on the governing body's wish-list.

The watching pundits and former UK champions in the BBC studio were left drooling. Shaun Murphy described Brecel as “absolutely unplayable” on this form. 1991 winner John Parrott insisted that Brecel was playing “as good as anyone possibly can”.

Brecel said: “I feel unbelievable, it is a dream. I was so nervous last night and didn’t really sleep, dreaming of the final. But out there I was composed and didn’t think too much.

“I did play awesome today. I got out of position a few times in that last century break but I just managed to keep potting. It is the best feeling I have ever had in snooker at the end.

“Much better in China when I won the title because there were so many people here. I hadn't played my best in the tournament before the semi-final, but today was different.” 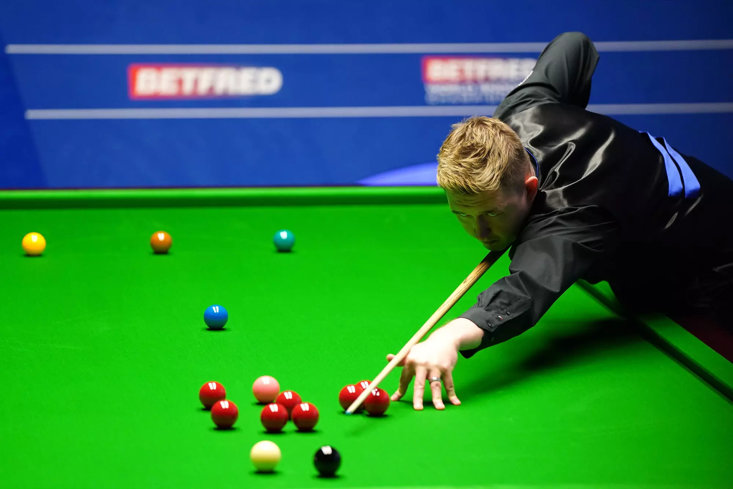 Wilson said: “Without doubt the better man won on the day. Luca’s scoring was phenomenal, especially given the huge pressure out there. I felt the momentum start to shift earlier in the match, maybe I could have gone 4-2 up.

“But I feel like I left everything out there, it is much worse if you don’t turn up. It has been a crazy event so who knows if they will go on to win it, everyone fancies their chances. But I have gone close, having got a new cue a week ago, so that gives you confidence.”

It was a sweet moment for Brecel, who as a talented youngster forging his way struggled with some aspects of life on tour.

The travel, time away from home, lack of facilities and practice partners at home and at various times lack of dedication, loss of form, a shoulder injury and cue problems left him “depressed” a couple of seasons ago. But this was a real reward for a great deal of recent hard work.

Having made the final a beaming Brecel admitted that he had suffered a real scare earlier in the tournament – by managing to lock himself in the bathroom of his York apartment shortly before being due to take to the arena to face Anthony Hamilton.

After a brief panic his girlfriend helped summon the manager and after a worrying 10 minutes with fears of being docked a frame or worse for being late for the scheduled start running through his head, Brecel managed to break free and make it over to the Barbican just in the nick of time.

He added: “I can’t believe everyone knows about it now – it is my girlfriend, she told Shaun Murphy and then he just told everyone on live TV! In the end it was all okay – and I won the match 6-1 against Anthony so I think I would have been okay even if I had been there a bit longer!”

The barrage began right from the very start, with the Belgian knocking in a break of 130. But Wilson, who did very little wrong throughout the match, responded in kind with a 121.

Brecel then made it three centuries in consecutive frames with another superb run of 105, and looked shocked when despite a 59 in the next Wilson pinched it with a 69 to level at 2-2.

Wilson, who showed he can hang tough in the magnificent 6-5 quarter-final victory over Ronnie O’Sullivan, showed he would never wilt by edging in front at 3-2.

That merely sparked more excellence from his 26-year-old opponent who rattled in breaks of 102, 97 and 80 to put him on the brink before an 83 from Wilson cut the deficit.

However a mistake from Wilson when Brecel had been wondering about a re-rack in frame 10 gifted him one last chance from which he knocked in a crucial clinching break of 112.

Brecel is 10/11 to win the UK Championship with Betfred*