It’s barely two months since the Euro 2020 final and yet the World Cup in Qatar is little more than a year away. You would think that the shorter-than-usual turnaround would mean less opportunity for players to emerge between tournaments, but England boss Gareth Southgate will already be counting on the greatest prominence of one player who featured little in the Three Lions’ run to a first final in 55 years. Borussia Dortmund’s Jude Bellingham looks ready to make his mark.

The 18-year-old dynamic midfielder has undergone an incredible rise in recent years since he made his debut for Birmingham City away to Portsmouth in August 2019, and he now has a regular spot in the heart of the Black and Yellows’ side both in the Bundesliga and the Champions League.

He’s no stranger to St George’s Park and Southgate’s squad, having made three appearances in that Euro 2020 odyssey. And while the youngster saw Declan Rice and Kalvin Phillips favoured in the middle of the park, this season will provide Bellingham with an extra year of experience on the pitch that could well make him the first name on the team sheet by the time Qatar comes around.

The ability that the young man possesses has always been raved about by everyone associated with Birmingham, even before he made his senior debut. Scouts from some of Europe’s elite clubs were tracking him while he was playing at youth level and now that he is constantly under the spotlight, turning in exceptional performances on the biggest stage, he could force his way into the England starting line-up for the first game in the Middle East next winter. 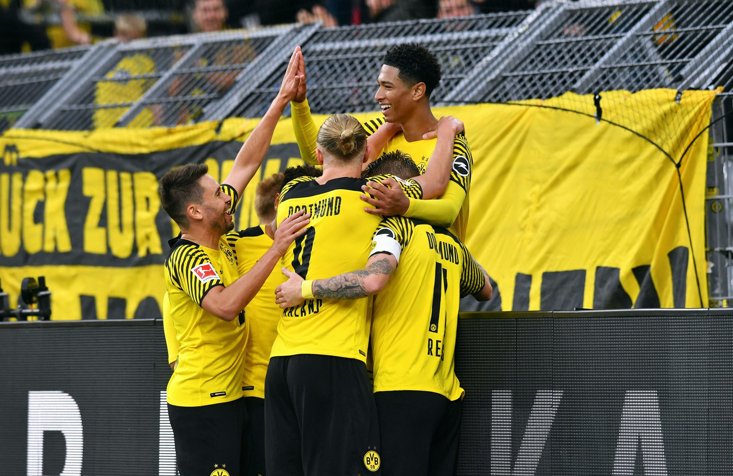 BELLINGHAM HAS BECOME A CENTRAL PART OF DORTMUND'S TEAM THIS SEASON

Back in Dortmund’s Champions League opener at Besiktas, the teenage sensation stole the show as his side came away from Turkey with a vital three points. He opened the scoring, showcasing the incredible ability he has for his age, taking down Thomas Meunier’s dinked ball, chesting the ball down, holding off his defender and coolly firing the ball through the goalkeeper into the back of the net.

Bellingham then became the architect for Dortmund’s second as he displayed neat footwork to weave his way into the penalty area before giving Erling Braut Haaland the easiest of finishes to complete the victory. The midfielder’s performance earned him further praise from pundits, with the likes of Rio Ferdinand calling for him to start for England. For those who are still yet to see the Birmingham City academy graduate in action, the hype is not exaggerated.

Since his arrival in the North Rhine-Westphalia, where Dortmund host Sporting CP in Group C of the Champions League on Tuesday, he has cemented a spot in the middle of the park, where he kept Danish international Thomas Delaney out of the side, which ended up with the 30-year-old leaving the club in the summer for Sevilla in search of regular game time.

Bellingham shows a maturity and composure on the field beyond his years that has rightly granted him a place in Southgate’s camp at such a young age. The versatility that he has in being able to fulfil multiple roles in the midfield comes from his excellent nurturing during his rapid development at youth level. He has the attributes to operate in a holding role, be a traditional box-to-box player or play as an attacking midfielder, and there is nothing more desirable for an international manager than having a player of his quality across several positions. Another great attribute that the Dortmund star has is that he isn’t fazed by his lack of experience, and he is always seen moving to receive the ball, demanding it from many of his seniors, which is already giving people a look at a future captain whether that be for club or country.

He possesses attributes that neither Rice nor Phillips have, which should sway Southgate to start bedding him into the Three Lions first team along with the stars that are likely to feature at the World Cup. The world joked at Birmingham for the whole shirt-retiring saga when he left for Germany, but many of those who laughed at the gesture now believe the West Midlands club were on to something.