Sometimes two teams can be so perfectly-matched that they cancel each other out. That was almost the case at Goodison Park today when the upwardly mobile Everton lost 1-0 to West Ham United. Both clubs have received well-deserved credit this season for their performances, but this battle of two clubs looking to bother the top six nearly ended in a stalemate. Neither side could assert themselves for long periods, and with the two managers both being acclaimed for their defensive solidity, there were very few clear-cut chances.

The first half was a cagey affair, with both teams swapping the initiative but not doing enough with it. Everton set up in their organised mid-block and invited the Hammers onto them. David Moyes’ side obliged in the early going, with Declan Rice trying to find creative avenues from deep through which to thread forward passes. Early crosses from Jarrod Bowen and Ben Johnson were cleared, as West Ham were forced into the wide areas.

Michail Antonio put the afterburners on for a dangerous run, but was booked for diving when he went down prematurely in anticipation of a Michael Keane challenge that never came. For the most part, Everton controlled the Jamaican talisman, limiting him in terms of touches and influence. A superb passing move from right to left led to Said Benrahma sending a shot high over the bar, but the away side looked to be in control.

Abdoulaye Doucoure provided the impetus for Everton as they felt their way into the game. The former Watford midfielder arrived late outside the box to send a shot over the bar and Rafael Benitez’s men eased into the ascendency. The Toffees would enjoy the chance of the half, when the excellent Demarai Gray isolated Angelo Ogbonna. Gray bypassed the defender, before slotting in a cross which neither Salomon Rondon nor Alex Iwobi could touch home.

They were nearly punished for this wastefulness when Bowen saw a low shot well-saved by Jordan Pickford, only for Tomas Soucek to fire the rebound into the roof of the net. Unfortunately for the travelling supporters, the Czech Republic midfielder was adjudged offside. 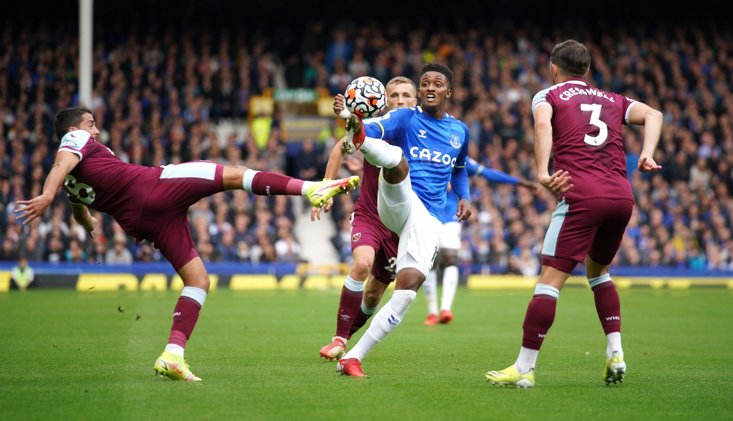 Everton started the second half brightly, with the resurgent Andros Townsend flashing a dangerous ball across goal. Iwobi had a shot blocked by Ogbonna as the Toffees piled on the pressure. The home chance had their best chance of the game so far when Townsend elegantly cut inside to deliver a deep cross to Rondon, who headed just wide. The former Newcastle United frontman really should have done better, after being given time and space by the excellent work of Townsend.

As with any period of advantage in this back-and-forth affair, West Ham did not remain under the cosh for long. Benrahma was lively, buzzing around the Everton penalty area, but too often seeing his speculative shots ricochet off defenders. Realising the opposition could read this, the Algerian cleverly dummied a shot before playing in Antonio with a superb through ball. The striker saw his shot blocked by Keane, continuing the running battle they’d fought all afternoon.

As often happens in a bitty, disjointed game such as this, a set piece proved the difference. Bowen drove in a corner and Ogbonna out-jumped Ben Godfrey to power it home. Since Moyes returned to the London Stadium in January 2020, West Ham have scored the most goals from non-penalty set pieces in the Premier League, with Ogbonna’s effort being their 29th.

Bowen nearly doubled the away team’s advantage late, sending Pickford full-stretch for a superb save. West Ham could not repeat the trick from the resulting corner though, with it powerfully headed clear. Everton piled on the pressure during stoppage time, but could not find the finishing touch to rescue a point.