The wait is almost over as Conor McGregor makes the final preparations for his return to the Octagon for the first time in 15 months.

His January 18 bout with Donald 'Cowboy' Cerrone will headline UFC 246 in Las Vegas, making the fight one of the first must-watch events of 2020, as the Irishman steamrolls his way into the new decade.

The 'Notorious' hasn’t featured in a UFC bout since submitting to Khabib Nurmagomedov in their October 2018 grudge match, but McGregor has now completed his last heavy spar before travelling to Nevada for his UFC comeback.

But Cerrone shouldn’t expect a repeat of the events that occurred at the tail-end of 2018, and the American has good reason to be worried. According to McGregor’s coach John Kavanagh, the former featherweight and lightweight champion is in the best shape he has ever seen the mixed martial artist.

With a little under three weeks to go, Kavanagh has taken to social media to salute 31-year-old McGregor’s transformation, with the suggestion that Cerrone is unfortunate to be facing him as the first hurdle in his comeback. McGregor's coach reckons his man is now a real force to be reckoned with as he eyes the prize of regaining his belts from Nurmagomedov.

"Jan 1st, last heavy spar today before going to Vegas. Can honestly say this is the best I've seen him and I wasn't sure that was possible to do 6 months ago,” Cavanagh has declared,

You guys are in for a real treat

Cavanagh knows what he’s talking about - the Brazilian jiu-jitsu specialist has helped hone the talents of such stellar fighters as McGregor, Makwan Amirkhani, and Gunnar Nelson, as well as being the recipient of the World MMA Awards Coach of the Year in 2017. He’ll be in McGregor’s corner once again as he faces the American Cerrone in what is hopefully one of the sporting highlights of the new year.

Cerrone, five years McGregor’s senior and with a height advantage of two inches, possesses a 36-13-0 record. However, he enters the Octagon on the back of consecutive losses to Tony Ferguson and Justin Gaethje, respectively.

There’s been distinctly far less noise coming out of McGregor’s camp in contrast to the blockbuster bouts of the recent past, namely Nurmagomedov, Nate Diaz , José Aldo, and his foray into the world of boxing to face Floyd Mayweather.

This upcoming return is an attempt at a turnaround for what has been a humbling and often difficult year for the Irishman, which saw him being arrested twice, and the once notoriously outspoken McGregor has been somewhat quietened.

There’s a feeling that things are about to get a whole lot louder in 2020... 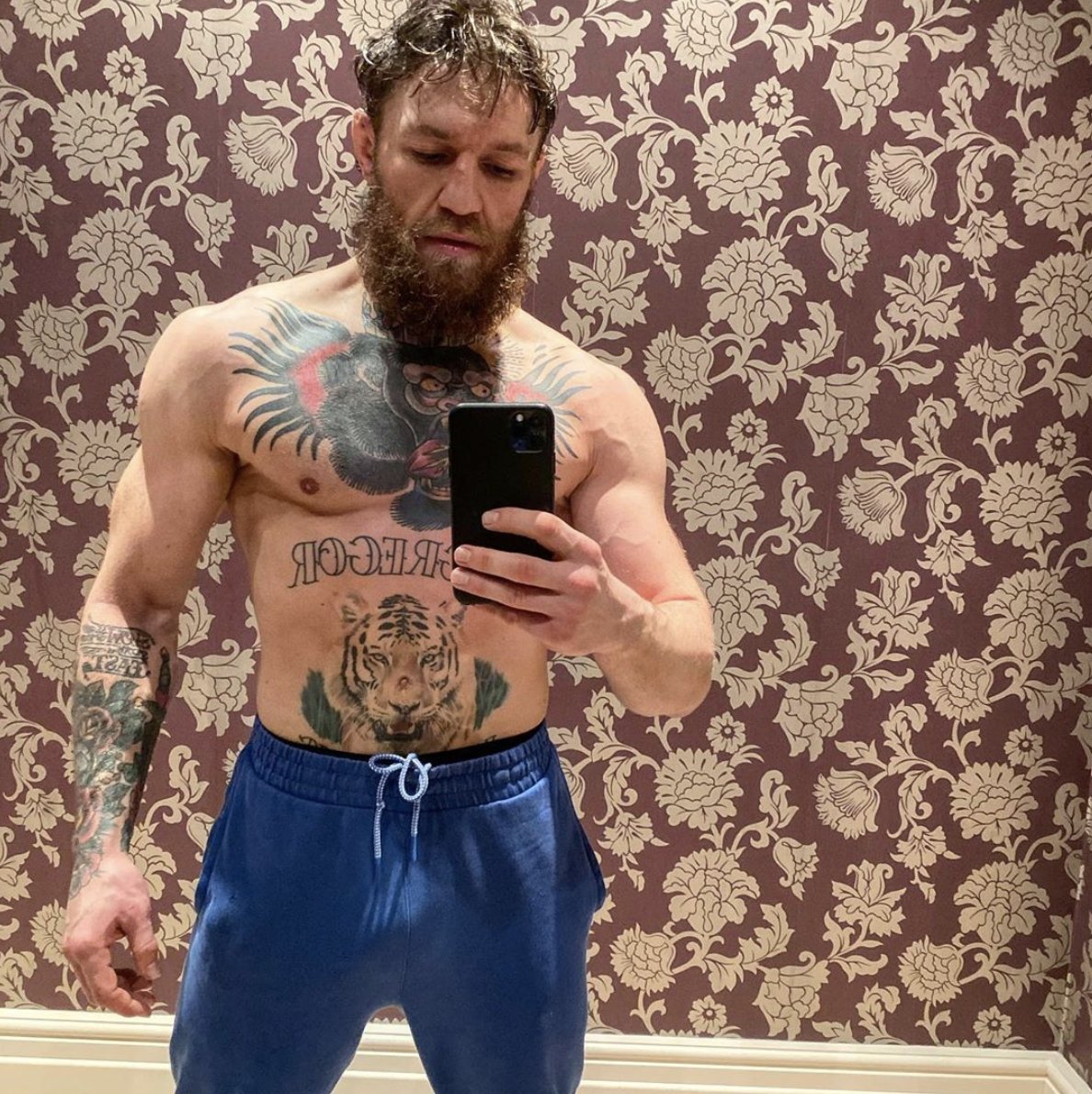 2837
28294
x
Suggested Searches:
Tyson Fury
Manchester United
Marcus Rashford
Lewis Hamilton
F1
Air Jordan
More
mma
Talented, Tough And Charitable, Who Is Conor’s UFC 257 Opponent...
All eyes will be on Conor McGregor this weekend as he makes his return to the Octagon after another [ ... ]
mma
Michael Bisping’s Believe You Me Is The Perfect Pod To Satisfy...
With nearly 300 episodes to currently demolish, this is the podcast to satisfy your MMA munchies.  [ ... ]
mma
The UFC Needs Paige VanZant's Instagram Followers More Than...
It was over almost before it began. Eighteen months of waiting culminated in a dominant Amanda Ribas [ ... ]
mma
Sanitised Violence: When Cage Warriors Went Behind Closed Doors
Just before UK lockdown began, top European MMA promotion Cage Warriors took place in a hauntingly deserted [ ... ]
mma
From The Greatest To The Fiercest, UFC 245 Promises A Night...
Let’s take stock for a second. 2019 has delivered some blistering moments. Who can forget Jorge [ ... ]
mma
Hungry And Focused, It's The New Improved Conor McGregor
Conor McGregor’s striking coach, Owen Roddy, insists his fighter “has that hunger again” [ ... ]
mma
''Focused'' Conor McGregor Announces His Octagon Return In 2020
Conor McGregor has come out of MMA retirement and announced his return to UFC at the start of next year. [ ... ]
mma
From Flanker To Fighter: James Haskell Talks To TheSportsman...
Former England rugby star James Haskell announced last week that he'll be swapping his scrum cap [ ... ]
mma
His Three Most Notorious Moments Inside The Octagon As Conor...
The former UFC featherweight and lightweight champion Conor McGregor has announced his retirement [ ... ]
mma
Tenshin Nasukawa Unleashes Amazing Capoeira Kick To Bounce Back...
The defeat to Floyd Mayweather in a farcical exhibition big-money boxing match on the last New [ ... ]
mma
#Bellator216: Michael Page Outpoints Paul Daley In Disappointing...
Michael ‘Venom’ Page outpointed long standing rival Paul Daley at the Mohegan Sun Arena [ ... ]
mma
#Bellator216: MVP And Daley Set For All-British Brawl In Connecticut
The biggest domestic UK MMA fight of all time goes down this Saturday evening… in Connecticut, [ ... ]
mma
Aaron Chalmers Suffers Shock Defeat In Hometown Bellator Newcastle
Bellator kicked off their European Series in Newcastle with a bang, with an incredible twelve finishes [ ... ]
mma
Aaron Chalmers Aims To Please As Bellator Heads To Newcastle
Aaron Chalmers bids to move to a perfect 5-0 record as a mixed martial artist in his hometown, as he [ ... ]
mma
Conor McGregor 'Clone' - German MMA Fighter Emulates His Hero...
If you are going to model yourself on UFC Legend Conor McGregor then you better be able to deliver the [ ... ]
mma
Conor Mcgregor And Khabib Nurmagomedov Slapped With Hefty Bans...
Conor Mcgregor And Khabib Nurmagomedov have both been banned for their parts in the mass brawl that [ ... ]
mma
Tenshin Nasukawa Responds To Conor McGregor Calling Him Out
The Japanese martial artist Tenshin Nasukawa has seemingly not allowed his confidence to be knocked [ ... ]
mma
Celtic Gladiator 22: Brendan Loughnane And Kane Mousah Headline...
European mixed martial arts show Celtic Gladiator return to Manchester on Friday night for the second [ ... ]
mma
Horrendous Scenes As MMA Fighter Dislocates His Knee Whilst...
Not what you want to see on a Sunday morning but here we go anyway. As we know, MMA is probably the [ ... ]
mma
Yair Rodriguez Stuns Chan Sung Jung With Last Second Knockout...
Yair Rodriguez produced a sickening elbow to the face of Chan Sung Jung in the last second of their [ ... ]
mma
Conor McGregor Inspires Dallas Cowboys To Victory And Claims...
Conor McGregor bounced back from his defeat to Khabib Nurmagomedov by watching the Dallas Cowboys beat [ ... ]
mma
Conor McGregor's Top 5 Knockouts
The return of Conor McGregor to the octagon after an extended… sabbatical will redraw the collective [ ... ]
mma
Korean Taekwondo Team Dazzle Audience With Action Packed Display
It’s over ladies and gentleman. If you’re thinking about taking up Taekwondo, or looking [ ... ]
mma
Ultimate Fighter 27 Finale Is Perfect Prelude To UFC 226!
The Ultimate Fighter Season 27 draws to a close as the perfect warm-up act for the hotly anticipated [ ... ]
mma
Aaron Chalmers' First Bellator Bout Sees The Ex-Geordie Shore...
On Friday night, MMA fighter Aaron Chalmers sensationally won his bout with Ash Griffiths by technical [ ... ]
mma
UFC Atlantic City: Kevin Lee Misses Weight, Main Event Still...
The octagon returns to Atlantic City, New Jersey for the first time in nearly four years with the promotion [ ... ]
mma
Jacare Meets Brunson In Main Event At UFC Charlotte
The octagon returns to Charlotte, North Carolina after almost an eight-year hiatus with a twelve-bout [ ... ]
mma
Behind the Medals: Bianca Walkden's Year To Remember
A two-time world champion, an Olympic bronze medallist, a record-breaking Taekwondo practitioner and [ ... ]
mma
Chalmers, Scope And Edwards Win Big At BAMMA 33!
Aaron Chalmers continued his perfect start to his mixed martial arts career in Newcastle last night [ ... ]
mma
Geordie Shore Star Aaron Chalmers Scores Stunning Knockout Win...
Reality TV stars are often questioned on whether or not they have any discernible talent but it seems [ ... ]