Rugby League
News
The Bulldogs head to Fev after upsetting Halifax in round one
Lewis Smith
08:00, 27 Mar 2021

The Betfred Challenge Cup came back with a bang last weekend and returns for round two seven days on. Lewis Smith, from Betfred’s The Last Tackle, gives us the lowdown on Saturday’s clash

The first round of the Betfred Challenge Cup last weekend saw a joyous return of Rugby League, and with the eight remaining Championship clubs now just two wins away from Wembley, the temperature has gone up another notch ahead of the second round this weekend.

The four winning clubs this weekend will qualify for the semi-finals of the 1895 Cup as well as the third round of the Betfred Challenge Cup, which will see the introduction of the 12 Betfred Super League clubs.

Featherstone Rovers vs Batley Bulldogs – Saturday, 12:45 – Live on The Sportsman

Featherstone have been tipped by many this year to be the side that earns promotion to the Betfred Super League and they gave us a good glimpse of those credentials with a convincing 41-16 win over Bradford Bulls in the first round.

There were impressive performances from a number of Rovers’ new signings, including Dale Ferguson and Thomas Minns, and on reflection James Webster will no doubt be pleased with the workout, whilst knowing his team can still improve.

What was evident against the Bulls was the variation in Featherstone’s threat. They’ve got a big, aggressive pack that is capable of punching holes in the defence on its own, and if that fails, Dane Chisolm is an experienced lockpick, who will be looking to bring their exciting three-quarter line into the game early on.

Rovers will be keen to progress to the third round in the hope that they can draw a Super League side and test themselves against clubs from the league that, ultimately, they want to be in, they’ll have to overcome a stubborn and well-coached Batley side first. 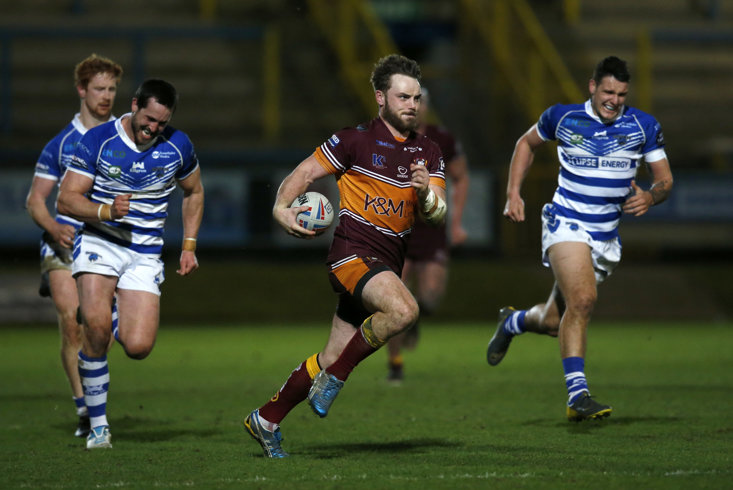 The Bulldogs were brilliant against Halifax in a game that many, myself included, tipped them to lose. They matched the Panthers physically and then showed some real class in the backline; Jack Logan’s try, which was started 60 metres out, showed that Batley fans could be in for an entertaining year.

Perhaps the most pleasing thing for Craig Lingard, however, will have been his team’s defensive performance. The Bulldogs looked extremely well organised without the ball, and will have been delighted to restrict Halifax to just six points. If they can produce something similar against Featherstone, and be within the odd score after an hour, they’ll feel they have a real chance of causing another upset.

Batley will have been massively encouraged by their last outing, and will feel that they strengthened their top-half credentials for the upcoming Betfred Championship season. The reality is, however, that Featherstone looked like a Super League side in the making, and it will take a massive effort from the Bulldogs to book their place in the next round.

Prediction: Batley will make Featherstone work hard, and had this tie been drawn on the slope of the Fox’s Biscuits Stadium, I’d almost be tempted to back them to take another scalp. But at the Millennium Stadium, I can’t look past Featherstone. Rovers by 16.

The match will be shown live here on TheSportsman.com, as well as on our YouTube and Facebook platforms.