Rugby League
News
There are some tasty ties still to be played in the first round
Lewis Smith
07:00, 21 Mar 2021

The Betfred Challenge Cup returns this weekend, and Lewis Smith, from Betfred’s The Last Tackle, has given us his prediction for Sunday’s games:

With five thrilling ties having already been decided, Sunday sees the final trio of first round fixtures take place. And there are some headline acts set to take part, too.

Wow, what a cup tie this is!

These early rounds of the cup are always great, not because you get any clear idea of who is going to be lifting the trophy at Wembley in July, but because of the stories that they throw up, and this one has an absolute boat-load.

It’s fair to say that West Wales have been in a development phase for the last few years, the perennial League One whipping boys picking up just one win in two seasons. That could be set to change in 2021.

I’ve long said that Rangi Chase is the most the skilful footballer I’ve seen play the domestic game on these shores, so there’s a real sense of intrigue as he lines up in the halves. If we get just one moment of magic from the former England international, it will be a cup tie worth watching.

Chase will wear 7, but there’s an even bigger story wearing 6, and that’s because Wales Rugby Union icon Gavin Henson is set to make his Rugby League debut on Sunday. There’s no doubt the former British and Irish Lion will have people reaching for the red button across the country, but he could also find himself with a big target on his back. It’s going to be interesting to see how he goes.

Widnes have been quietly building on what they put together for the doomed 2020 season, and a spine of Danny Craven, Matty Smith and Logan Tomkins is as good as any in the Betfred Championship.

Prediction: These are exciting times for West Wales, I certainly don’t think they’ll be getting flogged every week in Betfred League One, but Widnes will have far too much for them on Sunday. Vikings by 30. The second half of the BBC Red Button double-header is arguably the tie of the round as Bradford make the trip to Featherstone Rovers.

Fans will be sorely missed at all games this weekend, of course, but it’s hard not to think about the atmosphere that might have been at a packed out Millennium Stadium (Post Office Road) for this Yorkshire derby.

Rovers may still feel slightly aggrieved to be playing in this round of the Challenge Cup, since they arguably had a strong case to win the Betfred Super League place awarded to Leigh, but there can be no doubt they’ve got a squad in place capable of earning promotion organically this time around.

There’s well over 1000 Super League appearances shared amongst their first-team group between the likes of Craig Kopczak, Brett Ferres and Dale Ferguson, but if I was in charge of the Bradford Bulls’ video preview (I am available on a freelance basis, if any coaches are reading), I’d be putting a big circle around Kris Welham. The former Salford centre has one of the deadliest fends in the game and requires plenty of attention in defence, if he gets the ball in his hands in good field position he’s a difficult man to stop.

How Bradford go this season could be dependent on the performances of Danny Brough, but they’ve got strike out wide of their own. Matty Dawson-Jones is as dangerous as any winger in the Betfred Championship, and young Brandon Pickersgill at full-back is a player who Featherstone will need to keep one eye on at all times.

Prediction: This should be a fantastic game of Rugby League football. I’m backing Featherstone but not by much at all. I won’t be embarrassed if I get this result the wrong way round. Rovers by 4 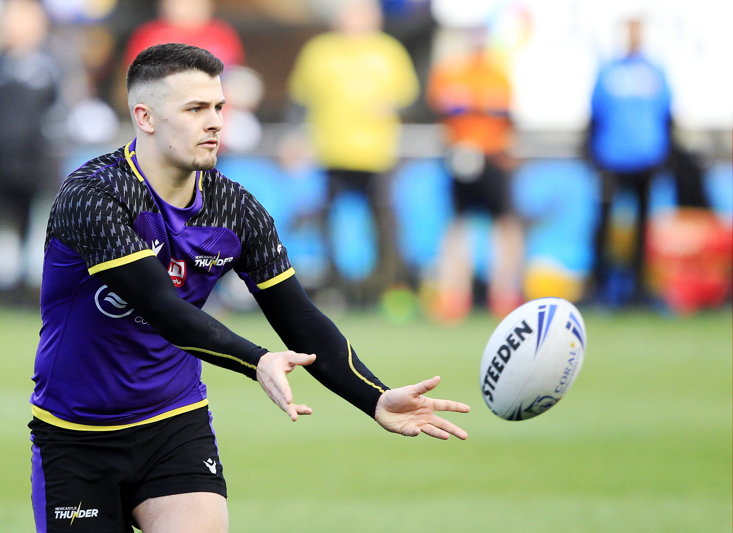 The first weekend of the Betfred Challenge Cup is rounded off at Heywood Road, with Betfred Championship new boys Newcastle Thunder making the trip west to take on Stuart Littler’s Swinton side.

I’ve actually got this down as one of the closest ties of the round, and definitely one of the most intriguing as we’re set to learn a lot about both sides on Sunday night.

Swinton had a really strong 2019 by their standards, finishing ninth, the big question of course will be if they can pick up where they left off after a year on the sidelines and continue to make progress.

New signing Martyn Ridyard adds valuable experience in the halves, whilst Lions fans will watch on with interest to see how Geromino Doyle performs after joining from Auckland-based club Otahuhu Leopards.

Newcastle have made no secret of their ambitions to establish themselves as a Super League club, and the first stage of that was reached when they were promoted into the Betfred Championship for 2021.

They’ve put together a strong looking squad for this campaign as well, the duo of Jake Shorrocks and Josh Woods is a really exciting half-back partnership, and Ukama Ta’ai will add some real physicality in the pack. Come Sunday night, we should know a bit more about what to expect from the Thunder this year.

Prediction: Really tough to separate these sides, I’m going to back Newcastle, but I think it will be close. Thunder by 8