It will be two out of three next weekend in the race for a play-off place in the Betfred Super League after Round 24 wins for Wigan Warriors and Hull Kingston Rovers, and damaging defeats for Castleford Tigers and Hull FC set up a fascinating final round of the regular season.

Wigan’s 10-0 win at Hull clinched the Warriors both a finals spot and a home tie in the elimination round, while it also put paid to the Black and Whites’ hopes of making the top six. Second-half tries from Jake Bibby and Zak Hardaker saw Wigan over the line in a hard-fought match which went scoreless for the first 51 minutes before Bibby crossed, with Hardaker giving the visitors some breathing space 10 minutes later.

Over on the east side of the same city, Hull KR recorded a huge 26-19 victory over Castleford to send them leapfrogging both the Tigers and Leeds Rhinos into fifth place with one game to play. Young half-back Mikey Lewis scored twice for the Robins, with Matt Parcell and Kane Linnett both adding tries as Rovers came from behind twice to seal a monumental win on the night the club bade farewell to Mose Masoe.

The Samoan prop forward suffered a career-ending spinal injury in January 2020, but Rovers insisted on honouring his contract through to the end of the 2021 season. And with the former St Helens, Sydney Roosters and Penrith Panthers star now heading home for Australia to continue his rehabilitation it was an emotionally-charged Craven Park which saw Rovers secure the win which puts them within a draw against Leeds on Friday on reaching the end-of-season play-offs for the first time since 2013.

They go into the showdown ahead of the Rhinos following Leeds’ heavy 40-6 loss to St Helens on Friday. Morgan Knowles scored twice and Alex Walmsley carried for 275 metres and make 13 clean breaks in a dominant Saints performance as they geared up for the semi-finals. 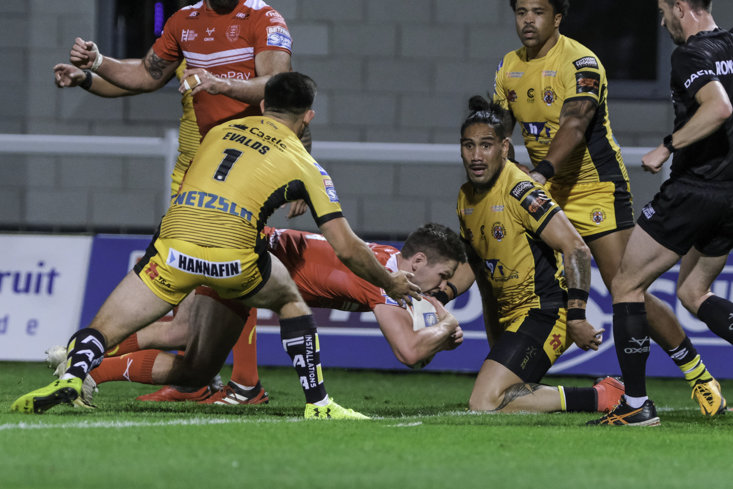 MATT PARCELL GRABBED ONE OF FOUR ROVERS TRIES AGAINST CASTLEFORD

Leigh Centurions recorded a second win in four games on Sunday as they saw off Wakefield Trinity with a 26-18 success at the Leigh Sports Village. Ryan Brierley was their star, scoring a hat-trick, while Adam Sidlow and Sam Stone also dotted down for the Super League’s bottom-placed side.

Catalans Dragons lifted the League Leaders’ Shield on Saturday despite going down 30-18 at home to Huddersfield Giants with a slightly weakened side, while George Williams’ golden-point drop-goal – his second one-pointer of the game – saw Warrington Wolves edge Salford Red Devils 20-19 in the weekend’s other fixture.

All eyes will now be on Thursday and Friday night, with Castleford hosting Warrington on Thursday knowing that a win will be enough to take them through to the play-offs. Twenty-four hours later Hull KR head to Leeds, with the winners qualifying for the top six and the losers only making it if Warrington get the job done at the Jungle.