As Chelsea take to the Santiago Bernabeu pitch tonight with dreams of staging a unlikely comeback against Real Madrid, there will be a whole host of world class talent on show. Real Madrid’s starting line-up in the first leg cost £287m while Chelsea have invested over £300m on players in the last two years.

Yet, their main asset in the Spanish capital is a player they nurtured through their academy. He didn’t cost them a penny in transfer fees and yet now, he is statistically their most influential player. With ten goals and 13 assists in all competitions this season he currently has seven more goal contributions than top scorer Kai Havertz. Yet unlike the German, who scored the winning goal in last season’s Champions League final, Mount goes under the radar of the wider footballing public.

Chelsea fans certainly appreciate their hard-working English maestro and his role is so vital, especially this season when they have lacked an out and out striker. Romelu Lukaku and Timo Werner’s struggles have meant that Havertz has played as a false nine in the big games, with Mount and one other entrusted to create in behind him.

“Mason Mount is so adored by Chelsea fans because it becomes increasingly obvious every time he plays that he leaves it all on the pitch for the club," The Pride of London told The Sportsman.

"Whether it’s kissing the badge when he scores or celebrating a teammates goal with the fans in the stands, he’s a genuine fan, in addition to being one of the club’s best players.”

"Mason Mount just gets what it means to be a Chelsea player. Every single time he plays, he plays for the badge and thats all you can ask for in a player at this club. The boy who rose through the academy and conquered his dream of becoming a European champion." added UberChelsea, while TheChelseaSocial said, "He represents the club as well as any have in recent times and he has given the club a player to rally around, support and see a future for amidst a turbulent few years."

This freedom in Thomas Tuchel’s 3-4-2-1 allows the 23-year-old to shoulder the responsibility of being the team’s main creator, while his finishing in front of goal has also gone up another level this term. It’s remarkable to think of the progress he has made since he was a teenage sensation on loan at Derby under Frank Lampard and the Chelsea fans have a lot to thank their greatest ever goalscorer for.

It would be a lazy comparison to say that Mount learned how to become a goalscoring midfielder from Lampard - they are two completely different players - but working under him certainly benefited his career and gave him a chance in Chelsea’s first team. Whereas Lampard was more likely to drive a shot in from the edge of the box, or arrive late in the penalty area to finish, Mount’s movements are more subtle, and arguably more suited to the modern game.

As this floating number ten, he is sometimes the Blues’ furthest man forward, but is more likely to pick the ball up in that half-space between the lines from one of Chelsea’s flying wing-backs. His relationship with Reece James has been hugely profitable for them and is perhaps a sign of the positive future that lies ahead at Stamford Bridge, away from major investment. 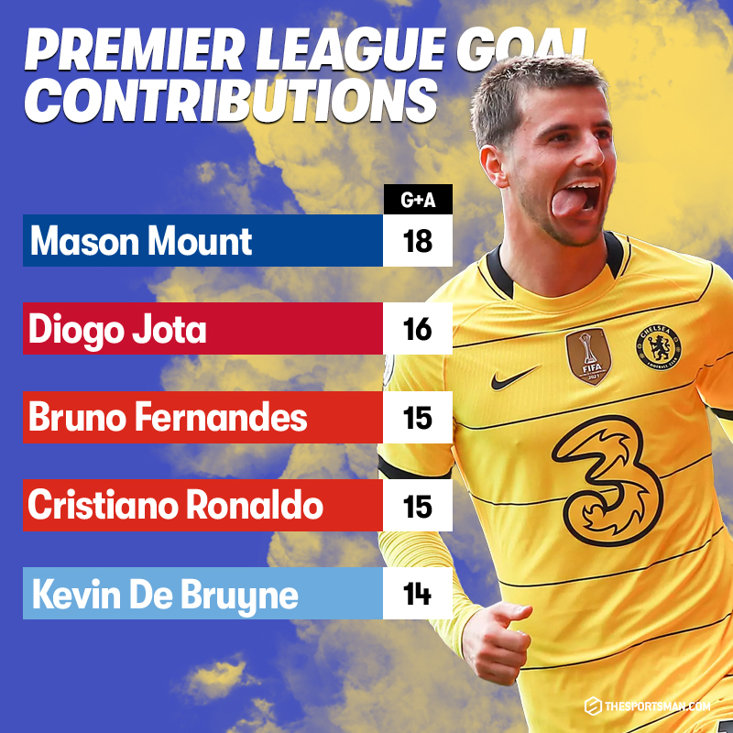 Along with the now departed Tino Livramento and Tammy Abraham, Cobham continues to produce an outstanding crop of talent that are good enough to compete in the Premier League. Armando Broja and Conor Gallagher have shone this season, while the likes of Billy Gilmour, Levi Colwill and Ian Maatsen could all play roles in the first-team squad in the future.

Mount is the cream of the crop from their outstanding academy at the moment, having got more Premier League goal contributions (18), than Diogo Jota (16), Bruno Fernandes (15) and Kevin De Bruyne (14) this term. Yet he isn’t ever considered in the same bracket as those more fashionable players.

For England, amongst fans he has always been considered the man who should drop out if Jack Grealish is afforded a start, but for Gareth Southgate he is a non-negotiable. In Qatar, he will almost certainly start for the Three Lions and for Chelsea, he is now Tuchel’s key man.

At the Bernabeu, the Blues will need to rely on Mount if they have any chance of staging an improbable comeback, but their form away from Stamford Bridge is impressive. They are unbeaten in their last 13 away games in all competitions and are on a run of seven consecutive wins on the road, but if they pull this one off it will be go down as one of their greatest ever comebacks.